Norse mythology is often portrayed quite glamorously in modern media. Very rarely do we see a take on it that results in something quite as dark and grim as this. Hellblade is marketed as being the world’s first AAA indie title. Team Ninja have somehow managed to create a highly unusual game, free from the restrictions of a publisher while still matching the production values that we see in multi-million dollar games. Hellblade is a very unique game that will leave a strong impact on you when you finish.

Before the game even starts, you are prompted to play while wearing headphones. There is a very good reason for this and it is part of what makes this game so unique. The story is based around a woman called Senua. She suffers from psychosis (she hears voices in her head) and through some impressive sound work, you get sucked right into Senuas head to hear them. 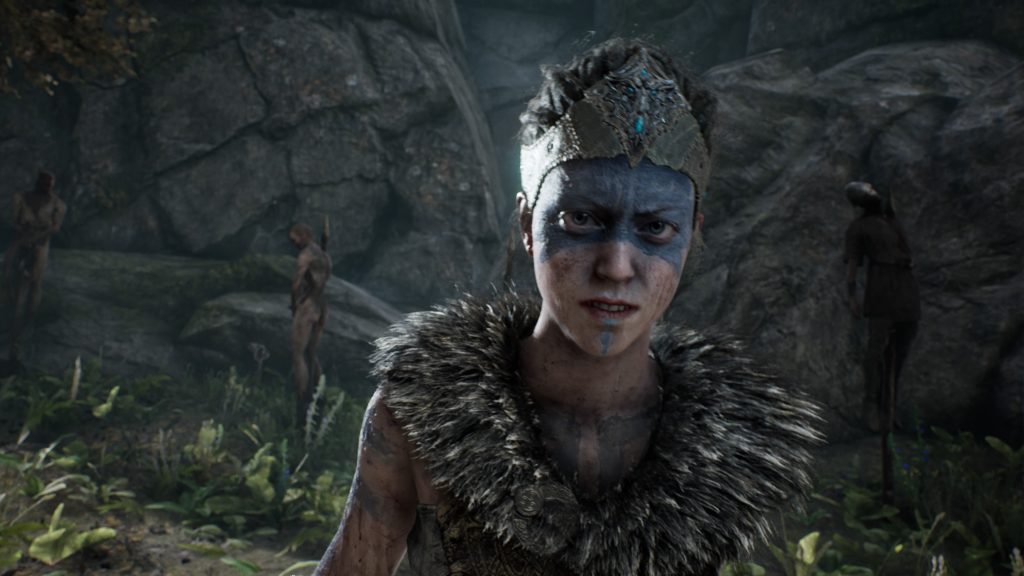 You may have experienced the virtual barber shop video on YouTube at some stage. Put on the headphones, close your eyes and you can feel the barber moving around you as he cuts your hair. The very same thing has been implemented in this game.

As you play you can hear three female voices there with you. During combat or when trying to solve puzzles, they constantly try to beat you down. “You can’t do this”, “give up now”, “she’s going to die”. This is both degrading and uplifting. When you are struggling you feel like the game wants you to die, but then it often drives you to push on. You will quickly grow to hate these voices and wish they would just shut the fuck up! The game developers worked closely with doctors to represent this as best they could. As far as representing the illness goes, It is safe to assume that it was pretty successful.

The main objective of the game is not very clear at first. It opens with Senua rowing her boat down a river before getting out at the shoreline. Dead bodies and destruction litter the area. It seems as though there was a war of some kind, but very little is given to you. The desolation is mostly ignored by Senua as she is currently at war in her own mind. 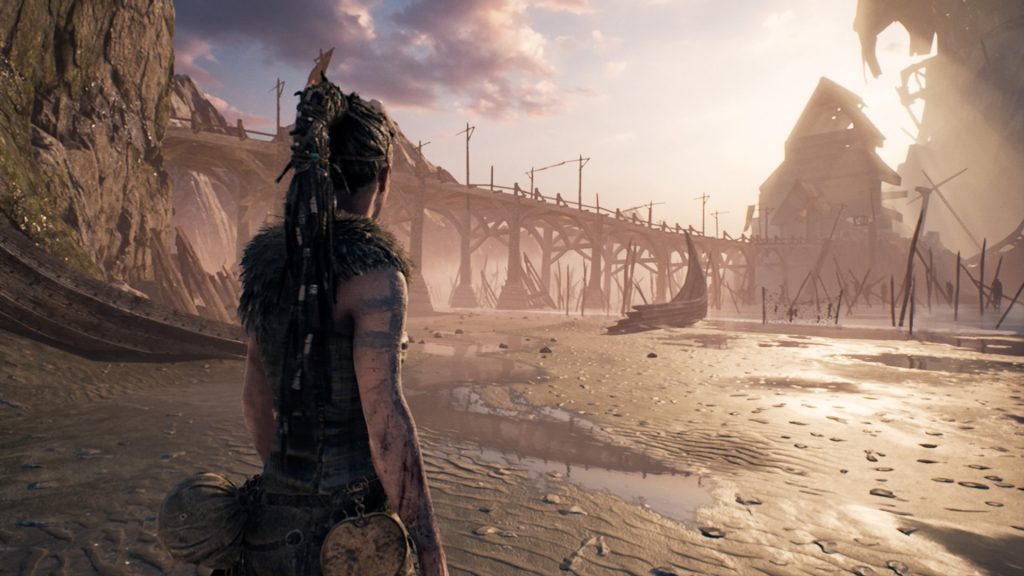 The first thing that stands out is the visuals. The game looks incredibly detailed. The facial animations are so realistic. Senua is in a fragile mental state, it is often hard to guess how she may react to the hurdles she faces. You can always tell how she is feeling through her facial expressions. When you see the anger build up in her eyes, you will be glad that isn’t you on the receiving end.

The setting of the game appears to be back in the correct time period where Norse mythology originated. They don’t put a date on it, but it’s like back around the 13th century. The detailed Celtic carvings in stone and wood pillars look so beautiful that sometimes you forget the rest of the house has burned down. No good comes without some bad in this game!

Although Senua is not in a good place mentally, she is by no means a pushover. Her ability to wield a sword proves this. There are various enemies you encounter through your journey. These combat scenes are the most enjoyable part of the game. Toward the end of the story, you will begin to grow more tired of it. With a limited set of moves and no means to get any new weapons or attacks, boss fights end up becoming a grind of button mashing the same two or three attacks over and over.

While combat is a large focus of the game, the puzzle solving is the predominant gameplay element. The puzzles are enjoyable early on in the game, but after a while they become stale. Almost every area is blocked by a door that requires you to find some Nordic letters hidden around the environment. These would be far more fun if they were used to unlock secret areas rather than them being the main hurdle for progression. A large part of this game literally involves running around looking for the alphabet. Fun now and then, but it is a puzzle type that is used far too often. 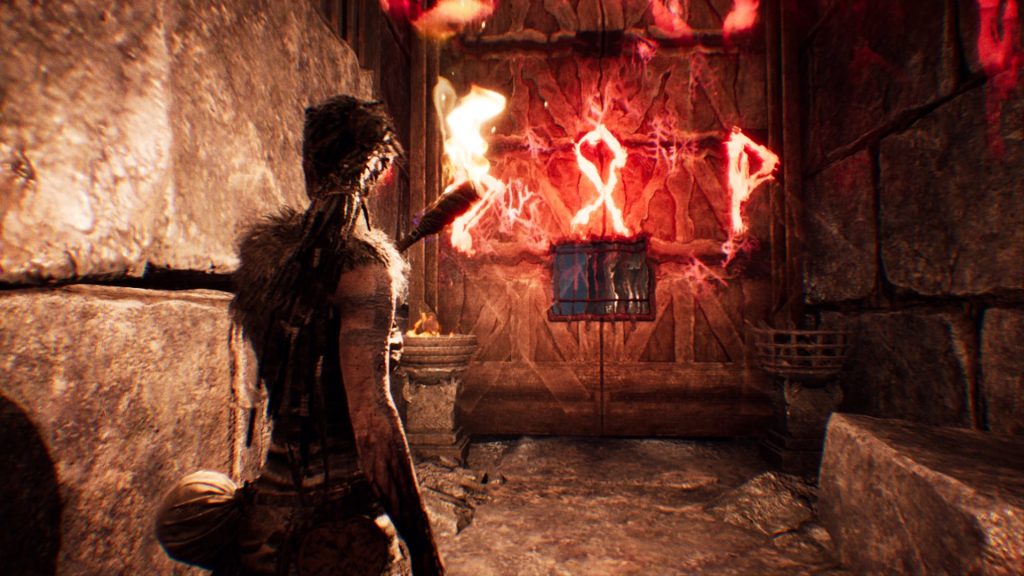 One of the most redeeming parts of the exploration comes from story stones scattered throughout the world. As you walk up to one a man’s voice will begin to tell you a story based on the current events in the story. Sometimes he will give you moral lessons and sometimes they are stories from the mythology. The only downside to them is that you must stay standing next to the stone to hear the story. Walking away will make the voice fade away. I often found myself impatiently waiting for the story to end so I could move on.

Hellblade is not a light-hearted game. The setting is dark and riddled with death, comparable to some aspects of the Dark Souls games. The lead character is suffering throughout the entire journey and it feels like everyone hates you. You begin to feel depressed as you continue to play and fail to find a light at the end of the tunnel. Seeing how Senua always manages to push on despite having every reason to give up is almost like a metaphorical light in this tunnel. Watching how she always fights back even though she can’t win is so admirable. Her will to live and her spirit makes her so much more powerful than her appearance would suggest. A lot of this is not “enjoyable” in the traditional sense but as you reflect upon the game you will see that it really leaves a mark on you.

8/10
A dark and unusual story that is enriched by one of the impressive and unconventional hero’s you will ever see. While some tedious puzzles hamper the experience, there is enough strength in the story to make it worthwhile. Senua’s willpower and strength will be something you admire from start to finish. The combat is limited but fluid. The hard hitting attacks make the occational battle something to look forward to. Hellblade is an unusual game that will have a strong emotional impact on you. They may not necessarily be emotions you want to invoke, but it seems as though this is what the game sets out to achieve. This is a game you are unlikely to forget.
Pros
Cons