Swamp creatures have mutated to monsterous sizes and are out to kill you. How did they get this big? why do they want to kill you? Who cares! All that matters is that you get to blow them all to pieces! Dick Wilde is back and all the swamp creatures that come with it.

Rail shooters do not have a great history outside of the arcade, but with the introduction of VR, things have taken a considerable turn for the better. Dick Wilde 2 places you on a raft where you must travel along streams through mines, swamps and cities, killing every oversized creature in the process.

Dick Wilde 2 is presented as an arcade style shooter. From the main menu, you select a level and once it loads you are on the raft. Once you get to the end, you are back to the main menu. This is great to give you bite sized doses of murder, but the lack of a narrative does cause the game to start feeling a little repetitive after a while. 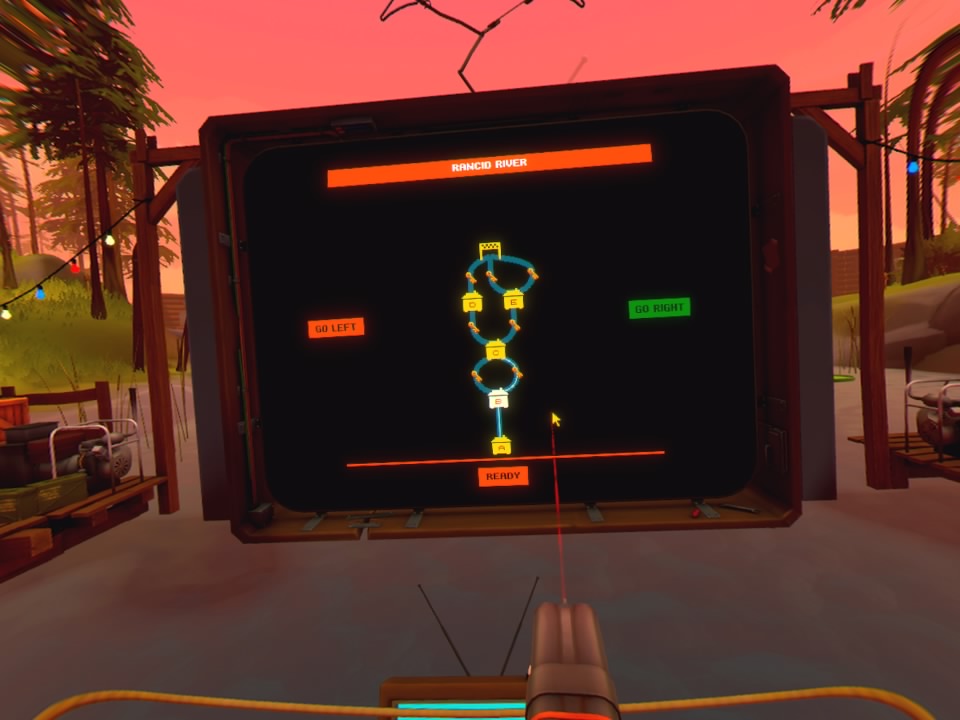 As you play through the levels, you are often presented with a choice of going left or right. This is something similar to what we have seen in games like House of the Dead. The lack of a story becomes quite apparent during these scenarios. Going left or right, really makes no difference. You are still going to get to the same place and the journey along the way is indistinguishable from the other levels set in the same area.

The game is split up into 3 worlds, the reason for which I couldn’t understand. Much like the decisions you make in the levels to go left and right, the difference between each world is difficult to see. Each world has a mix of levels in the swamp, the city and the mines. The same enemies appear and the same scenery is used. There are a few exceptions in world 3 where there are some snowy levels, but this is just the same thing as before but retextured. 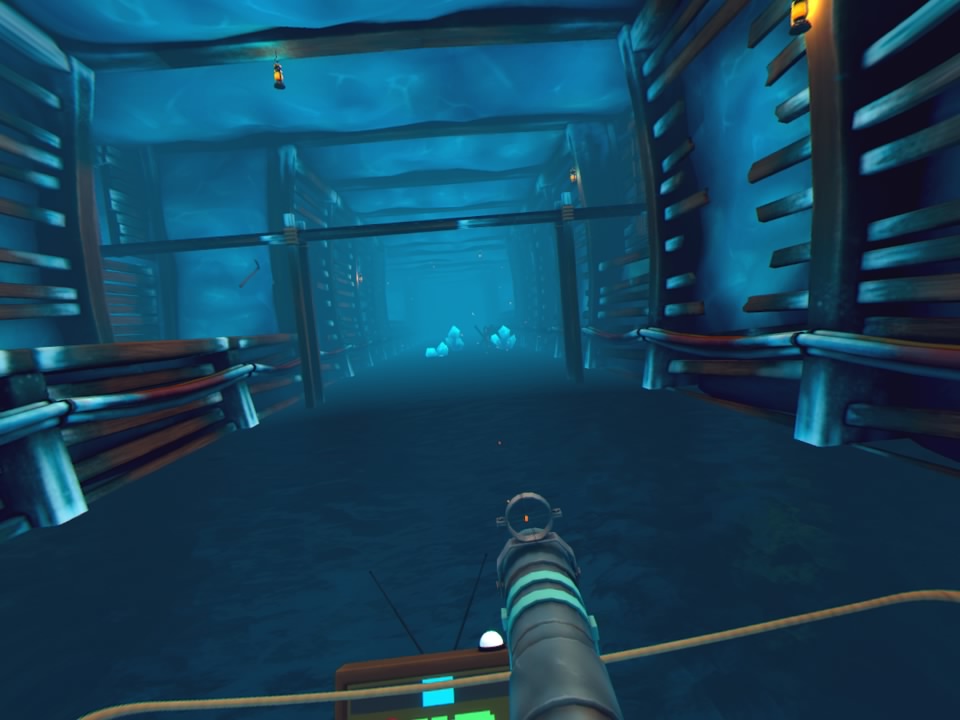 While the game does lack variety in its level design, the shooting mechanics are pretty awesome. I played quite a lot of VR shooters now and Farpoint was the only game that used the PS Aim controller..until now! I forgot to charge the controller so I played most of world 1 using two move controllers. The experience was pretty much as good as you would expect it to be. Gun in each hand and a laser to show you where you are going to fire. The aim controller is where things got awesome.

The game has a unique set of two handed weapons that are used when you use the PS Aim controller. I found these weapons to be way more fun to use, mainly due to how it feels to hold the bigger gun. There was no real issue with the shooting, except for when the raft needed to turn corners. Every time the raft turned, the gun would not move with the raft and would now be aiming in the wrong direction. I would aim directly at the VR camera and in game, I would be aiming to the left. To fix this I had to rotate the gun around a bit to reset it. Not a huge deal, but when a bunch of creatures are jumping at you, the time it takes to reset the aiming, causes you to take a lot of damage. 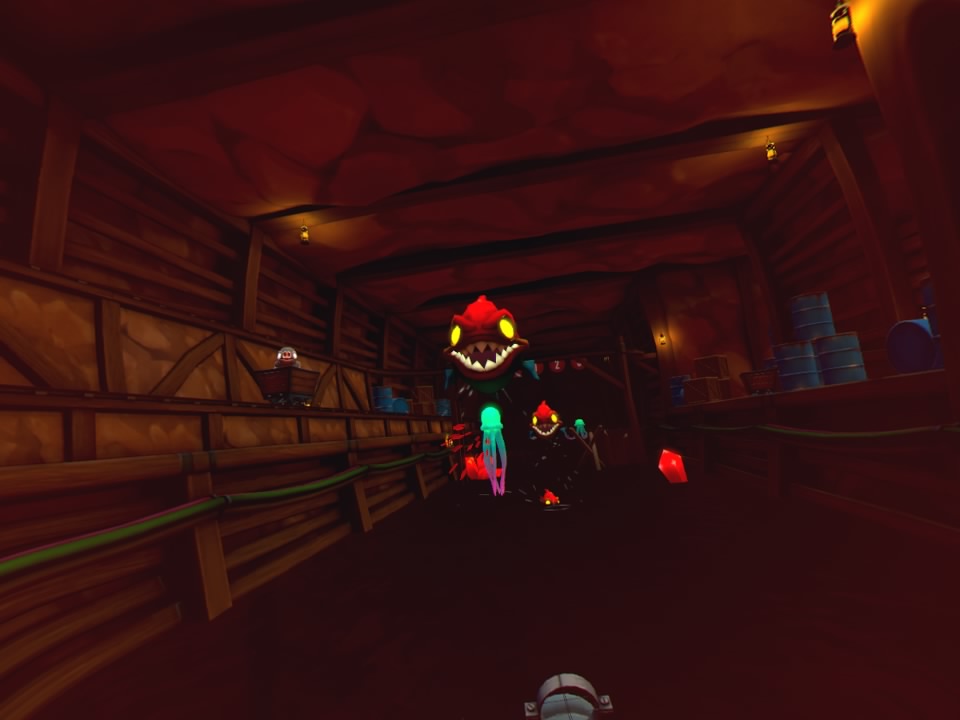 The first Dick Wilde was known for having a steep difficulty level. Dick Wilde 2 is by no means an easy game, but it feels quite fair. Since the levels are scripted, you can memorise where the monsters are be prepared for them if you are having trouble. This does get a bit annoying with the boss battles as you need to play through the level each time you die just to get to the boss. It wouldn’t be so bad if the entire boss level was unique, but the first part of the level, like the rest of the levels, lack any unique elements to them.

Toward the end of world 3, I had gotten fairly bored of the game. The levels weren’t throwing anything new at me and since the difficulty had ramped up, I was playing the same levels over and over. At this point I decided to check out the multiplayer game mode.

The online coop allows someone else online to share the raft with you. Both of you travel down the stream, blowing the shit out of everything as a TEAM! It works very well and I did not experience any lag. It was also helpful to get through some of the more difficult levels that are hard to complete alone. I was able to complete a few of the levels in world 3 in coop that I was having trouble with alone. The main issue I had with the coop is that it amplified the aiming issue I experienced in single player when the raft moved. It had gotten so bad at times where I was aiming 90 degrees to the right and the gun in game was pointing right ahead. It was very uncomfortable to have my head looking one direction and my body turned a completely different direction.

6.5/10
As far as rail shooters go, Dick Wilde doesn’t try to do anything unique or unusual. It has some solid shooting built on a fairly generic theme. The levels are quite repetitive and mundane, but if you shake up your play style with different weapons it will prolong the enjoyment quite a bit. Once you reach the end of the fun in single player, the online multiplayer will help spice things up but it can only do so much to cover up the fact that you are just playing the same 3 or 4 level designs over and over again.
Pros
Cons