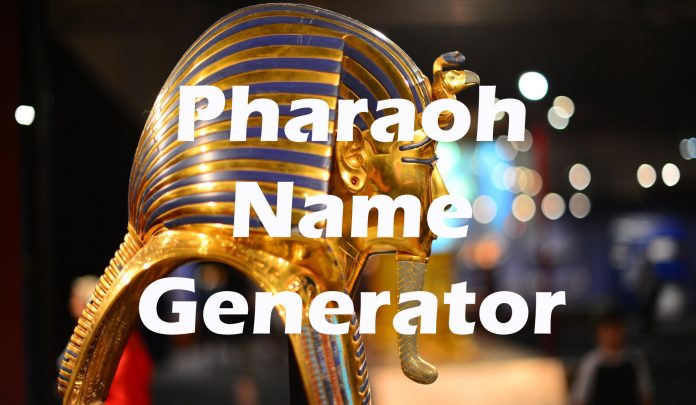 Pharaohs were like the kings of ancient Egypt. They possessed immense wealth and had an incredible amount of power. Signs of this can be seen from the decoration of their tombs and the treasures they were buried with. Let’s not also forget that massive pyramids were built as tombs for these people. They were treated like gods.

This page contains a pharaoh name generator. Clicking the button below will give you lots of different ideas you can use for Pharoah names. Use the toggle to switch between male and female names. Even though the average women had little say in ancient Egypt, female leaders did exist.

Did Pharaohs have last names?

When you hear any of the most well known Pharaohs in ancient Egyptian culture, they don’t have traditional names that we are all familiar with. Much like the medieval culture that we saw in lots of fantasy stories, they used a surname that referenced their parents. X son of Y or something along these lines. This was very common in most ancient cultures and was also the case in ancient Egypt.

This doesn’t mean there aren’t odd examples where people have something similar to what we know of today. For the most part, though, Pharaoh’s of Ancient Egypt didn’t use the same types of surnames today. The suggestions that this Pharaoh name generator comes up with will fit the more traditional style of naming they used back then. You could probably drop the “Son of” or “Daughter of” part in most scenarios.

So to answer the question, no, Pharaohs did not have surnames, at least not traditional surnames that we are familiar with in modern culture.

Were there Female Pharaohs?

Like most ancient cultures, women had very little power in Egypt. They were left to raise the children while the men were the ones who got to have the power and control. In saying this, there are documented exampled of female Pharaohs. There are quite a few examples of women making their way to positions of power in the ancient Egyptian culture.

The most well-known female in a powerful position would be Queen Nefertiti. She was not a pharaoh but she was a very well known leader at the time and has remained one of the most well-known women of power in Egypt. The gender controls on the tool above will allow you to create female names, so now is a perfect time to balance the numbers and create a memorable female leader.