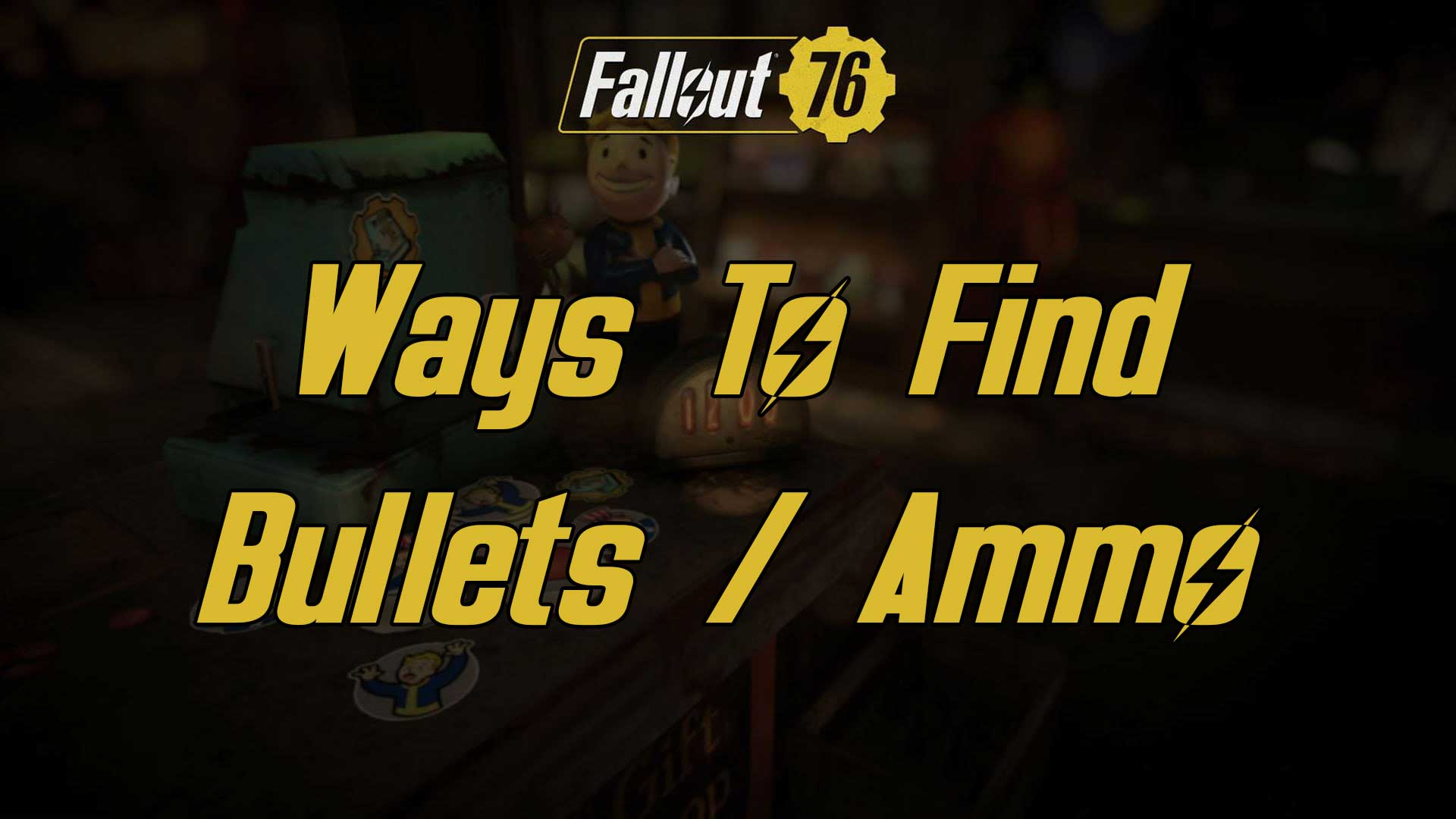 Ammo in a nuclear wasteland is naturally going to be in short supply. In past Fallout games, ammo wasn’t exactly plentiful, but you never really had to deal with a shortage of it either. Fallout 76 has changed this trend and has made ammo drops from enemies much smaller and less common. If you are hoping to find enough ammo to survive out in the wild, you are quickly going to run out. This guide will give you some useful help and tips for getting ammo easily in Fallout 76.

Before discussing the methods to find easy ammo in Fallout 76, it is worth talking about melee weapons. There are specific builds out there that work really well for melee weapons that make you almost invincible. If you want to avoid the issues dealing with ammo shortages completely, this is something that you should consider.

Melee builds are not for everyone, but you can still make good use of one. Particularly if you want to go killing lots of low-level enemies in order to get ammo from them. Why waste ammo killing them when they will do very little damage and you can kill them with one hit of a sword.

Generally speaking, you will only get ammo from enemies who are wielding guns. A scorched with a hatchet is unlikely to give you ammo. If you are trying to grind some XP in Fallout 76, you will likely be told to go to some Super Mutant camps or find some Mole Miners to kill. Doing this can double up as a great method to get some easy ammo

There are lots of low-level areas of the game that will contain mutants and scorched that will be level 10-20. If you are much higher, you can easily go back to these locations and quite easily wipe out the entire camp using a machete. Using a melee weapon means you will spend no ammo and end up with lots of shotgun, .306 and a few other random ammo types.

Crafting Ammo At A Tinkers Workbench

You will not be able to craft this workbench from level 1, you will need to find plans if you want to have one at your C.A.M.P. These workbenches are quite common across the map and most higher level players will have one at their camp that you can make use of.

In order to craft bullets, you will need, at a minimum, lead and gunpowder. Some ammo types will require additional materials like shotgun shells for example which also require plastic. If you need some help tracking down gunpowder you can check out this guide. Super mutants often drop it so you could make use of the method above this to grind XP and get some easy gunpowder.

There is a perk called Ammosmith under the agility S.P.E.C.I.A.L tree that will allow you to produce +80% ammo at a workbench for no extra cost. This is super valuable to get the most value for the gunpowder you spend producing more bullets for your guns. This perk card is unlocked at level 34 so it is not something low-level players can take advantage of just yet.

There are two types of ammo factories. There is a large fixed machine that is part of the munitions factory workshop in the northeast corner of the map. Once you capture this location, you will be able to power the machine here for 20 power and it will produce a range of different ammo types. All you need to do is select the ammo type from the terminal and you will get free ammo printed every few minutes.

There is a very useful glitch with this that will allow you to make a blueprint of the ammo factory which you can read about here. Once you have duplicated the machine using a blueprint, you will be able to construct it at your C.A.M.P and have an infinite supply of free ammo without having to worry about someone taking your workshop from you.

There is another type of ammo production machine that can be unlocked when you reach max reputation with the raiders. This is similar to the ammo factory at the munitions factory.

Player C.A.M.Ps are marked on the game map with a green cap icon when they contain a vending machine. These icons turn orange when they are in your group. If you travel here, there is a good chance this player is selling ammo. Ammo tends to sell out quick, but it is worth checking the camps that you come across. You may find a player who does not use shotguns and has decided to sell their entire inventory of 2000 shells for 1 cap each.

Players are unable to sell bullets to vendors so selling them to players is the only option. You can find a lot of cheap ammo by checking the vending machines at player camps.

You will often find that there is ammo and aid vending machines at train stations. These also show up in some large settlements too like foundation. These are machines where you can purchase bullets for caps. There is a limited supply and they can often be expensive but they are a last resort if you are really stuck and don’t have time to go farming supplies.

How Do You Get More 2mm EC Gauss Ammo?

If you have built an Ammo factory you may think that all of your ammo needs are finally sorted…until you realise that it is not possible to generate 2mm EC Gauss ammo. What Gives!!?? There isn’t really a good reason for this. Gauss ammo does cost a few more units of steel and lead than normal but it doesn’t explain why the factory does not make it.

It is not possible to directly print EC Gauss ammo at Grafton steel, but there are specific machines there that work similarly to the fusion core generator at Poseidon power. These machines will give you an infinite supply of steel.

If you use a lead extractor and a steel extractor at this workshop, you will find yourself with an infinite supply of steel and lead. Head back every now and then to gather the metals before the machine hits the limit it can hold for you. Have a tinkers workbench nearby and you will be able to start crafting a steady supply of EC Gauss ammo while you are off exploring the wasteland.