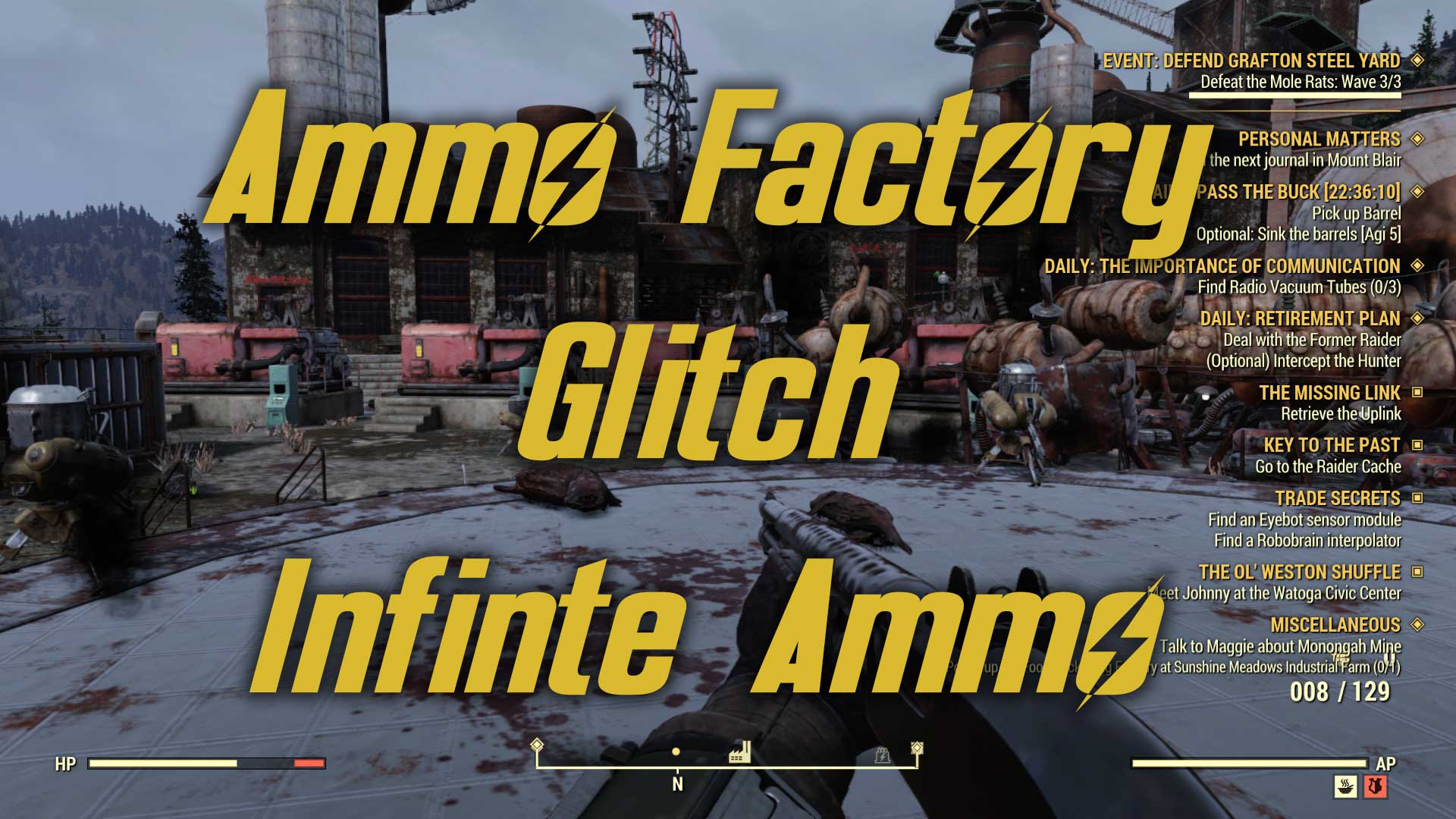 Ammo is the main consumable item in Fallout 76 that you will need to pay a lot of attention to. Ammo runs out quickly if you take part in lots of events. Crafting more at a tinkers workbench is not difficult, so long as you have all of the resources you need. Spending hours hunting for lead can get a bit boring. This is where the munition factory blueprint glitch is going to make your life super easy.

If you have discovered the munitions factory in the North East of the map, you will discover that there is actually a machine that will print out ammo. You use the terminal and it will just print an infinite amount of the ammo selected over time. It works the same as any of the other extractor machines that you build at your camp or workshops.

Normally, this machine is exclusive to the workshop, but there is a glitch you can use to duplicate the Ammunition Factory and save it to a blueprint. This allows you to build the machine anywhere you like and generate an ammo farm where you can get an infinite supply of any ammo without having to put in any work at all.

Warning: This is considered cheating and for those that blatantly abuse it to the point where you are crashing the server, you are likely to get caught and have your account banned. Please be careful and follow the steps below to avoid getting caught.

Precautions To Take Before Building An Ammo Farm

Cheating is cheating and we do not know for sure how Bethesda will react to this. It is unlikely they will ban everyone who uses this glitch, they will ban those who do it to the point where it damages the game’s economy or begins to cause trouble for other players. By this I mean you are charging other players money to trade ammo that you obtained using this glitch or are causing the server to crash because you have built so many.

You can’t delete the factory when you build it at your CAMP. It is best to avoid building it here. Build the ammo farm at a workshop. When you log off, the workshop is wiped, along with any evidence that you ever built this. Since workshops also give you a small construction budget, you won’t find yourself at a huge loss when you do this. Yes, it is nicer to build a massive camp with a huge farm, but why do you need this much ammo if you do not plan on selling it?

How To Build A Munition Factory Anywhere

To build a munition factory at your base, you will need to perform the blueprint glitch. This is easy to do but it will have a level cap as the area of the map is a high-level area. You will need to clear out some higher-level super mutants from the factory. You might need the ammo badly in the early stages of the game, but this will be something you have to save until you are stronger.

Travel To The Converted Munitions Factory & Capture It

The converted munitions factory contains the ammunition factory machine that you need to duplicate. It is found in the northeast section of the map. It is a long walk for new players with a few tough enemies to kill along the way. Make sure you have plenty of ammo & supplies to get there in the first place.

Once you get here, kill all of the enemies, likely super mutants. Once all of them are dead, you will be able to capture the workshop.

This part has a bit of a nack to it, but it is easy enough. Once you have the workshop captured, enter the build mode. Walk over to the machine and target the wire that connects to the nearby terminal. You will be able to select this machine and it will make the items turn a blue/gray colour. Once this is done, save the blueprint. You can check the blueprint to verify that the machine was captured correctly.

The video below will help you figure out the nack to correctly capture the machine into the blueprint so you can replicate it later.

Once you have correctly captured the ammo factory into a blueprint, you will be able to construct an ammo farm at any workshop in the game. You can also do it at your camp, but this is discouraged as you cant delete a factory once it has been placed.

Since the factory is not designed to be duplicated, there are some hacks you need to do to get this to function correctly. There is a strict way that you need to build the factory to make it produce ammo.

Chain a series of factories together

Using cables, you will need to connect a series of ammo factories together. You will then need to use a generator(s) to provide power by connecting it to the first factory in the chain. This part is important as the terminals will not work correctly if you get this wrong and you will only be able to generate 10mm ammo.

The image below will show you the correct way to structure them. I have used four in this example but you could chain more than this if you have the means to get enough power to them.

Use the Last Terminal To Select Ammo Type

If you try to go to some of the terminals, you will notice they get stuck initialising. You will not be able to interact with most of the terminals. To make this work, you will need to go to the final ammo factory in the chain. The terminal will work correctly here and you can select the ammo type. Once the type has been set here, all other machines in the chain will generate the same type of ammo.

Create chains of machines to create different types of ammo if you need multiple instead of having them all create the same.

When you repair a power plant, special terminals in workshops will become active that grant you a set amount of free power. This is normally enough to power 6 munition factories without needing to construct a generator.

You can capture the Poseidon power plant very easily alone and once this is captured, all of the workshops in the region will be able to take advantage of the power connections to give free power, without the need of generators to the things you build at the camp.

An added bonus of doing this is that you might get plans for a fusion reactor if you do not have it already. Building these to power your ammo farm is a huge bonus in terms of components and space.

Since this exploit is quite difficult to get right at times, there are bound to be some questions that people end up asking in the comments. To save time, I will cover the most common questions have and the common issues people encounter when attempting to set up the ammo farm.

The Ammo Factory Isn’t Showing In The Blueprint

This a common problem for almost everyone who does it for the first time. You select the wire, save the blueprint, but the factory is missing. You probably aren’t doing anything very wrong, this is just a difficult step to get right. Watch the video above if you need detailed imagery showing how to perfectly capture the building in the blueprint plans. Once you have it captured, you are good to go!

Will I Get Banned For Using This?

There is no way of knowing. I have seen people abusing the hell out of this with massive farms creating endless amounts of bullets to the point where the server is crippled. These people seem to get away with it. If you are just building a small number to refill your ammo stash, there shouldn’t be any reason why you get caught and punished. With this being said, this exploit is not something the developers wanted you to do and as such, may result in negative actions being taken against you. Use this at your own risk.

The Terminal Is Stuck Initialising?

You need to ensure that you are interacting with the correct factory. If you have 4 factories in a chain, the terminal will only work on one of them. This should be the final factory in the chain. The image below will explain how the terminal can be accessed.