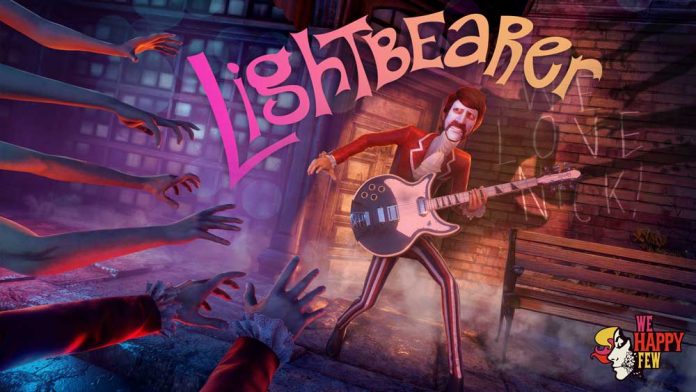 What happens when you mix Austin Powers with Motley Crue? You get the Lightbearer DLC for We Happy Few. Even amid the oppressive world of Wellington Wells, there is room for sex, drugs and rock n’ roll!

Lightbearer deliveres something completely new for We Happy Few. We still have the creepy Bobbies and a drugged up population, but the game feels completely new. It is very rare to see game DLC do something like this and it is just another example of the ridiculous levels of creativity we see from Compulsion Games.

Lightbearer follows the story of a man named Nick Lightbearer. He is a famous guitarist and songwriter whos rock and roll lifestyle is starting to get the better of him. The fans don’t seem to care. Everywhere you go there is a horde of screaming girls behind police barriers. You often find yourself having to sneak through air vents in order to get past unnoticed.

Almost all of the gameplay elements from the base game have been removed. A new set of appropriately strange things have been put in their place. It’s these things that turn this DLC from being good to amazing. Be sure to expect a lot of strange things in this trippy adventure.

Combat is the first thing that has had a major change. Every now and then you will encounter some fans or camera men who will attack you. Your main weapon is your guitar, but it is not used as a blunt force weapon. Instead you must play your guitar to defeat your enemies.

Nick is able to serenade people with beautiful melodies. Once they fall in love with you, they will defend you by fighting off other hostile people. Strumming your guitar will cause an orb of musical energy to shoot out of your guitar. Shooting these at enemies will eventually knock them out. You can hold it to produce a charged chord which will knock people off their feet.

Later on you will unlock records as a weapon which you use like they are ninja stars. Every time you throw them it will remind you of that scene from Shaun of the Dead (if you have seen that movie) where they are trying to kill a zombie in the garden by throwing records at it. It is a lot of fun using these, mainly because it makes no sense at all. Expect a lot of that with this DLC.

We can only assume that Nick is off his head most of the time because a lot of weird things happen. There is no quest map or markers that show you where you need to go. If you strum your guitar in front of one of the many golden statues of Nick, It will come to life and point in the direction you must go. Every time you do it, you are reminded that you are playing as a guy who spends a very small amount of his time sober.

Survival and crafting has been stripped down a lot. You can no longer create things, except sweet sweet music of course. Survival is simple, when your health is low, take some drugs, drink some alcohol of have some coffee. Anything that is normally unhealthy for people is healthy for Nick.

There are times in the story where Nick needs to take some experimental drugs. Drugs that really mess him up. The quest is telling you to go upstairs to your room, but the elevator is trying to eat you!

On the other end of the hardcore rock n’ roll lifestyle is the hippy Austin Powers style activities. Pole dancing, lots of talk about shagging and just look at the mans outfit!

If you are looking for more of what we had in the base game, you will not find it in this DLC. Lightbearer takes the game in a hilarious new direction. It does not take itself seriously and you shouldn’t either. This is a one of a kind DLC that needs to be seen to really understand what you are getting yourself in for. It is hands down one of the best story based DLC add ons you can play.

9/10
Lightbearer brings a lot of new ideas to the table and manages to provide a highly humorous and entertaining experience. It was a risk to deviate so far from the original game but it has been executed so well that your laughter will make you love Nick Lightbearer so much that you won’t want it to end. The groovy style & setting combined with all the drug taking will give you a true rollercoaster experience with lots of weird stuff and lots of laughs. DLC often gives us more of the same. With Lightbearer you will get something completely now and highly entertaining.
Pros
Cons