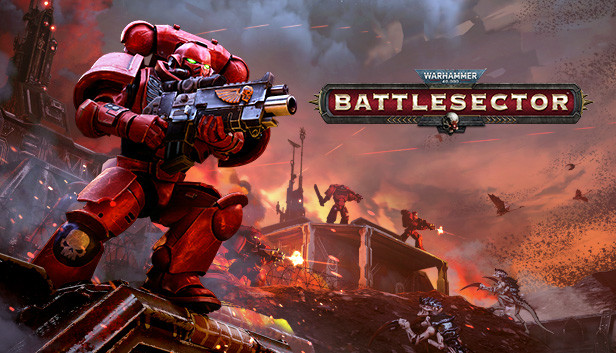 Warhammer 40k is no stranger to video games, we have so many spin-offs and new titles now that it is hard to keep track. Warhammer Battlesector is the latest entry that aims to stay true to the tabletop roots while delivering an exciting campaign against the Tyranids. Will this be a win for the imperium or tossed aside with the heretics?

The premise, which lacks any sort of high calibre cinematics or a showpiece to suck you in, lines you up as a space marine commander who must build a squad to defeat the Tyranid threat in a variety of different skirmishes. The gameplay is bang on what you would expect for a turn-based title and the Warhammer influences are a pretty awesome combination. The game feels quite natural and is a fantastic genre for the franchise to be based on.

Before you get started, you should check out the game’s tutorial to learn the ropes. This is where the problems begin. Various UI glitches hinder the experience of learning and often result in you having no idea what you just did to complete the task at hand.

Fortunately, many of these UI issues are not present in the main campaign, but it still doesn’t excuse such atrocious bugs to greet you the moment you start playing.

It’s quite clear from the get-go that this is not the same high budget Warhammer games we have seen in the past. The visual quality is quite poor and regularly suffers severe screen tearing and a lack of anti-aliasing. The dull maps early on in the campaign don’t help with this either.

The audio is not much better. A lack of 5.1 audio support, which is pretty much a standard these days was a rather glaring omission. Stereo audio only! To top this off, the voice work for the marines has been distorted to the point where half of them sound like Daleks from Doctor Who. Fortunately, the saving grace comes from the narration between missions which do a fantastic job at setting the tone of the events to come.

Games like XCOM have proven that turn-based games can work well on consoles and be a lot of fun. Warhammer Battlesector seems to have taken little inspiration from these games as the UI is quite clunky and takes a lot of getting used to. It is often difficult to know what command you are using and will often issue a command by accident when you had intended on just selecting a unit. The UI was clearly built for a mouse and was converted rather poorly to work with a controller.

The biggest issue you are going to hit is when the UI fails to let you know what is currently selected. Pressing X may select an enemy but it may also trigger an attack that you didn’t know was lined up. If is very frustrating to waste moves when it wasn’t clear what you currently had lined up. There are no quick controller mappings to perform common actions or even to reset things. Something like the ability to move units in bulk would be so useful rather than having to slowly navigate up and back to move each enemy 1 by 1.

When it comes to slow movements, the enemy turn is such an insulting waste of your time. Having to sit there while the AI opponent makes moves that are off-screen is so frustrating. Even for the moves, they make that you can see, it is so incredibly slow. There is no fast forward. You may as well go make your dinner during the enemy turn on some of the big maps when you have to wait for 20+ units to move.

One issue that no amount of processing power or input devices will fix is the rather disappointing scale of the battles. It’s not surprising considering the game struggles to maintain a steady performance on the smaller battles. There are some serious optimisations issues when a game for a last-gen console runs this poorly on a system that is so much more powerful than the hardware it was designed for. The maps do scale up in the latter part of the campaign but there is a huge lack of grandeur to the skirmishes.

The thing about the tabletop game is if players could safely have fire, water, explosions, lasers and over the top realistic detailed settings, they sure as hell would. You are likely playing this game alone, we need something to make up for the lack of socialising. The maps feel about as living as Command & Conquer did 15 years ago. The maps are just not expansive or diverse enough to make the campaign missions feel quite as big and impactful that the story narration builds them up to be.

Despite the game having a lot of shortcomings that made the game feel a little rushed, you may find it very hard to pull yourself away. You will very quickly fall into a pattern of “one more battle” and before you know it, you have been playing for hours. The combat and strategy is just so satisfying and really makes you put so much thought and effort into your moves.

What is most satisfying is how you see your own strategy change and improve. Remember how a decision in the past resulted in you losing a unit. The satisfaction of taking a risky move that may spread you thin for a few turns only for it to result in everyone making it to the other end where you can overwhelm the enemy with style is what this game is all about. You have so much control over your strategy and how you approach battles.

The biggest flaw of the combat is a lack of a cover system. If an enemy unit is behind a structure, they get a defence bonus. If your units are up against a wall, the enemy gets a defence bonus. Space marines should be able to take cover and shoot over or around walls and structures to give themselves a defence bonus that doesn’t also give the enemy an advantage.

Tyranids are always going to be an interesting enemy for Space Marines to battle against. The voice work between each mission that will give you a very well narrated breakdown of current events and opinions of the various commanders often excite you for what is to come. The events of the missions often play out in a satisfying way but you are required to use a little too much imagination to make the battles match up to the tone the story sets. A video game should exceed your imagination when it comes to art direction and design. Warhammer Battlesector is just too dated from a visual perspective.

If some effort could be put into the visual presentation, performance and some quality of life improvements, this could be one of the best Warhammer 40k game releases since Dawn of War.

7/10
When you take tabletop Warhammer 40k and turn it into a video game, you naturally lose a few things but you also gain just as much. The advantage of being able to blow players away with impressive battlefields and special effects is not something this game takes full advantage of and was its greatest weakness. Warhammer Battlesector is still a very satisfying game to play due to some solid strategy and tactics you can take advantage of along with an interesting story. It is just a shame the poor visuals and technical issues could not have been overcome.
Pros
Cons