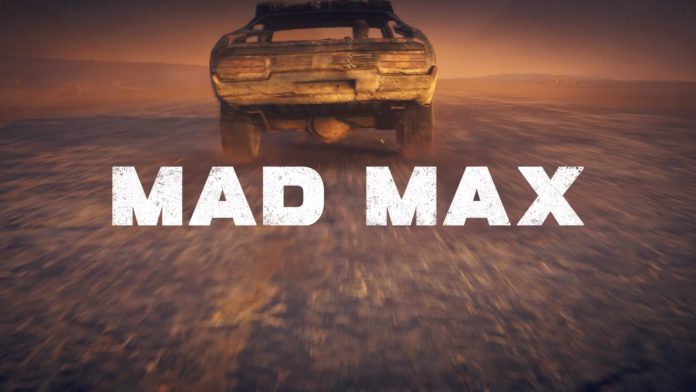 Games based on movies are rarely ever enjoyable. Short development time frames usually result in a low quality, rushed game that feels like a shameless cash in. Mad Max is a game that stands out from the rest of the shoddy movie games in that it is actually quite good!

Max Max is a very unusual take on a post-apocalyptic world. All traces of modern civilization have been erased. An insane culture obsessed with vehicles, oil and violence has risen from the ashes. The game is influenced by the movie but it is not a copy of it. It has its own unique story, villain and characters.

The Mad Max movies are not known for their gripping and deep story lines and the game is no exception. All the entertainment comes from the insane action. The video game falls in line with this. The story starts out very much like the movie where your car is stolen except now, you are left for dead. Somehow you survive and now it is time for revenge.

The revenge story is not really a standout idea, it serves its purpose to progress the story but it isn’t something that has many twists and turns. The real entertainment kicks in about 30 mins after the opening scene. You no longer have a car and you badly need one. Having been fortunate enough to meet a handy mechanic, he guides you through the process of creating your own.

Your new car is named the Magnum Opus. It’s rough and ready at first, but as you progress through the story missions, you get new tools and upgrades for the car that turn it into a beast! A harpoon to impale people and rip down structures. Exhaust pipes that blow out flames to light other vehicles and people on fire. Armor plating, tire spikes and many other cool enhancements. By the time you have your vehicle maxed out, you will be almost unstoppable. 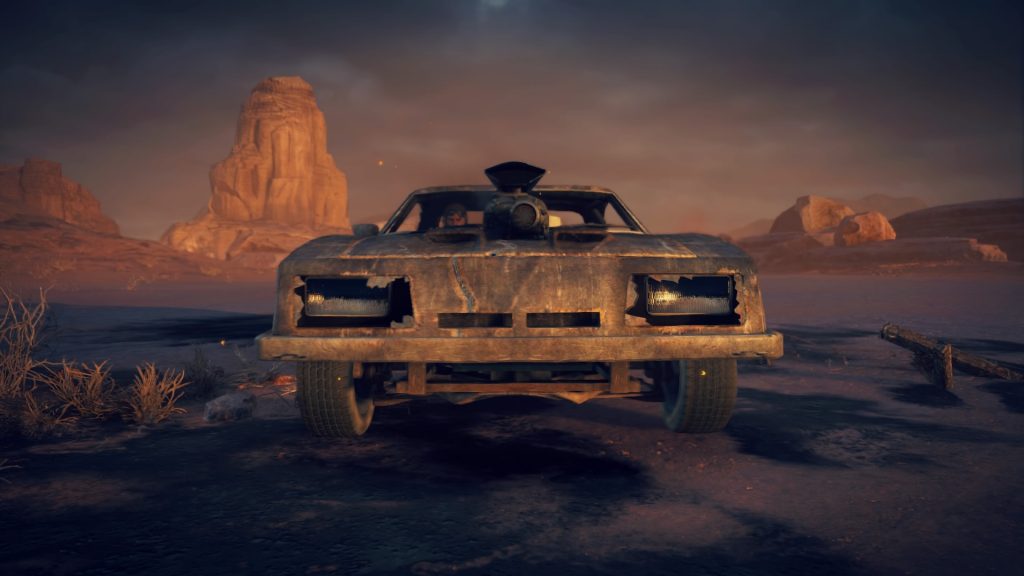 The main story of the game serves more as a way to make you more familiar with the society of the wasteland. The ultimate goal of revenge is there, but there isn’t any reason for the player to hate the main antagonist. There are plenty of other things I hated more. The pacing of the story feels a bit off at times. At one stage I needed to downgrade my vehicle to meet an objective. If the mission requires me to have level 1 spikes, why can’t I use level 2 spikes? So you downgrade the vehicle, the objective is met, you re-upgrade and progress with the mission. There is no hard requirement to use the downgraded vehicle, the objectives are just unable to detect if you have better than the required upgrades.

To purchase all these upgrades, you need to find scrap metal. This is the main currency in this game. It doesn’t make much sense really since there is metal everywhere, but only small amounts are considered “scrap metal”. Why can’t regular metal be used to upgrade your vehicle? You get scrap metal in various ways. You will be quite poor early on in the game but once you have captured a few bases, you will never be short.

Base captures are the most enjoyable aspect of this game. Throughout the wasteland you will find fortified structures that are occupied by various gangs. You start by using the Magnum Opus to destroy these fortifications, allowing you to get inside. The base will have some kind of aim like “Destroy the oil pump” or “Kill all gang members”. Once complete, the base becomes yours. Every few hours the base will reward you with some scrap metal.

Each region of the map will have a larger base called a fortress. You need to capture these as part of the main story. Once captured there will be a series of fetch missions to obtain important components to improve the fortress. These improvements will grant you an increased amount of scrap, but also give extra perks. A cleanup squad will automatically harvest scrap from vehicles you destroy in this region. Water tanks, gas tanks and maggot farms will refill your water, fuel and food supply upon visiting the fortress. 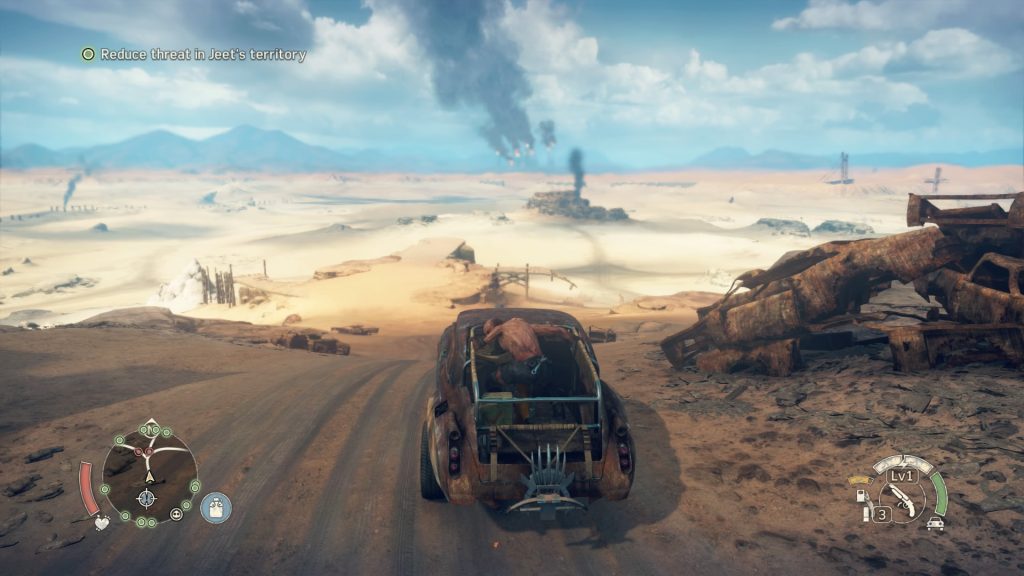 The benefits from the fortresses are great, but there are too many fortresses to make it worth while. By the time you have fully upgraded the fortress, all the missions in this area are gone. You have no reason to be spending any time in this area once everything is done. All of the perks you have worked to obtain are no longer any use to you as the next area has a new fortress and none of the perks are shared between them. It would have worked better if these were global research tasks that cost a little more but were shared across the entire map. So lets say level 1 water tanks refill 25% of your water when you visit. Once you get to level 4 its 100%. Same end result but shared across the map.

The wasteland is fairly large but since you spend most of the time in your car, you can drive from top to bottom in less than 10 minutes. During this drive the framerate will regularly dip to a complete crawl. During battles against other cars it gets quite frustrating as it drops to the point where it looks like a slideshow.

On top of bases and fortresses the wasteland is filled with smaller dungeons and camps to explore. Some of these offer some great rewards and are often a lot of fun to complete, particularly the dungeons that are part of side quests. The only problem with the dungeons is the lack of a quick exit. Most games allow you to drop a ladder or something that allows you to escape the dungeon quickly once you get to the very end. It gets annoying for the longer dungeons when you need to back track the entire way just to get out.

Most of your time playing this game will be done inside of the Magnum Opus. Outside of the car Max is good for one thing, fighting (Fightin’ round the world Tugga’). Early on in the game you can punch and that’s about it. As you progress you unlock more moves and increase your strength. The combat is quite similar to the Batman Arkham games, but not quite as smooth and responsive. Enemies will surround you and you need to dodge, counter and attack with perfect timing to take everyone out.

Guns and melee weapons are not something you rely on too heavily in combat. Max can pick up melee weapons and use them but you can’t store them in your inventory. They often break after 3 or 4 hits so it is best to stick with your fists for the most part. Max also has a shotgun, but ammo is very rare and without any upgrades, Max can only carry 2 shells at a time. A shotgun blast is not enough to kill someone most of the time, so this is also something that isn’t worth using in combat.

Traditionally games like this would have experience points as a way to improve your character. The system in Mad Max is slightly different. The game has a series of challenges, some of these are one time and others repeat. For example, “get a 25 hit combo” is a reoccurring challenge and “open 3 muthaloot crates” is a one-time thing. For each challenge you complete you get a token. One token can be used to upgrade a character stat that can increase health, improve melee damage or improve various other common character improvements.

Mad Max falls short in a few areas but overall it’s a fun game that is a lot of fun. If you are new to the franchise, this game will give you a nice insight to the universe and definitely works as a way to sell the movies.

7.5/10
For a game based on a move, Mad Max was a surprising treat. The vehicle combat was a lot of fun and very intense once you have unlocked the upgrades.. The melee combat also works quite well and makes the base attacks really enjoyable. The story is nothing to sing about, but does a good job at filling you in on how the world works now that modern civilization is a thing of the past. The visual quality is ok, but regular and severe frame rate drops impact the game quite hard when the action is heating up. Base and fortress attacks will keep you entertained for a while but the work to build them up to the point where you can make use of them is a waste since you have to leave the area once it is complete.
Pros
Cons