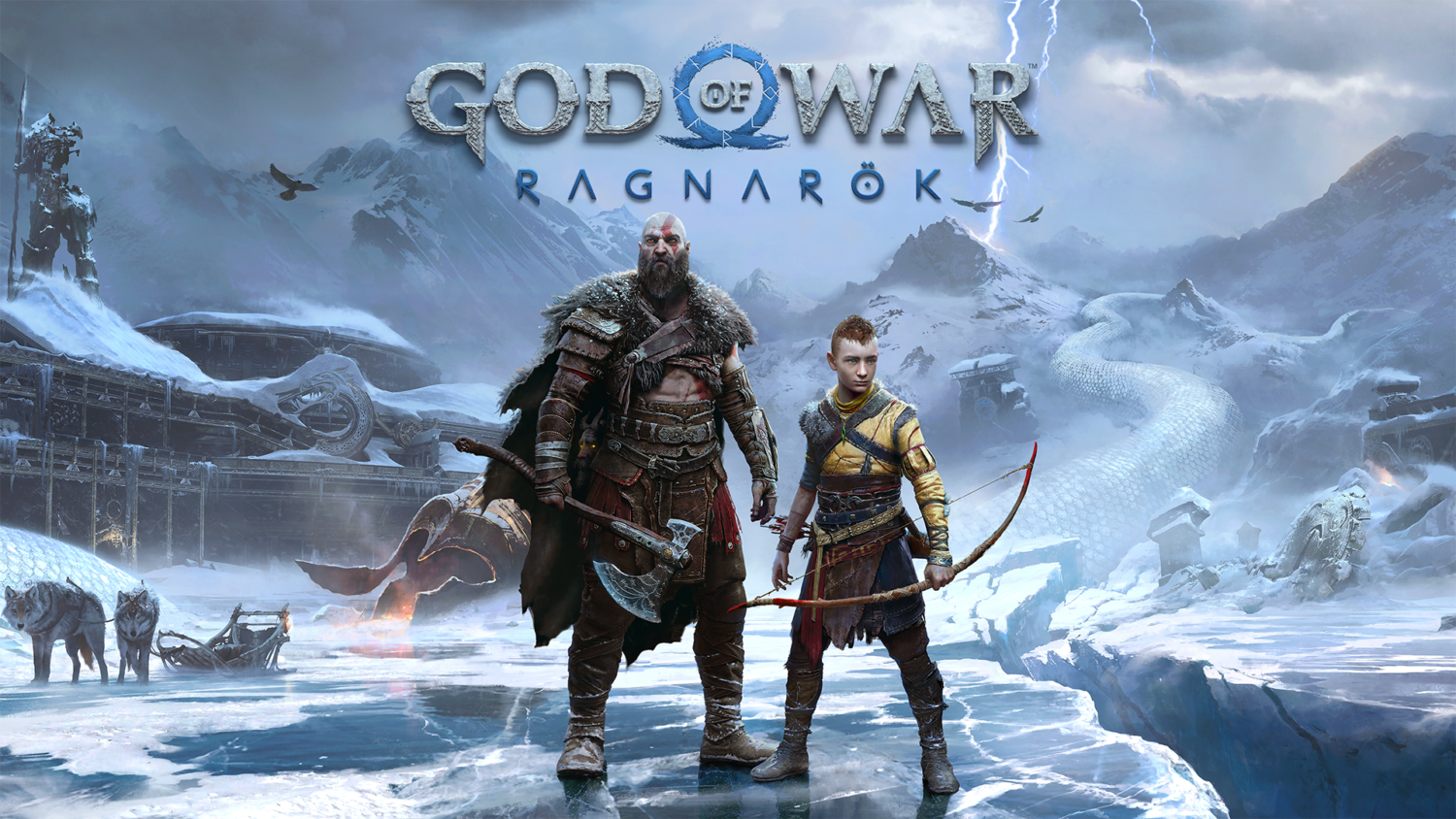 Four years have passed since we got a fading glimpse of Mjolnir as a shrouded figure stood outside Kratos’ cabin. Excitement has been building as we get to put an end to this Norse-inspired entry to the God of War series. Can the faceoff with Odin make this the biggest and most brutal God of War game so far?

For anyone who is unfamiliar with the Greek saga of God of War games, it would be putting it mildly to say that the Gods of Greece did not treat him well. The uncontrolled rage that resulted in him unknowingly killing his wife and daughter triggered a quest for vengeance that saw him slay all of the Greek gods. Kratos came to Midgard a deeply wounded man.

We see a much different Kratos in God of War Ragnarok. He often seems frightened of the man he once was. Terrified of the things that his uncontrollable rage has resulted in. This anxiety shows in his parenting skills, keeping his emotions concealed, fearful that sharing too much could result in Atreus making similar mistakes. He is frightened of the future that lies before his son.

It is hard to adjust to this as a player. You expect Kratos to be this unstoppable god-killing machine. For a large portion of the game, he strongly resists what he knows is his inevitable fate. The absence of over-the-top aggression is replaced by some deeply insightful conversations between other characters where we begin to see that Kratos is a lot more than a weapon. His journey has filled him with wisdom and you will find yourself admiring him in ways you may not have expected to.

Kratos may be fighting the demons inside, but he hasn’t quite joined the brotherhood of peaceful monks. Beheading enemies is part of the daily grind for him but there is a huge disparity between how strong Kratos is vs how strong he is when you are controlling him in combat. It’s so absurd to see Kratos lift an entire tree trunk with ease, then during combat, pummel a bog-standard, poorly armoured bandit 15-20 times with a magical elemental ice axe to kill it.

Hitting an enemy that has an ice debuff with a fire weapon will cause additional damage, you are incentivised to switch between the axe and blades in combat but the process of switching is very slow and often unresponsive. Sometimes you may think you pressed the wrong button so you press the other and you end up fumbling around and getting killed. The process is clunky with an annoying issue that sometimes requires you to recall your thrown axe before you can use your blades. More wasted time-fighting with the controls instead of fighting the enemies.

The fundamental flaw here is the inability to interrupt your own attacks. If you are in the middle of an attack, dodging an incoming attack is not always possible. Your heavy attacks rarely interrupt enemy attacks but they always interrupt you. Taking damage is often the only way to break out of an attack animation. It just feels so sluggish and unresponsive at times.

It is frustrating when your brain has time to identify the incoming attack and how to avoid it but Kratos still hasn’t finished the animation of his current attack yet. You just have to watch yourself get hit quite often. It is annoying as hell during tough battles when bosses excessively spam attacks that you can’t block or parry. Dodging is the most critical part of combat in this game and it is the most flawed mechanic. You don’t even get damage invincibility when you trigger a heavy attack which often has a long, dramatic animation. You just had to sit there and watch yourself lose health since the attacks don’t even cause bosses to flinch.

Kratos clearly still has god-like strength, but don’t expect to see any of this when you are in combat. It feels very unsatisfying when weak enemies take a considerable beating and do not die. Sure, you could lower the difficulty but you want to feel like a god while also being challenged. From a game development standpoint, you can’t always have god-like strength, the game would be a cakewalk. You also can’t give every single enemy god-killing strength but a battle of Kratos and Atreus against 3 or 4 bandits with leather armour shouldn’t be a challenge. For the first half of the game, Kratos just feels way too weak where every encounter, no matter how puny the opponent, is an encounter against an unexpectedly formidable foe.

Another aspect of the combat that is waning compared to past games is the over-the-top brutality. Perhaps this is a consequence of Kratos trying to tame his inner beast but when it is a matter of life and death, it would be nice to see this inner beast unleashed. Nothing in this game comes close to ripping Helio’s head off with your bare hands or tearing out a cyclops’ eye. The spine-tingling finishers are gone. There are some pretty brutal finishers that can be triggered by pressing R3 but overall there is a considerable decrease in the creatively violent ways in which you finish off enemies, bosses in particular.

There is no denying that it is disappointing to see Kratos trying to change his ways, violence was one of the biggest selling points of the series. The narrative does an incredible amount of work to tip the balance. You will often find yourself taking an extended boat ride just to hear what Kratos has to say in response to random chit-chat that Mimir or another character triggers.

Kratos’ life experiences have provided him with so much wisdom that he is reluctant to impart it to others without just cause. Significant pieces always seem to be dropped just at the right time to sway decisions or de-escalate situations. It often feels like a lesson in diplomacy to see a man who has never known anything other than violence attempt to try to solve problems with words.

The God of War series has never been fond of the idea of infallible gods. Ragnarok in particular strips a lot of the glitz and glamour that we often associate with Asgard and its gods and delivers a more humble portrayal of it. This is another aspect that may initially disappoint but it definitely grows on you. Norse mythology is a popular foundation for movies and games. We have more than enough grandiose architecture and gaudy decor to feast our eyes on. Seeing the gods portrayed in a way that is likely what the ancient Nordic cultures imagined is very refreshing and enjoyable once you re-tune your expectations.

The depictions of the nine realms are crafted with so much care and attention. There are times when the game is absolutely stunning. Much like Horizon: Forbidden West, you will be hard-pressed to find graphical flaws. With that being said, it often seems as though God of War Ragnarok is a PS4 game that has been optimised for PS5. This is sometimes quite disappointing when a beautiful view is obscured by a permanent haze. It doesn’t mean the game is ugly, it just doesn’t have the next-gen pow you will be expecting.

Walking along the branches of Yggdrasil as you travel between realms is a brilliantly creative way to disguise a load screen on PS4. Spending 20-30 seconds waiting for the doorway to load because some dialogue was added to the scene is detrimental to the experience on PS5. Pathways often have pointless logs and rocks blocking the way that serves as a handy buffer to avoid a load screen with the PS4s slow HDD. This is nothing but wasted time on PS5. It has you wondering what sort of limits had to be placed on some of the larger scenes to ensure the game runs well on a nine year old console.

God of War Ragnarok provides you with a well-rounded balance of gameplay. Clever puzzles are expertly woven into the quests to prevent combat from becoming jading. With a twenty-plus hour main campaign and another 20+ hours of substantial side quests, you are going to get every penny’s worth with this title. It may take some getting used to but over time, this will definitely stand out as being one of the most substantial games of the series. It is an incredible game but it is not perfect.

9/10
God of War Ragnarock paints a more authentic vision of Norse mythology that really sets it apart from the more glamorous portrayals we are familiar with. The subtle ways Kratos tries to "be better" combine to form an enlightening evolution of a man that was once nothing more than an instrument of war. Unfortunately, the combat is not nearly as flawless as the story with aspects such as dodging and switching weapons lacking responsiveness. This is not the next-gen experience you might be waiting for but it doesn't stop it from being one of the most impressive games in the series and a satisfying conclusion to the Norse saga.
Pros
Cons