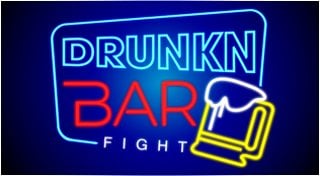 It only takes a quick view of this trailer to make you decide whether you want this game or not. Drunkn bar fight is exactly what you would expect it to be. If you are even reading this review, then you are more than likely going to like it. Drunkn bar fight is nonsensical madness from the moment you step food in the bar.

The game is as simple as it gets. Pop on your VR headset, walk into a bar and start punching the shit out of everyone inside. There are no rules. Throw darts, chairs, bottles. Anything you pick up is legal. Defeat everyone in the bar by any means necessary and you win.

What do you win for these fights? GLORY!

To be real for a moment, the game is pretty crazy. Using your fists, you must beat up all the people in the bar before they beat you up. It is very simple to get to grips with and it is very hard to lose a fight.

The production values are quite low. The visuals are very poor but you can’t expect much from a game like this. Your arms often get stuck on things too which gets annoying. You will often pick up a chair or something and find your in game arm starts freaking out and start glitching through the bar and stuff. It doesn’t cause you to lose since the game is so easy, but it is a little annoying at times.

Movement in VR is always a hard thing to get right. Motion sickness is the bane of VR for some and this game will definitely make you feel a bit sick. There is no teleporting, you must move around by looking at a location and pressing a button to walk forward. This feeling of movement will turn your stomach if you are someone who has trouble with motion sickness.

There are three bars for you to choose from. None of they have anything unique about them that impacts gameplay, just a different scene. None of them are all that impressive visually either. A city bar, a cowboy bar and a fancy rooftop bar. All contain the same kinds of people, just different outfits. None of the enemies have advanced fighting styles or anything to shake it up like that.

This game is pretty crazy and is lots of fun, but it burns the candle at both ends. After a few fights in each bar, you will begin to get sick of it. Once you have punched the shit out of a bar of three men, adding two more doesn’t bring much to the table. Especially considering they don’t all jump at you at once.

You will have some fun but don’t expect it to last long. The game is cheap and still doesn’t give you a bang for your buck.

6/10
Entering into a bar and beating the crap out of everyone is a lot of fun, but it quickly gets boring. There is little more to do than just punch people and hit them with things. Without structured gameplay elements to encourage the fighting, there is little to make you want to play more when you have beaten your way through a bunch of people in each of the bars.
Pros
Cons