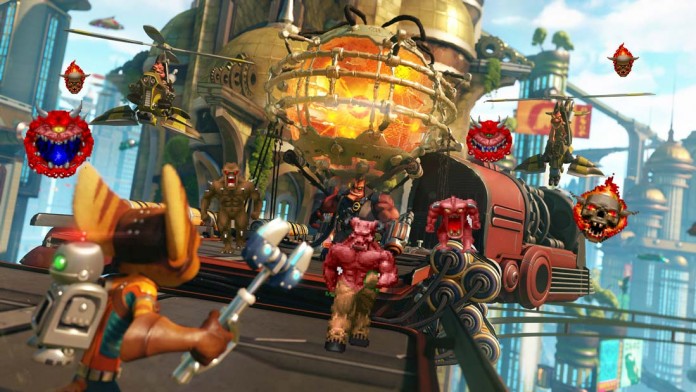 Doom has gone down an unusual road over the past few years. While the latest iteration of the game, looks to me like it will be great, there is still a massive amount of criticism against it. Doom is a very difficult game to make in a modern day. Game standards have risen considerably over the past few years, and nostalgia has been a curse to any developer attempting to recreate a classic game in a modern day. We always remember games being better than they were and will hold a special fondness to the classics that makes them impossible to ever be replaced. Many developers have tried to get classic remakes right, but failed miserably. There are lot of developers out there who could be lined up to create a game like Doom. One such developer would most definitely be Insomniac Games. What if Insomniac Games made a Doom game?

There are 2 key aspects that make a Doom game what it is. Monsters/Demons and kick ass weapons. The BFG is one of the most famous kick ass game guns of all time. In a modern day, Insomniac have well earned their reputation for making insane weapons. They definitely tick the box for being able to create kick ass weapons for a Doom game. The next box is for the monsters and demons. Something that is much more difficult to make work. Especially considering most developers would assume a zombie style of enemy is acceptable to use in this category. There was a time when Insomniac would have been criticized for making colorful happy games and could no way make a game that contains a dark tone, but the Resistance trilogy proved this theory wrong.

Resistance: Fall of Man, was a massive departure from the colorful, happy tones from their past games. The dark tone and gritty post apocalyptic environments was enough to prove that insomniac could make more than childish games. The hybrid creatures in Resistance weren’t quite demons, but they weren’t far off it. I would have no doubt that Insomniac could recreate the demons needed for a Doom game and take the tone for Resistance and make it a hell of a lot more evil!

Insomniac are an independent studio which does leave them with limited resources to handle a project such as this. The studio has a lot of original ideas, I’m sure this is not something that will interest them, but you never know. Maybe some day we will see this happen!