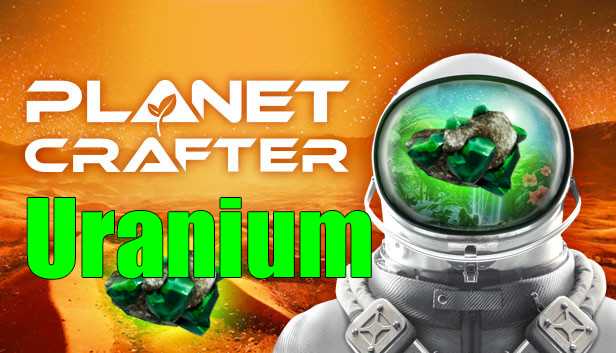 Early on in the game, you are likely going to have a decent stash of uranium sitting around that you picked up in chests. Over time, the need for uranium rods for creating power is going to use them up very fast to the point where you have no more left to build additional nuclear reactors, resulting in you having to resort to solar panels. Wouldn’t it be great if you could farm an infinite supply of uranium? Well, it is possible!

Like most of the rare resources in the game, mysterious caves are often a source. Things like Osmium, Aluminium, Iridium, and Uranium can all be found in caves. Finding the cave is the big problem and once you find it, how do you build up an unlimited supply of it?

In order to access the Uranium cave, you will need to have reached a certain heat level in the terraforming process as there will be solid ice blocking the entrance. Once the heat goes up, the ice will melt giving you access to the cave. The video guide below will show you where you need to go to find the first uranium cave and how to use this cave to farm an infinite supply of Uranium.

How To Find More Uranium

Using the video guide below, head to the location set on the map. The coordinates of this cave are 586:35:-669. When you get here, you will find a reasonably high amount of uranium scattered around the cave.

Ice Is Blocking The Cave Entrance

If you are visiting this cave early in the game, you will discover that the entrance is blocked with a large lump of ice. If this is the case for you, then you are going to have to wait until you have heated up the planet a little more. When you aim at the ice, it will tell you the heat that is needed to melt the ice in the first place. Once the ice has melted, you will be able to get into the cave and harvest the uranium inside.

There is no way to break the ice manually, you must wait, unfortunately. For now, the best thing to do is to build a little hut outside to replenish oxygen.

Farming An Infinite Amount of Uranium

Once you have consumed all of the uranium that is around the cave, you are going to be looking for more. This is where the ore extracting drill comes into the picture. The catch for some may be having access to the blueprint to construct it. It is one of the later structures that you can unlock.

You will need lots of spare power along with some rarer resources in order to construct a tier 2 drill. You will not be able to harvest uranium using a standard, tier 1 drill. It can only be harvested using a tier 2 drill.

For more on finding uranium in Planet crafter and using it to create lots of power using nuclear reactors, check out the video below.

What Is Uranium Used For In Planet Crafter?

When you first begin exploring the world in Planet Crafter, you are likely to come across several blue trunks inside the ruins of space ships and other vehicles. You may guess from its use in the real world that uranium is used as a power source but is that the case in this game and if so, how do you make use of it?

Early on, the only sources of power will be wind and solar. Neither of which needs uranium. As you progress further, you will eventually unlock a nuclear reactor and later, a tier 2 nuclear reactor which is hands down better than any of the renewable sources of power in the game. Although you may have collected quite a bit of it by now, it will quickly run out when the smaller generator requires 9 pieces of uranium and the large needs 27. How do you find more?

There is a type of rocket that will cause uranium asteroids to fall down on the planet which works as a handy source of uranium but also a useful way for you to boost the terraforming speed.

The faster approach is to farm it. The video guide and the pictures and guide will show you the best way to quickly farm a large amount of this resource to work toward an easy and infinite source of power in Planet Crafter.