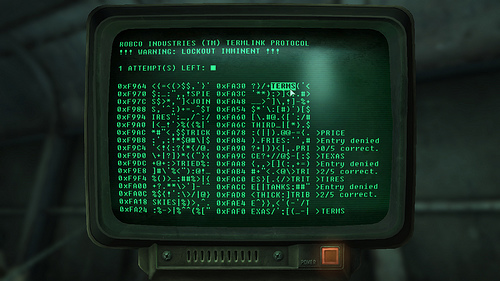 Hacking terminals used to confuse the hell out of me. I gave up all hope of figuring it out and instead id just randomly pick 3 words and quit out then repeat until I got it. Eventually, this got too annoying so I spent some time figuring it out. Turns out its a hell of a lot easier to do when you know all of the tips and tricks to hacking terminals in Fallout. This applies to Fallout 4 and past games as the hacking system has remained the same.

This means 1 letter from the word CAT is correct. It could be any of the 3. What we do know is that is if T is the correct word it will always be in the 3rd position of the word. Even if the correct word has a C or an A in it, they are not in the correct position so they do not get a point for likeness. So with the assumption that T is the correct letter in the word CAT, it doesn’t make sense to try a word like TOE. T is a correct letter, but it’s not in the same position as it was in CAT. This narrows down the words a lot.

Another thing to be aware of is when you get a likeness of 0. This used to annoy me, but now I find it very useful. Say you pick the word CAR and it returns 0. This means the correct word does not have any of these letters in this position. It doesn’t mean the word doesn’t have these letters at all but means they aren’t in these positions. A word like ARC could be correct because the letters are in different positions even though they are the same letters. So make use of a 0 likeness to narrow down your search while hacking terminals.

The Power Of Brackets

So you will have noticed there is a lot of junk characters lying around the screen while you are hacking. Well, not all of these are junk, they can actually provide you with a lot of help. Keep an eye out for pairs of brackets. If you click on these you will get an extra hacking guess or one of the incorrect words will be removed from the screen. If you spot something like this {@#;;.!4}, click on it. This is an opening bracket and a matching closing brackets (they must match). The screen will highlight the section of the brackets match and if they don’t you don’t lose a try by clicking on them. If you clear all of these brackets first, a lot of the incorrect words will be removed and you might even get the correct word on a hard terminal on your first guess.

Another great use of brackets is to reset your hacking tries. If you only have 1 try left, it can get reset back to 4 if you use one of the brackets.

This is about all there is to hacking terminals in Fallout. It’s not nearly as complicated as it first seems and once you know the simple yet powerful tips, you will never fail a terminal hack again.