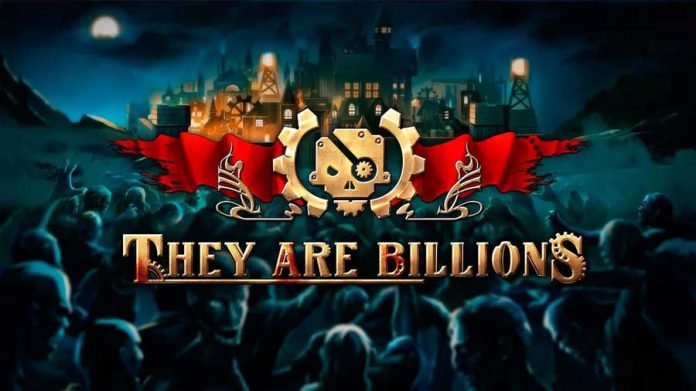 Since the peak of the Age of Empires/Dawn of War era, the RTS genre has been in steady decline. While AOE2 has seen a sudden surge in popularity, modern games still struggle to make much of an impression. They Are Billions takes a new twist on the RTS genre and the outcome is an incredible game that has brought new life to a stale genre.

The concept of They Are Billions is quite simple, so simple that It’s crazy this hasn’t been done successfully in the past by some of the bigger franchises. Rather than start a game with the enemy in an unknown location on the map, the game starts with no central enemy on the map. Weird right?! Your only enemy is time. A zombie horde is incoming and you have a set number of days to prepare for it.

The number of days and the amount of zombies in the horde depend on the difficulty settings you chose. The game is harder if you set the horde to come in 80 days instead of 120 as you have less time to prepare. A larger horde will also increase difficulty as you will have to build a much stronger defense to hold them off.

Every few days a smaller horde of zombies will attack your colony from a random direction. These hordes are rarely threatening enough to overtake the base if you are prepared. The whole point of them is to catch you unprepared. It keeps you on your toes and forces you to take things very slow and tactical as you build up your colony.

The zombies in this game do not behave like the average enemy would in an RTS game. Their goal is to infect the people in your colony and destroy your main HQ building. Once as colonist is infected, they become an enemy. A bit like those damn priests in Age of Empires 2 that would convert units in an army to turn against the player.

The zombies are pretty brain-dead, what you might expect from a zombie really. They take the shortest path to the central HQ of your base. It doesn’t matter if that path is filled with traps and soldiers, they take the shortest path and use no fancy tactics to get there. This might make it seem like a walk in the park but it isn’t. Firstly, the size of the horde can quickly overwhelm the best of defenses. The second reason is there are some advanced zombies.

On the lower difficulties, it is unlikely you will come across any of the advanced units like the Spitters and Harpies. Spitters have ranged attacks that allow them to attack units behind the safety of your walls. Harpies are incredibly fast runners that have the ability to hop over walls. The best defense in the world will not stop them. If they get over your wall and infect a single house, the 20 zombies that come from this house will quickly infect a dozen more houses before your entire settlement is infected and destroyed.

What is most impressive and at times frustrating is how quickly you can go from feeling “unstoppable” to a game over screen. A single, basic, slow walking zombie is all it takes to end the game for you. The rate at which they spread the infection when they get inside the walls of your colony is incredibly high. By the time you spot one has made it into your settlement, at least one building will already be infected. Damage control is tough if you have not prepared for the scenario.

The tools at your disposal to defend your base are fairly predictable. Start by building some walls and fortify them with some guard towers. Place some snipers in there to pick off the stranglers. Then you can construct some towers (Ballista tower, Tesla tower, Machine gun towers). All of these automated towers can be built to help destroy the horde.

All of these defensive buildings come at a cost. Your colonists generate gold automatically, likely through oppressive levels of income tax. To increase your colonists, you need food to make sure they are fed. Electricity is needed to power the buildings. Stone, wood, iron and oil are also used as construction materials.

You harvest all of the natural resources in ways that you might expect. What is quite unique in this game is that the sources of natural resources do not deplete. A sawmill can continue to harvest wood from a forest indefinitely without the trees ever vanishing. It is a little unusual but it helps you keep a better handle on your resource income.

It will take a few failed games before you learn the differences between They are Billions and the standard RTS you will more than likely be used to. Common sense will get you through some of it but a lot of it is going to be trial and error. You will make one monumental mistake that costs you the game and this will teach you not to do it in the future. You could also check out a game guide to speed the process up. The point is that extensive RTS experience isn’t going to make you an expert in this game right away. There is a learning curve and once you get over the initial shock of the game ending in an instant you will be hooked.

They are Billions does not appear to put a cap on the size of your colony. There may still be one, but it is unlikely you will hit it unless you are making it your mission to build an oversized colony.

With any game that allows unrestricted building like this, you are going to run into some performance issues. When your colony starts to get very big, there will be some frame rate issues, screen tearing and even some game crashes. There are a LOT of colonists just walking around the place. They make the colony feel populated, but they always get stuck at the gates. The end result is gates filled with 100s of colonists stuck. Reducing colonists on screen would surely help the games performance and remove this ugly occurrence.

Surviving the zombie horde is all about making the most of the limited time you have. Something that is quite unique is the ability to freeze time. When time is frozen, you can still issue commands that influence gameplay. The commands will not be put into action until you un-pause the game, but this is still insanely valuable. It allows you to perform some time consuming manual tasks like moving units around, upgrading buildings and constructing new buildings. All of this can be done without wasting a second of in game time. As soon as you unpause the buildings construction will start. This helps you get over the time wasting caused by only being able to do one thing at a time. You can now do several things at once as far as game time is concerned.

Visually, They are Billions doesn’t stand out as being anything special. The art style is clean and effective. There’s certainly potential for them to make some expansions that add some cyberpunk skins and stuff. The coat of paint isn’t what anyone should be playing this for. The fun is entirely in building up your defense to survive that zombie horde. Never has your potential death been so exciting!

9/10
A very unique twist on a long running genre has brought some life back into the RTS scene. Building a settlement that is capable of holding off a seemingly endless zombie horde is a very exciting prospect and it has been executed incredibly well with this game. The speed at which you can lose the game will have you on edge and constantly in fear of the zombies. If you loved the classic RTS games and want a game you can sink some hours into, They are Billions is for you.
Pros
Cons