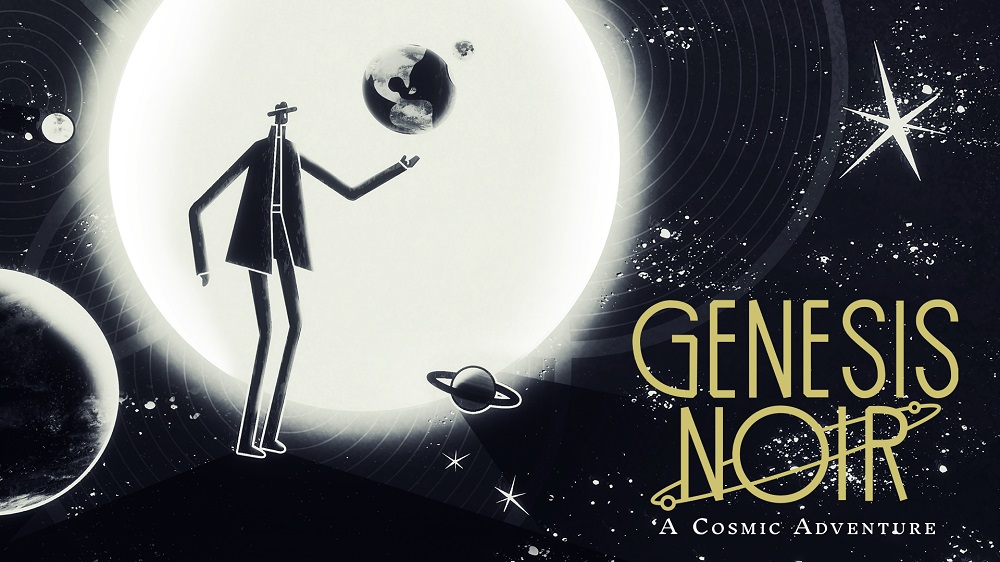 Great visuals alone do not make a great game but every now and then a game will take its visual style in such an unusual direction that you can’t help but like a game simply because of the way it looks. Genesis Noir is one of those games that will catch you from the start with its visual style and throughout the experience, your eyes will have the pleasure of an ‘out of this world’ experience.

From the very start, you will be treated to some smooth jazz with saxophone filled melodies ringing around the dark and moody, 1920s themed city. The artistic style is minimal but makes great use of the contrast between the light and dark elements of a scene to create a standout, black and white experience.

Sound plays a significant role in enhancing scenes. On top of the calming, jazz-inspired soundtrack, many elements of the world that you interact with will create chimes and notes that complement the underlying musical score.

It is pretty difficult to explain the story, not because it has spoilers or anything, simply due to the fact that it is hard to know what the hell is going on half the time. One moment you are in a bar, the next minute you are in space. It revolves around having to save someone from being shot but it is by no means a story you will remember, you will remember the journey you take to get to the end, however.

The puzzles are quite cleverly crafted in providing a bit of a challenge to the journey while also providing some meaningful consequence for solving it. Dropping seeds in the soil at certain locations to build a path forward is also the process of planting the seeds of the universe.

The puzzles, while meaningful and satisfying, other gameplay elements and mini puzzles are rather annoying and confusing. There are times where you are being presented with a scene and are given no instructions on what you are supposed to do to progress. Move the cursor around and find you have to pop a few bubbles or make some DIY life forms breed.

There is nothing wrong with this when you are stuck in some room in a standard puzzle game but when you are floating around in space and nothing makes sense, it takes away from the reward when you realise that you had to hover the cursor over some planets to make them explode or simply pop a few bubbles to proceed. The solution does not give you the same sense of reward for being “smart enough” to figure it out when the solution doesn’t make much sense.

A few times the game gives you such an easy puzzle but with such little context that you will solve it without knowing what you did to solve it. Good in some ways that you aren’t bogged down by a confusing puzzle but also rather redundant from the game’s perspective that you are able to complete a challenge without knowing what you did. Some times it feels like those toys for infants where you spin things, push bits and slide stuff for no reward at all.

Genesis Noir is definitely not going to be a game for everyone. From an objective standpoint, there is no denying the artistic style alone makes this game stand out. It is a rather short experience and considering how different it is from other artistic driven games, it is well worth checking out to see what it is all about.

7.5/10
Genesis Noir will take you on a unique adventure from the dawn of time. The art style, music and the nice blend of how the world influences the music at times do a lot to enhance the scenes. The unorthodox approach to puzzles and challenges work well for a while but over time it starts to feel a little pointless and irrelevant. Sometimes they make no sense and the solution is mashing buttons until it is solved and other times there's just no reward or satisfaction in figuring out the solution. The adventure is rather short and is well worth the journey if you are interested in a more visual experience over a more common adventure.
Pros
Cons