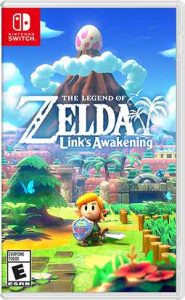 The Legend of Zelda: Link’s Awakening was a game that was originally released for the Game Boy back in 1993. Back then, the franchise was starting to hit a much larger audience but still had not been propelled to its full potential. Something that would later be triggered with the release of the Ocarina of Time for the N64.

Link’s Awakening was given the HD remake treatment when it was completely remade from the ground up on the Nintendo Switch. The game supported clean HD visuals, completely overhauled from the original pixelated black and white visuals that the gameboy was capable of at the time.

One of the more unusual aspects of the game was the lineup of monsters and creatures. The game did support many of the classic Zelda enemies, there were a large number of assets included from the Mario franchise. The giant egg on the mountain being one of the first things you might notice that feels out of place.

Link’s Awakening was met with a lot of positivity but it failed to reach the same level of success that Breath of the Wild reached, not that anyone really expected it to considering it is a much different style of game. Regardless of its success, it is a great sign to see some of the more classic games in the franchise get a revival in this way. For those looking for a good adventure game on the Nintendo Switch, this is a great one to pick up.

"A really enjoyable game that looks great and has very high production values. The inclusion of so many characters from the Mario franchise will raise an eyebrow and have you wondering what the point is. Link’s Awakening doesn’t do anything bad, but it doesn’t have that special something that other titles in the Zelda franchise have. "
Score: 8
Read full review

What are you meant to do with the rooster bones under the weathervane?

Video Games Puzzle
Hop on top of the crystals to move forward??

The owl is giving me a riddle "hop on top of the crystals to move forward". I can't figure out what this means. It isnt making any sense to me.

Video Games Puzzle
To open a treasure chest, use the pots around it?

To open a treasure chest, use the pots around it, what does this riddle mean in the face shrine of the legend of zelda links awakening?

I am stuck inside a room in the face shrine where there are two horse heads and the door below is blocked. How do i get out of here?

Video Games Dungeon
Can't get across gap to get to Face Shrine?

I am stuck trying to get through the tunnel to the face shrine. The gap is too wide and I fall down. How do you get across in Link's Awakening

How do you find the boss key in the catfish's maw temple in the legend of zelda links awakening. I cant get to the last room with an unopened chest. 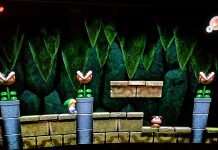 Dan Hastings- October 11, 2019
Whats with all of the enemies and characters from the Super mario franchise showing up in Links awakening? Seems a bit out of place