When I first started playing, the difficulty in Rocksmith was one thing that bugged me . I have been playing the guitar for a few years already. Playing songs I already knew, or simply playing some easier songs got frustrating when 1 note was coming every few seconds. It also gets even more frustrating when the notes are off the beat a bit making it harder to play the song on easy compared to the full song. At first i thought that this was the way the game worked, but its actually possible to increase the starting difficulty in Rocksmith.

From the main game menu go into the settings and then go down to “Difficulty Settings”. This can also be “Play Settings” in some versions of the game. This will let you change all of the following game settings. 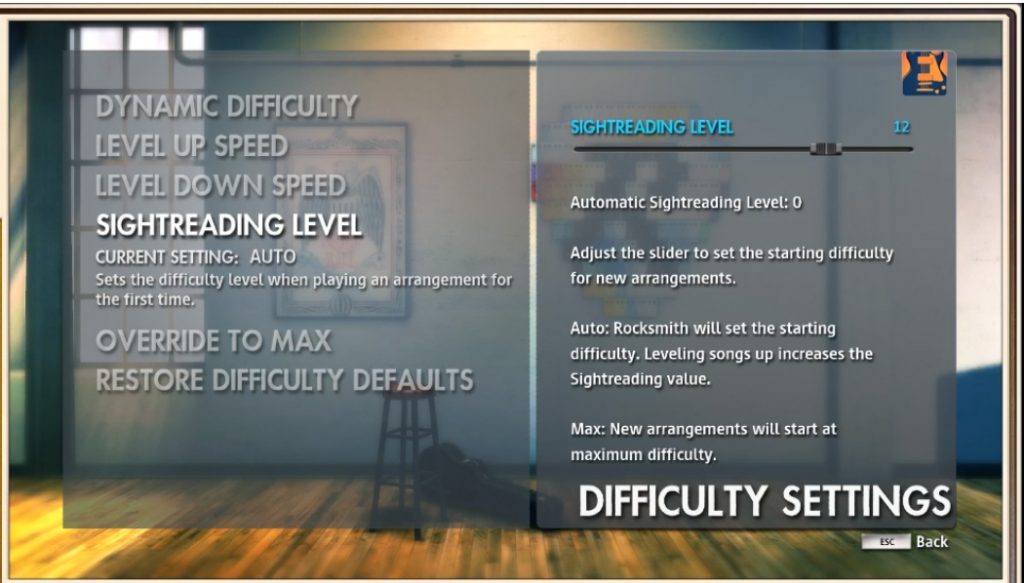 The first thing you can do is increase the start difficulty of a song. This means that when you start a new song you have never played before, it wont be a 1 finger experience where you are looking at your watch waiting for the next note. Increase this value depending on how confident you are of your skills.

By default, you must play a section of a song a certain number of times before the game will consider you good enough in order to play a harder version of this riff. For some easy riffs it gets boring as hell when you are playing hardly any notes. Sometimes you get so bored you miss the next note and make it take even longer before the difficulty will be increased. From the same settings menu you will be able to alter the speed at which the game increases the difficulty for a particular riff.

Another annoying thing that can happen is the game will decide you are not good enough at a riff, just because you screwed up some stage. If you are confident, you can decrease the speed in which the game determines you are “not good enough”. This means if you screw up, the game wont go dropping the difficulty down to beginner levels.