I had this game on my Vita for quite some time before I played it as I didn’t think it was a game I would enjoy (not big into anime and all that). I was very very wrong, Virtues Last Reward was absolutely amazing! The story pulled me instantly and after that I couldn’t stop playing until the game was completed. From start to finish the game provides a story that just gets better and better.

Virtue Last Reward is more of an interactive movie than a traditional game. When it’s broken down the game is about solving 3D puzzles. The thumb stick is used to look around the environment and then using the touch screen you interact with the things that you see. The game is played from a first person perspective. Unlike other games you do not have the ability to freely walk around. Movement between the various areas and rooms is done during cut scenes that will show your characters movements on an overhead map. I found this to be a great way to implement travelling as it speeds things up and prevents the user from getting lost. Thankfully the game gives you some control over where you go and the decisions you make will determine certain outcomes of the games story. If you are hoping for action then this game doesn’t come close to filling your needs. There is absolutely no fighting or typical game play modes, in fact there isn’t a whole lot of game play. Virtues Last Reward is a point and touch puzzle/mystery game.

For a handheld game the visuals look quite nice. There is a reasonable amount of detail in the textures to make the environments look realistic and most importantly it remains consistent. There aren’t any scenes that look better than others and there aren’t may areas where there are muddy textures next to sharp textures. When it comes to the character models the design changes as they differ a lot from the design of the levels. The levels are made to look realistic while the characters look like something out of an Anime show. My guess is that if they had made the characters look realistic it they would have ended up looking muddy and fake due to the hardware limitations of the system. I found the Anime style to be quite nice to look at and it brightened up the game.

The game contains a very deep and slightly complicated story line. For the most part it is quite serious, but is occasionally broken up with some humorous, often kinky moments. While playing you will need to give the game your full concentration or else you wont have any idea what is going on later in the game. This is the kind of story I enjoy and at times I found myself thinking of the TV series Lost, but don’t worry the game doesn’t have a terrible ending like Lost did. As much as I want to talk about the story of this game and how it works I feel I might ruin the game by revealing anything about it. To summarise it safely all I will say is you wake up in an elevator and don’t know how you got there. Eventually you find yourself playing a series of challenges (Playing a game within a game.) against the other characters. If you loose all your points you die! If you get up to nine points you get to leave the game and live happily ever after. Explaining how the challenges work isn’t for me to say in a review as I would hate to spoil anything about the story. All I will say is I absolutely loved everything about it! 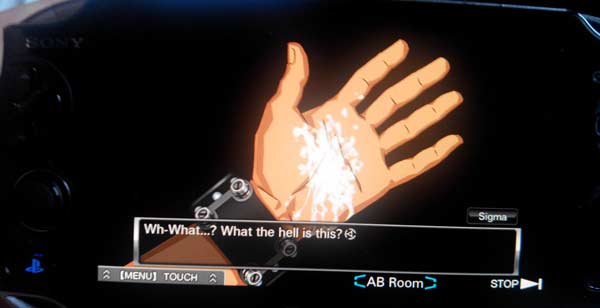 A kinky sense of humor is definitely an accurate description!

I played the European version of the game which only contains Japanese voice acting. This didn’t bother me whatsoever and if anything it actually made me enjoy the experience more. There is something about the language and the voice actors used in this game that really contributed to the atmosphere. I have viewed several videos of the game with the American voice actors speaking English and it didn’t feel as good. Reading large amounts of text in games that do no have voice acting isn’t something that bothers me. Hearing Japanese being spoken made me read the English words in my head using the same voice as the character that was speaking in Japanese. I found this to be incredibly enjoyable because the voices chosen for the characters were great! The audio that often played in the background when certain scenes were happening built up the atmosphere even further. You will really get sucked into playing this game if you enjoy the story.

Virtues Last Reward was perhaps the biggest surprise I have ever had when playing a new game. I played it just to give it a chance before deleting it and ended up playing (in my opinion) one of the best games for the PS Vita. The story might be complex, but if you are able to follow it you will absolutely love it. It’s not very often that I come across a story that catches my attention because it is mysterious and interesting. It’s even more rare to find a story that actually ties up all loose ends and explains the conclusion effectively. I couldn’t have been more satisfied with this game and as much as I tried I really couldn’t say anything bad about it. If you play this game for a good story and nothing more then you are in for a treat! The awesome puzzles and mysteries are the cherry on top and really make you feel like you are part of the story. I have never been interested in games like this before, but after completing this game I now have a new found love and I cant wait to get my hands on more games like this.

9/10
For me this game was a massively unexpected experience that I have a long bus journey to thank. I absolutely loved Virtues Last Reward and I would say that you should not judge this book by it's cover. Virtues Last Reward is an amazing puzzle game that has an incredible story that really sucked me in. I found it hard to put the Vita down as I really wanted to know what was going to happen next.
Pros
Cons