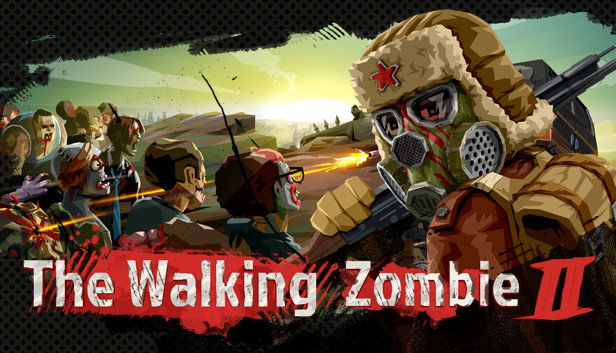 Zombie survival games are a dime a dozen these days, that’s not to say there isn’t potential for something new and fun. When you take Jazzpunk-style visuals and try to make a more light-hearted zombie survival game, there is a recipe for success but can Walking Zombie 2 capture this?

Walking Zombie 2 gets off to a pretty good start. A rather humorous back story to how the main character came to be. At least that is how it first seems. After having played the game a little further, it’s hard to tell whether the opening scene is meant to be funny or not. In fact, the entire game seems to be laughable at times but the game isn’t in on the joke.

Walking Zombie 2 seems to be trying to take itself very seriously but the art style and overall gameplay are very child orientated and silly that it gets a little confusing.

The voice acting is the first thing that started to give it away. It seems to be all AI voices. The tone never seems right for the situation and the intonation can often sound strange. It is most definitely better than no voice acting but when the game is trying to be so serious, it detracts from this goal. If they had gone for humor, they could have made these AI voices a little more out of place and it would have hit the nail on the head.

The main structure of the game is based around a base camp, the first of which is a tiny camp that the game refers to as a city for some unknown reason. You must head out into the zombie-infested wilds to complete objectives for the people in the camp. At first, the quests seem to fit the standard format. Go here and clear out the zombie infestation or I lost something valuable, go get it for me. After an hour or so, you will start to realize that you are doing the same missions over and over, just in different locations. There is absolutely no variety. There isn’t much quest stacking you can do either which results in you returning to the same location to do something you could have done the last time you were there.

To make matters worse, the locations you visit are tiny. Often just a single building with a few trees. It feels like it was designed to be a VR game where the size of the levels is less important.

The small simple levels, basic, repetitive objectives and the happy look and feel of the game makes Walking Zombie 2 feel like a game that was designed for children. Think Rugrats meets zombies. There is very little challenge offered to the player, despite missions coming with a difficulty indicator when even the hardest missions could be completed with your eyes closed.

The biggest challenge is navigating your backpack. It looks like the zombies got to it first and made a right mess. Menus are broken up into weird sections with multiple button clicks required to get places rather than just allowing the user to move the analog stick to the desired location. It appears to be a UI designed for a mouse and next to no effort was put into making it work with a game controller.

If the game is targeting children, then they did an alright job at it but if this is the case, what the hell happened with the backpack UI. Nothing makes sense. It looks like the design was inspired by an old HTML website from the late 90s. Ugly graphics with so much clutter and mess. Even if you were using a mouse to navigate, actually finding what you want is just a mess. Then when you find it, you have to figure out how to actually interact with it.

One thing that is not cluttered however is the microtransaction forms. Plastered in every corner and menu, you will never struggle to find a way to hand over 4.99 to the game developers. Every single RPG mechanic can be sped up with some kind of purchase. Every aspect of this game is pay-to-win and it is not justified. The game just isn’t engaging or challenging enough for you to want to or even need to make additional purchases. Sure, it is a free-to-play game but for a game like this, you will be better off spending 9.99 to get a game that tries to entertain you rather than a game that doesn’t care about anything other than you buying €4.99 booster packs that make the already laughably easy game even game easier

5.5/10
The Walking Zombie 2 almost comes close to being a really fun game. The biggest mistake was to taking itself too seriously. The game is unintentionally funny and often seems like it is a game for children. While there is still some fun to be had with this game, the absolutely horrendous UI design combined with all of the microtransactions make any interaction with the character menu a dreaded chore.
Pros
Cons