The Stick of Truth is the latest game based on the hit TV series South Park. There have been over 5 south park games released in the past, all of which failed to accurately capture the charm of the TV series, that is until now! The Stick of Truth is the first South Park game that has been able to capture everything that we love about the TV show and put it all into a video game that looks and feels like a South Park episode while still being an incredibly enjoyable video game.

At first glance the game is almost indistinguishable from the TV show. The sound, animations, character models, voice acting and level design are made to look just like the TV show. The game uses the same cheap looking textures the TV show uses. The animations when the characters walk and talk are also just like the TV show. Rather than go for a 3D world like past games have, The Stick of Truth is a 2D open world game. The camera angles and 2D style are set to mimic the style used on the TV show. The game captures the TV show so well that it’s hard to believe that you are playing a game. There is almost no difference between gameplay and cut scenes other than the cut scenes looking sharper. Visually there isn’t much more you could want from this game. The console versions struggle a bit with jaggies at times but it isn’t a major problem. 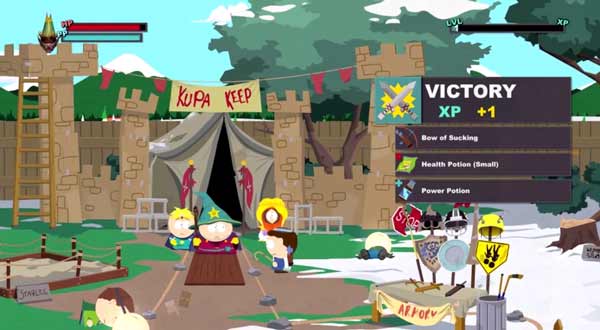 Matt Stone and Trey Parker worked closely with the developers to create this game. They wrote the story and also did all the voice acting. This combined with the visuals completes the South Park experience. The story is rude, inappropriate and absolutely hilarious! Everything you would expect to see in a South Park episode. The story revolves around a fantasy war between two groups of children from the town who are at war in order to gain possession of the Stick of Truth. The progression of the story will bring you to familiar places in South Park and introduce you to all the awesome characters in the town. There are many side quests to complete throughout the game. A lot of these quests are based on episodes from the show such as a quest to find ManBearPig, but they can also be random quests such as find some hidden item.

The Stick of Truth is a turn based RPG. You create a character who becomes the new kid in South Park. You then join up with the other kids of the town and begin your quest! As you defeat enemies your character will level up giving you access to new powers and abilities. Leveling up will also allow you to equip more powerful weapons and armor. Weapons and armor can be obtained from looting dead enemies or from chests/containers placed around the levels. New equipment will often grant bonuses to certain abilities such as increased health along with offering greater armor or attack power. A turn based system is used for the combat. This is similar to the combat systems used in the pokemon or final fantasy games where the player takes a turn to attack then the enemy takes a turn until someone wins. During combat you will have access to two characters simultaneously. You get to attack with both of these characters before it’s the enemies turn. You can call a new character into battle to replace the secondary character if you are fighting a tough battle, but this counts as a turn. Overall the combat system is solid and works well, although it will take a bit of time to get the hang of defending and countering enemy attacks. 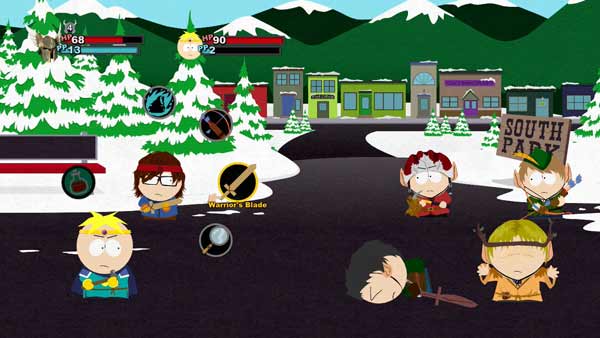 8/10
The decisions on whether to buy this game is based on one thing. Do you like the TV show? If you love South Park then you Will love this game. The game has everything that people love about the TV show and doesn’t deviate from the shows successful formula at all. If you hate the TV show then you will hate this game, it’s as simple as that! It takes about 15 hours to complete the main quest and there are plenty of side quests that give you additional play time. This might be short when compared to other RPGs, but I don’t think they could have done a better job. The writers threw everything they had at this game and the resulting product is one of the funniest games I have ever played and one of the funniest south park stories too. The Stick of Truth is a must have for all south park fans!
Pros
Cons