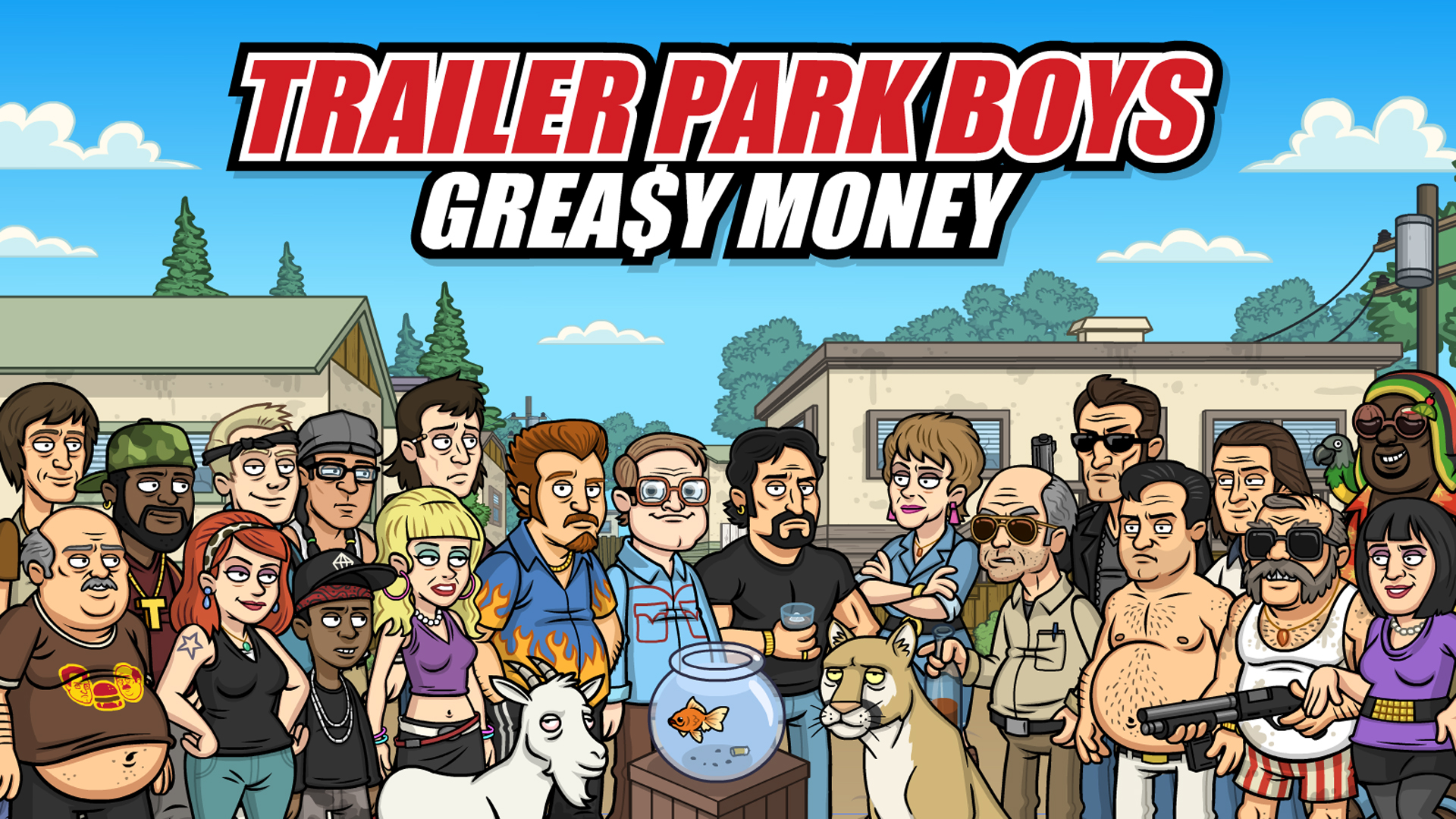 Trailer Park Boys: Greasy Money is an addictive way to waste some time. Mindless tapping to build those businesses up to achieve what? Who knows, but we all keep doing it anyway! While the game is not particularly complicated, there are some things to know about it to improve the speed at which you generate money. This Greasy Money game guide will give you loads of useful tips to quickly progress through the seasons.

How Many Seasons Are There?

There are lots of seasons in this game. An incredible amount in fact. After playing for a few weeks, you might only be on season 15. The seasons go all the way up to the 100s. At the time of writing this Trailer Park Boys: Greasy Money guide, there are a grand total of 240 seasons for you to work your way through.

The initial goal for greasy money is to gather as much money as possible. Level up characters and buildings to level up as quickly as possible. What you will soon learn is that levels of characters and buildings do little to help you progress in the seasons. The only way to complete a season is to complete the goals that are listed at the top of the screen.

A lot of these goals are often linked to gathering money, levelling up characters or buildings or simply automating a building. So while the buildings are not how you progress, the timing at which you upgrade them and collect money is going to be a critical part of completing the seasons as quickly as possible in this game.

Avoid Upgrading Unless there Is a Goal

There are goals that are often listed for upgrading specific characters/buildings or to upgrade X number of characters or buildings. Since the alcohol required to perform these upgrades is in limited supply, you should avoid upgrading anything when there is no goal for it.

If you decide to upgrade randomly, you could find yourself in a difficult spot where the only goals listed on top of the screen are ones that require you to perform upgrades. IF you are all out of alcohol, you could be waiting sometime before you get to perform the required updates to clear these goals and progress to the next season.

When you automate buildings in Trailer Park Boys: Greasy Money, you will be able to earn money while you are away from the game. You may have noticed that some times when you log in, there will be an option to watch an ad that will give you x2 dollars for the money earned while you were away from the game. If you log in every 10 minutes to collect your cash, you will be unable to take advantage of this double bonus.

For some of the ads, it is actually possible to press the back button on your phone. If you click the option to return to the game, you will skip the ad and still get the bonus. An infinite loading screen will appear when you do this. Press the back button once more to clear it and collect your double bonus without needing to watch the ad.

Let’s say you need the money and want to upgrade the second-hand gas building. Rather than just upgrade the character to the highest level, check the multipliers first. An upgrade from x2 – x8 is better than x12’000 – x24’000. It seems confusing at first but if you are already on a multiplier of 12’000, moving up to 24’000 is just doubling the total. So a building earning 1D will only jump up to 2D. On the other side going from x2 to x8 is an increase of 4. 1D will move up to 4D.

The lower the character level, the cheaper the upgrade. So if the upgrade is cheaper and gives a better increase, it is best to look around at all the available upgrades before you do. You can use a calculator to help you if you struggle with the numbers. New Multiplier (divided by) old multiplier. 24000/12000 = 2 and then 8/2 = 4. This is why the smaller numbers actually make you more money.

Keep An Eye Out For The Film Crew

The film crew do not appear at regular intervals. Sometimes they could appear after 5 minutes and other times it can take 15. All you need to know is that you should keep an eye out for them. Watch the ad for an easy 15 units of alcohol. This amount is often 30 or more during events so you should keep on top of these guys, especially if there is an upgrade you are very close to getting.

In most levels, the second-hand gas building is going to be your first structure when starting a new season. You will quickly outgrow it and decide it isn’t worth investing in since other buildings earn considerably more. Never overlook it, and more so with events. These early level buildings start off small but with enough upgrades, they can pull in considerably more money and at 10 times the speed of buildings that are much higher up the road.

Currency like hash coins is an unfortunate side effect of these free games. They can be used to purchase trunks and other items that will speed up things for you. Never spend these in the main game. The only time you should be spending these is when you are doing the events. Spending 50 coins to speed up the level so that you can unlock 100 hash coins along with a collection of other great items is more than worth it and is a much better use of your time. The rewards for these events can often be better than what you buy with hash coins in the main game anyway. Bottom line, only spend these coins when you are going to get something good in return. Never spend them to save time.

If you are trying your best to enjoy this game without needing to spend a single penny, you may not spend much time in the store. Every few hours, usually on the same schedule as Lahey’s trunk becoming available, you will see a set of three cards at the top of the store. You can spend liquor to purchase some of these cards. Most of the time, it is not worth spending money on them, but if you have a particularly high earning building and are only a few cards away from an upgrade, check this section of the store out. The few glasses of liquor will give you the much-needed upgrade to skyrocket your earnings. This guide will give you some extra help getting liquor in Trailer Park Boys: Greasy Money.