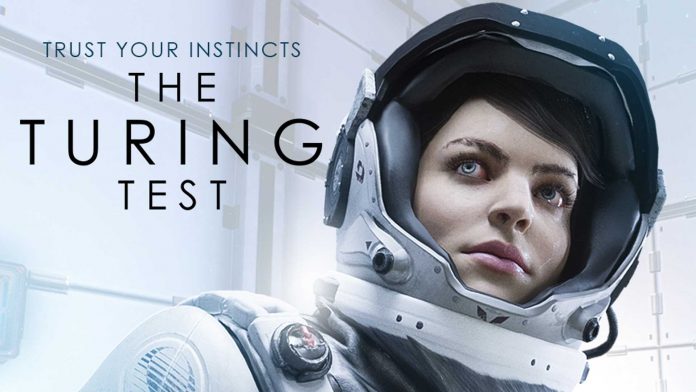 You have landed on Europa and are part of a rescue mission to help save the stranded workers who are stuck in a mining facility. At first, all seems quite normal until you become aquanted with the artificial intelligence, TOM, that is looking after the computer systems of this facility. There is a lot more going on in this facility than it seems and it is up to you to figure everything out and rescue the team.

As far as stories go for low budget games, The Turing Test has a really interesting one. I will say that this type of story is definitely not for everyone, but for those who like Sci-Fi and technology, you will find a lot about this games story to enjoy. You are in a high tech mining facility that is controlled by a sophisticated AI called TOM. He seems cool and would appear that he has everything under control, but after spending some time talking with him, you realise that something isn’t quite right here and that there is a lot more going on here than you were originally told. You are told that the puzzle rooms have been put in place to prevent a robot from being able to gain access, only a human could solve the puzzles. This is where the whole Turing Test thing comes about. As you are solving puzzles, there will be side elements that play with the moral side of AI and whether the Turing Test is an accurate method of judging whether a personality is human or not. There is a lot of depth to it, but it can be quite tech heavy at times. You will need to stay tuned in to know what is going on.

Having been blown away by some of the amazing puzzles in Talos Principle, my expectations were quite high. The gameplay is almost the exact same, but with a little less depth. There are not as many mechanics at your disposal to solve the puzzles with, but it is also a much smaller game. The first 20 or so puzzles were pretty easy to solve. The remaining puzzles were a little more tricky, but I’d say I got properly stuck around 3 or 4 times, so not incredibly difficult, but a fun challenge all the same. It would have been nice if there were some additional tools or mechanics that were in place to solve puzzles. There are only so many ways the puzzles can try to trick you while using the same few tools, switches and item that are available in the game. I think they should have cut away some of the more simple rooms. Some were so incredibly simple that I could guess the solution before seeing what items were at my disposal.

While the gameplay and the story are both great on their own, they do not fit together very well. Having to solve various puzzles one after the other, doesn’t make much sense. If there was a mining mission sent to another planet, they would not bring a huge amount of puzzle rooms to deter people from gaining access to facility. I found that the story and the gameplay were so disjointed that the puzzles, while a lot of fun, were just getting in the way of the story. Dialog is triggered at the start of each room, meaning you must solve the puzzle before hearing the next part of the story. There were very few points where the dialog was in any way representative of what was going on in the room I was currently in. When the story gets interesting, you must go off and solve a completely unrelated puzzle in order to hear what comes next.

Visually, The Turing Test is a nice looking game. Clean & fururistic sums up most of it. There is a lot of asset reuse, but the fact that they are on a moon, far away from home, makes this less of a complaint and more of an observation. Before entering each room, there is a loading screen that lasts a couple of seconts. This feels a little long and slows things down a lot. When most of these rooms are quite small, I don’t see why they cant pre load the next level in advance to avoid having to wait for a load screen for a very basic and small room. It felt quite glitchy as the frame rate often drops very low when entering a new room. There is also a very annoying audio bug in the game where the audio balance seems to be out of place. When the character you play as speaks and you move around, it feels like you are spinning around, but the source of your voice moves behind you which makes no sense. It also results in the voice going from being incredibly quiet to incredibly loud. I found this incredibly annoying when I was trying to listen to what was going on, but I had to move to the right position so I could hear my own voice. This happened every time my character spoke, so it is quite an obvious bug.

7/10
The Turing Test has quite a few flaws that hold it back, but for a game that is a low budget, digital only game, it has a huge amount to offer for it's price. Depending on how quick you get through the puzzles, you could get close to 10 hours from this game, which is great value. None of the issues with the game are game breaking. There was a lot of potential for this to be a much better game than it was, but overall, it was still a good game that I enjoyed playing.
Pros
Cons