Imagine you could go back in time and replay events over and over until you get them right? Stories: Path of Destiny requires you to play the game over and over. Each time you obtain key pieces of information based on the decisions you make. If you are thinking that this sounds quite repetitive, you aren’t wrong, that is the point of this kind of storytelling after all. The problem here is the story you keep looping over, is a fairly mediocre children’s story.

Shallow characters, predictable turn of events and a fairly simple overarching story leave very little entertainment for anyone over 10. The forks in the road that you reach may be interesting to children, but any adult will see the options and ask “why can’t I have a more logical option?”. This is a little insulting to any children who appreciate some good storytelling. The point I am trying to make is the story is lacking logic. For a game that is so heavily focused on the story and its many decisions, you would expect the decisions to be far more impactful than they are. A lot of the time, it feels like decisions were just put there because they had to be there. They don’t always work with the flow of the story. It would be possible in a lot of cases to do both options, a decision is not needed.

Let’s say you have one dollar and you go to the store. There are two things you need, both of them cost 40 cents each. The person at the store says you must pick only one of these to buy. Your response might be, “both things cost 80 cents combined and I have one dollar, why can’t I have both?”. This is exactly what is wrong with the decisions in this game. You must make a decision with no reasoning behind why you can’t have both or something else more logical. This game has 40+ endings because you are forced to make so many pointless decisions. Why have one cake when you can chop it up into 40 pieces and have 40 cakes!…wait that’s not how it works… 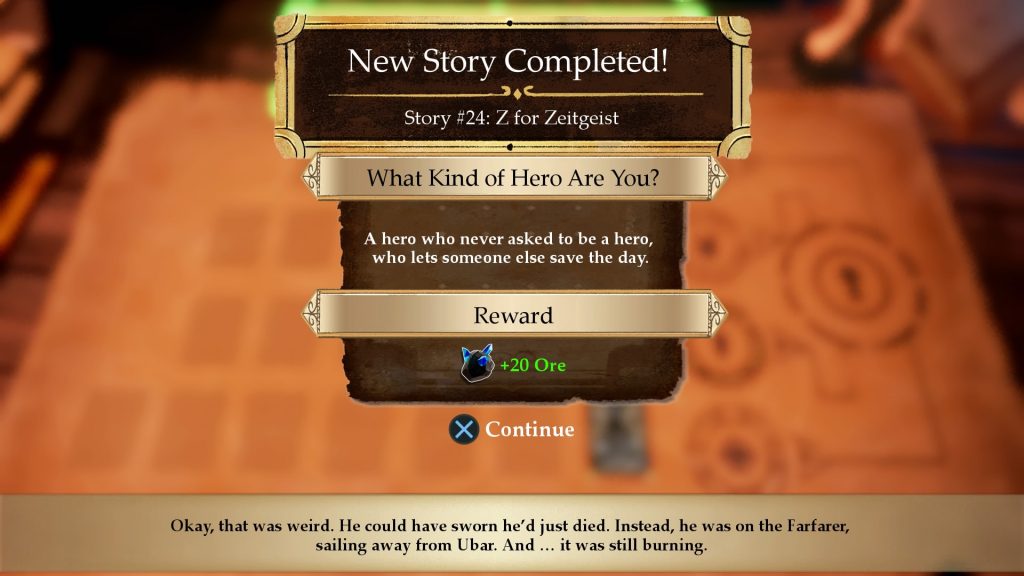 The game starts the same every time. You are faced with a problem and you have two (three after you progress further) options to choose from. The game has some brilliant narration which makes a lot of the storytelling far more enjoyable. Each chapter ends with you needing to make some kind of decision. These will impact the ending, which nearly all end the same. Through trial and error, you must figure out the correct turn of events to reach the true ending.

A playthrough takes about 30-40 minutes, so you won’t be spending a lifetime on this game if you are a completionist. In saying that, when you visit the same level for the 5th time, it does begin to feel like a lifetime. Once you finish a run, you loop back to the start.

The most frustrating part of the looping is there is no way to track which decisions you have made. It’s quite easy to track today since others have written guides for it, but the game doesn’t give you the help. You have to remember every place where there was a decision you didn’t choose and go back to do it. Without the internet to help, you can easily reach the same ending twice by mistake.

After completing the game and looping back to the start of the game, your characters state is preserved. You get to keep all your character progression and unlocks that you got in the previous run. This makes the replaying of story segments a lot less painful.

There are some minimal RPG elements to the game like skill trees, XP points and the ability to enhance your character. Power gems are inserted into your armor to grant buffs to attack, defense or some other powers. The hunt for new gems becomes a lot of fun, but it burns out very fast. The pacing of all the RPG elements to this game are way off 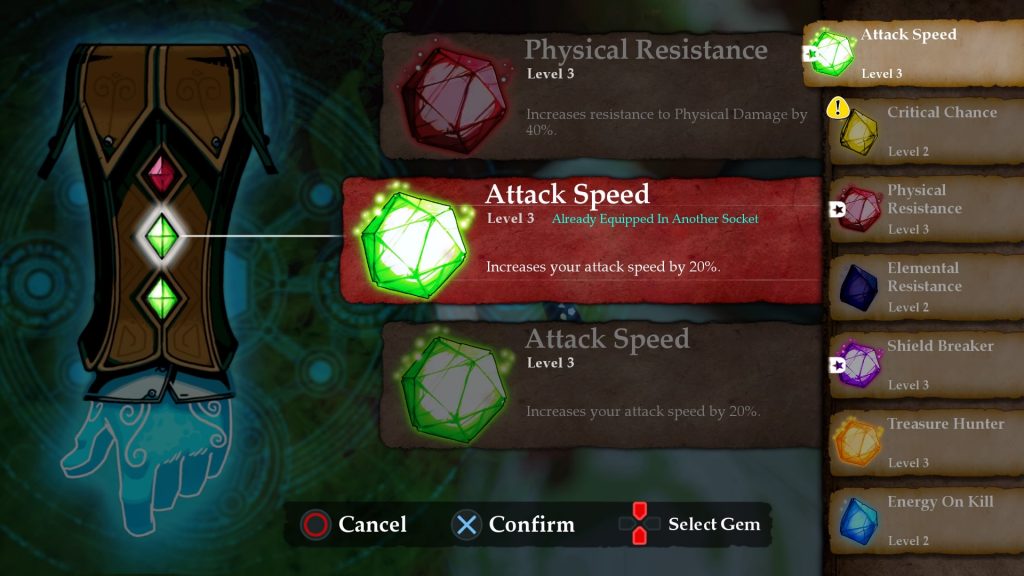 After beating the game 5 times (about 2.5 hours of game time), I had maxed out all the weapon upgrades. Unlocked all the moves and abilities. Collected and maxed out all the power gems and had a decent amount of the skill tree unlocked. All that was left was for me to grind the hell out of the game until I reached the max level. Something that would in no way benefit progression.

The combat system was quite surprising. It wasn’t actually that bad. Yet, It did come with its flaws. The combat is very hack and slash, fun if you are into this. Unlike Ninja Gaiden and Devil May Cry, it lacks precision and fluidity.

When you counter an enemy attack, you are unable to counter another for a brief period. This ends up breaking your combo when two enemies attack very close together. There are various moves that block the counter, leaving you open to enemy attacks. In real life, this makes sense, but not in a game. The grapple item can’t even be interrupted. Once you commit to using it, you have to hope nobody tries to attack because you can’t cancel the animation. The combat is so close to being good, but due to these flaws, it ended up just being frustrating.

The visuals are nothing to really shout about. The game looks fairly good for the most part, but there is nothing that stands out about it. The framerate dipped quite often during more intense scenes. Areas that contain cannons seem to be affected the worst. It doesn’t come to a complete halt, but it gets a bit choppy. Generally speaking, there isn’t a whole lot of bad or good to say about the visuals, they were fairly average.

Visual quality is ok, but there are regular visual glitches. Glitches like the floor not appearing being a big one. You don’t fall through the floor, it is still there, but the textures don’t show up. Having played the levels over and over, you can still find your way, but if you are unlucky to have this happen early on, you will be forced to restart. I also glitched out a few times while moving between ledges using the grapple. You magically appear back on the ledge after you fall off, but it looks quite bad when it happens. None of these glitches ever broke the game for me, but they hurt the experience. 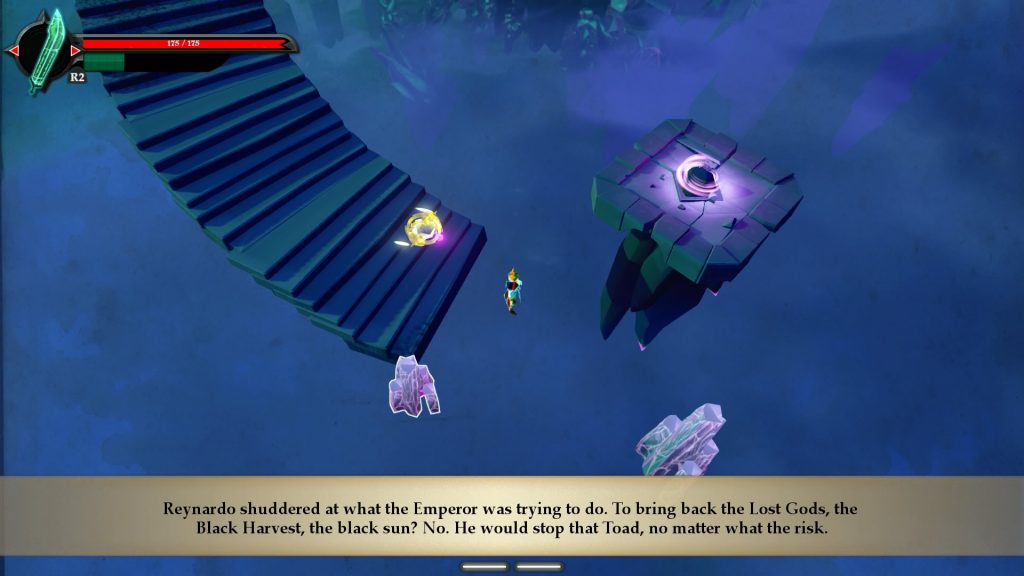 It feels as though this game was based on a good idea that morphed into something different. The developers biting off more than they could chew would be an accurate way to describe this game. The end result for Stories: Path of Destiny was a game that has a lot of ambition that did not fit within the scope of what the game could do.

6/10
Stories: Path of Destiny has a lot of good ideas and tries to implement them as best it can. Ultimately, most of the best ideas fall a little short of the mark. The combat is ambitious but ends up being sloppy. The story is large but ends up being repetitive. The RPG elements are fun, but most of it is maxed out very early in the game making it sort of pointless. Everything that this game does, starts out well, but always falls short. In most cases, these drawbacks are enough to ruin the experience. The end result is a game that tries to do a lot, but doesn't try hard enough.
Pros
Cons