Stick It To The Man is a beautiful and wacky adventure through a cardboard world that brings back childhood memories of cardboard villages. The games unique artistic style combined with witty humour and fun puzzles make for a highly enjoyable experience and a much welcome break from head shots and explosions.

Stick It To The Man is a semi 3D side scrolling puzzle/adventure game. When I say semi 3D I mean the in game assets are made from paper and cardboard. When the main character turns around you can see he doesn’t have a side, just a front and a back. This was something that I really enjoyed! It reminded me a lot of LittleBigPlanets with the environments looking as though they was made up of home made materials. 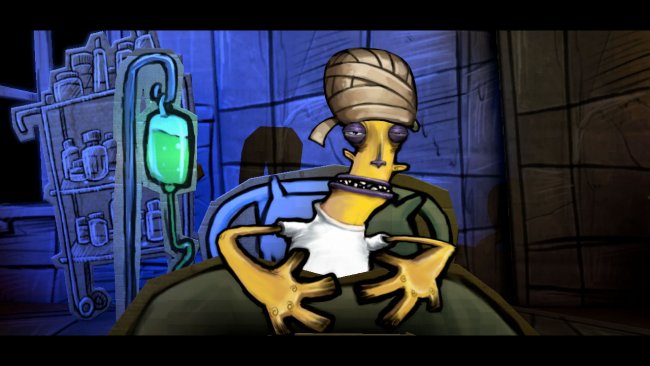 The story follows a character named Ray who gets a hard knock to the head while working. The knock didn’t cause him much damage other than the fact that he now has a giant spaghetti hand coming out of the top of his head! The story that follows the events after this will lead you through grubby down town streets, a mental asylum and even outer space! The story is funny from start to finish. The characters, environments and puzzles provide plenty of moments that will make you laugh. As you might guess the majority of the story is centred around the hand coming from your head. This hand is also what shakes things up a bit and stops Stick it To The Man from being another generic platformer. The way in which the stickers are used to solve puzzles is brilliant. While they are not incredibly hard puzzles to figure out you cant help but appreciate the effort that went into thinking these puzzles up. Sticking a crying baby’s mouth onto a microphone to simulate an alarm activating is a nice example. 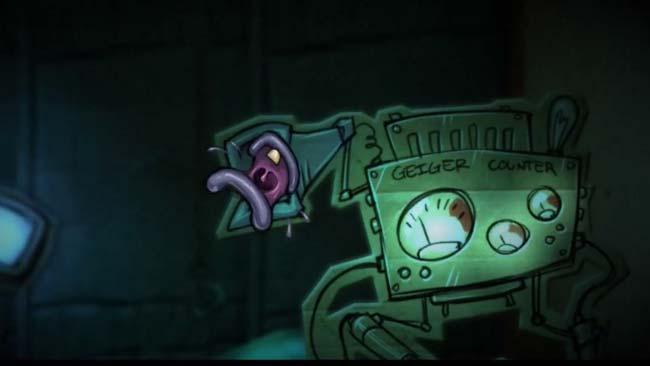 The core gameplay component is a basic platformer. You jump around platforms and run up and back inside a 2d environment where you can attempt to evade security guards and solve puzzles by finding stickers and placing them in certain places. The game starts to get interesting when you bring the spaghetti arm into the mix. The arm is used to interact with everything and is responsible for almost all actions apart from jumping. You use the arm to take stickers from NPCs and use the arm to place them on objects around the game. In order to obtain these stickers you will often need to read peoples mind, this is another kick ass thing you can do with your spaghetti arm! Upon reading peoples thoughts they can either provide you with a sticker or with a thought bubble where you can place a sticker to progress with the story. The hand is very simple to get the hang of but it does run into issues sometimes when there are multiple things close together that the hand can interact with. I often found myself getting killed because the hand would latch onto a pin instead of a sticker causing the character to spring into the arms of an enemy. In general the arm was very easy to use and was quite a lot of fun.

Each of the 10 levels in the game provide you with plenty of fun and entertainment. They take you through plenty of diverse environments and tend not to have to many puzzles that are similar to solve. There are often points where it is quite difficult to figure out what to do next since the game doesn’t really give you much of a prompt. This resulted in me running up and back through a level hoping to spot something that I missed. The main problem with the levels is that once you have beaten them they offer no enjoyment to play again. There is no real gameplay other than solving the puzzles and once you know how they are all solved there is nothing left. 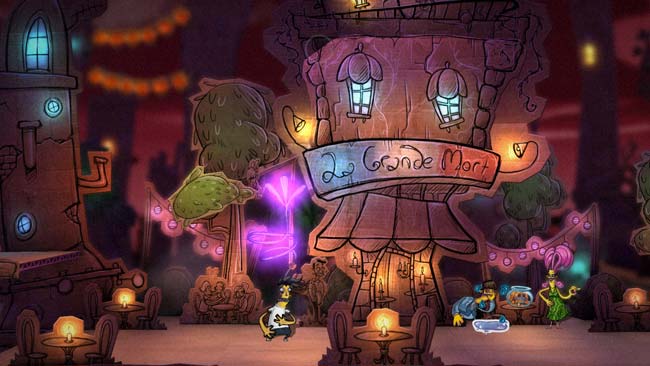 I played this game on the Playstation 4 and the visuals were beautiful. The edges were well defined and contained no jaggies at all. The textures were crisp and clear for the most part which really helped give off the paper craft style the game was aiming for. The main issue I had with the visuals was the film grain that was placed over the whole thing. This might be something that some people enjoy but for me this took away from the overall visual experience.

8/10
Stick it to the Man is a really enjoyable game that gives plenty of laughs and will bring out a creative side in your brain. The game is really pretty and has a great sense of humor! It’s unfortunate that the game is so short because there is very little enjoyment to be gained from playing the game a second time. The first time you play this game will most likely be the only time you play this game so make the most of it while it lasts. Stick to the Man is well polished and is worth every penny.
Pros
Cons