Based on past experiences, the release of a game set in the Lord of the Rings universe is a rather underwhelming thought, considering the majority of games released in the past have been a dry, mediocre experience. Middle-Earth: Shadow of Mordor has completely shattered the image that past games have painted by going in a completely new direction. Rather than the standard linear RPG where you get guided through a badly acted rendition of the movies, Shadow of Mordor has created a brand new open world experience for you to digest. Shadow of Mordor has done a great job in distancing itself from previous Lord of the Rings games, to the point where it doesn’t even have Lord of the Rings in the title. The gameplay, combat system and story provide you with an incredibly enjoyable experience that you will enjoy regardless of your knowledge of the movies.

The game throws you in the boots of a ranger known as Talion. Unline your standard ranger, Talion has some very unique abilities. Without spoiling much these abilities will give you a huge advantage in battle. Pressing L1 will allow you to see the locations of enemies and key targets when vision would normally be obscured. You also contain the ability to possess enemies and make them fight on your side. This gets particularly interesting when it comes to the Uruks military style hierarchy system known as Saurons Army. By possessing a low ranking member of the hierarchy you can help him rise through the ranks to become a warlord by helping him in battle to defeat other higher ranking Uruks. This becomes even more interesting when the games Nemesis system is applied to the equation. 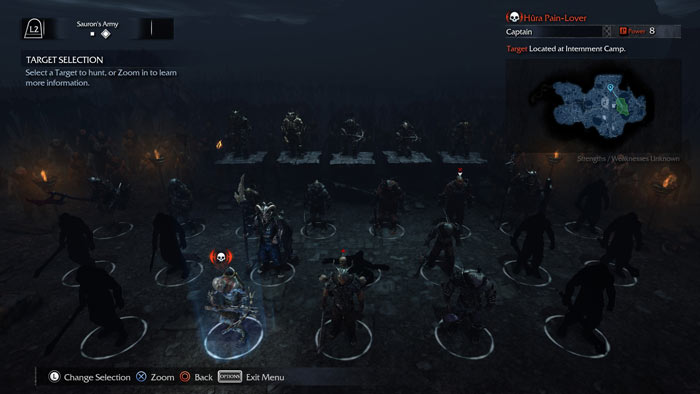 The Nemesis system is an exciting new mechanic that controls the relationships between you and the Uruks. As you explore the world you will occasionally come across captains, generals and other members of the Uruk hierarchy. These are aggressive characters and will initiate combat once they come in contact with you. If they defeat you in combat they will increase in power and remember that they kicked your ass in the future. If you defeat them and let them flea the battle, they will remember that you kicked their ass and will come back next time looking for revenge. The more you get defeated in battle, the stronger the Uruks become.

The story in Shadow of Mordor is completely new. It is clearly inspired by the events in the books/movies, but overall it is a new experience. I cant say much without spoiling it, but it is centred around the return of Sauron. The story is enjoyable, but it is quite short. There are 20 missions in total and id say you could complete it in around 8 hours if you ignore any distractions. There are a lot of side quests to extend the length of the game but they are in no way story driven. So if you are expecting something like Skyrim then you will be let down. The overall length including all side quests is longer than the average game, but still quite short. 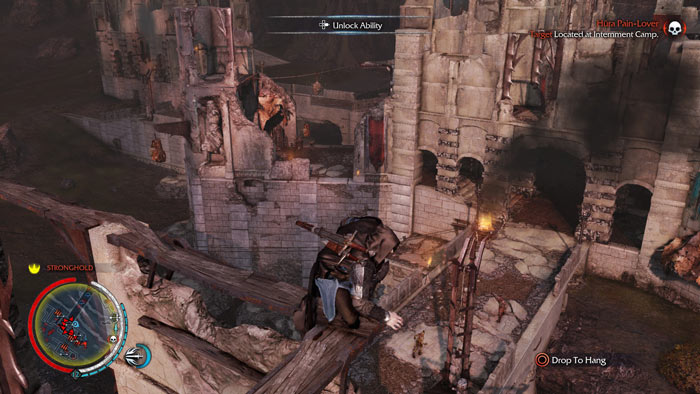 For those who have played any games in the Assassins Creed series you will immediately identify the similarities between the two games. Assassins Creed: Shadow of Mordor would have been an acceptable title for this game as they are very alike. You can climb up walls and sneak around to perform stealth kills on enemies. A coloured triangle above the enemies signal how aware they are of your presence. The combat system allows you to fight off groups of enemies by using acrobatic jumps and rolls to hit an enemies weak spot. Timed button prompts will allow you to counter or dodge enemy attacks. There are finishers that you can perform on downed enemies. As you successfully land a hit on an enemy you build up a combo multiplier. When this reaches 8 you can perform an execution which will kill almost every standard enemy. The catalogue of weapons at your disposal is limited. You are equipped with a sword, a bow and a dagger that cannot be replaced. Rather than having to find new weapons you use objects called runes to upgrade your weapons. Runes are dropped by Uruks in Saurons Army. You can apply these to your weapon to enhance their abilities. Overall this gives a more balanced experience since you don’t really need to worry about what weapons you have equipped for a battle. 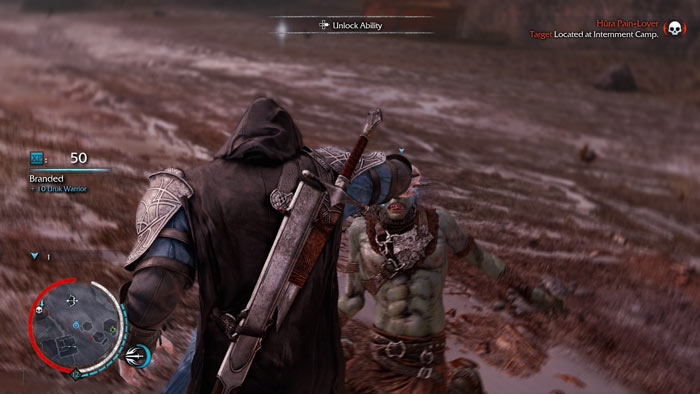 The visuals are one of the games strongest features. The skin textures used for the Orks and Uruks contain a lot of detail. The rain drops falling on puddles, the blowing of your cloak in the wind and the way decapitated enemy heads roll around after you have killed the enemy are only a few of the many small things that help produce such a fantastically detailed world. At no point did I think that this area doesn’t look as good as the last. The visual quality is consistent throughout the environments, which is a real achievement considering the world is quite large. The enviornments are quite predictable, but thats nothing to complain about since the game is set in Mordor.

8.5/10
Middle-Earth: Shadow or Morder successfully delivers an experience that you will enjoy from start to finish. The hours will just fly by as you fight through the detailed land of Mordor. The Nemesis system and Uruk Hierarchy in Saurons Army is something fresh and will keep you entertained throughout the experience. It’s a shame the story couldn’t have been a bit longer. The game is so much fun to play that it’s a real let down when you get to the end of it so soon. This game is a must buy for anyone who is a fan of fantasy hack and slash RPGs. Regardless of your knowledge of the Lord of the Rings franchise you will find your self hooked to this game.
Pros
Cons