Doki-Doki Universe is an adventure/puzzle game where you control a robot named QT3.The main goal of the game is to help out NPC characters from different planets by speaking to them to find out what problems they are facing then if possible summon an object, or speak to another person in order to complete the quest. Summoning objects is quite similar to placing stickers in the LittleBigPlanet games. You will have a collection of objects that you have collected from your travels. If you do not have the object that is needed to complete the quest, then you will have to wait until you have discovered the object to complete the quest. As you complete quests you will come across several quiz type game modes where the game will ask one or more questions, and based on your answer give a result about your personality. All of the results seem to be positive which makes me question whether you can be a bad person at all in this game, but no one is going to give out about a game that tells you how awesome you are! 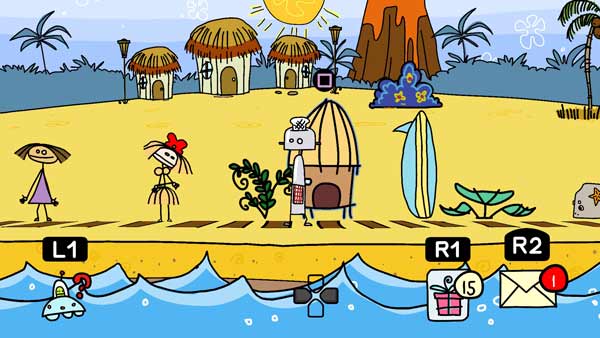 You travel between planets using a creature of your choosing. You can select the default animal from the starting world and summon it using the triangle button. Once mounted you can fly around between the planets and land on any planets that are unlocked. The universe is quite large and contains a lot of planets, but since they are all close together it isn’t much of a problem travelling between them. Each of the worlds or planets has a different theme. They range from a Hawaiian themed beach planet to a dark and gloomy Halloween planet. Regardless of the setting all of the worlds are very upbeat and happy.

Visually this game is really nice. The artistic style is very basic and simple and looks like something drawn up by a child, but at the same time remaining clear and consistent so you can still make out what the levels are about. The objects and levels are drawn in a very innocent and happy way which helps reinforce the positive attitude that this game supports. The objects and characters are very simple on their own, but when you look at it as a whole it paints a very pretty picture that is a treat to look at. 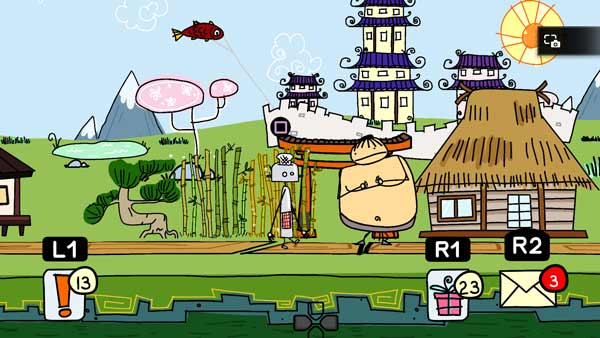 Each world has a different music track that plays in the background. These tracks are always tied to the theme of the world they belong to. After spending a lot of time on a single world the music tends to become quite repetitive and annoying. It would have been nicer if the tracks were a bit longer so they didn’t have to loop so frequently. The game contains no voice acting so there isn’t anything to break up the music and distract you.

6.5/10
Doki-Doki Universe is a fun and happy game to play, but I got bored of it very quickly. After a while the quests became more of a chore. If you have the object you summon it, if you don’t you go to the next world to do whatever quests you can and just keep looping around. This isn’t really exciting to begin with and since it is the foundation of the game you don’t have anything else to keep you interested. While Doki-Doki Universe might not be a fun game for adults to play it is definitely a game that children can enjoy. It’s simple, light hearted and relatively long. There are plenty of worlds to visit and plenty of quests to keep a child occupied for a long time. The game is well made with sharp visuals and a fun story. If you are looking a game to keep a kid occupied, Doki-Doki Universe will be a good choice.
Pros
Cons