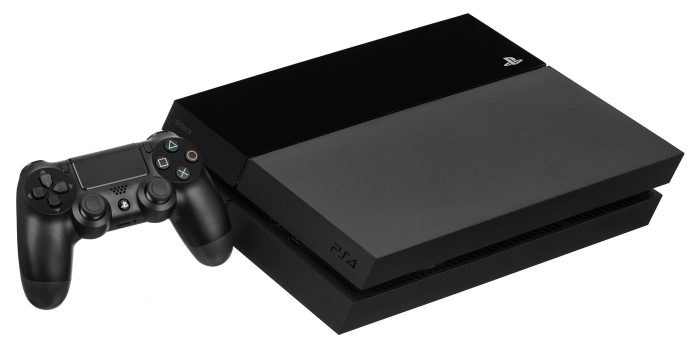 The PlayStation 4 is a video game console developed by Sony. As the successor to the PlayStation 3, it is part of the eighth console generation and is competing with Microsoft’s Xbox One console. The console marked a significant shift in the trend of system architecture for Sony game consoles as this was the first PlayStation console to use a more familiar and easy to use x86 CPU architecture.

As a new and improved system, the PS4 had a lot of cool new features that the PS3 did not. A dedicated chip for the operating system meant that accessing OS features in-game did not come at the cost of the game. Something that was a huge issue for the PS3. This chip allowed for downloading while in-game, suspending apps, and full navigation of the main menu while a game was running.

In the past, there were slim consoles released for each console. These slim models would feature a smaller chip that consumed less power, allowing for a smaller and neater console design. This was true for the PlayStation 4 too with the release of a slim model which was smaller and produced less heat compared to the original PS4 model.

The PlayStation 4 was the first console to feature a console variation with improved hardware components. It was a confusing time for many gamers as nobody was sure whether this was a brand new console that would have games that didn’t work on the older PS4 model.

Many games that were released before the launch of the PlayStation 4 Pro were updated with a patch that gave them a performance improvement on the new model. This usually resulted in a higher frame rate, more on-screen particles or a higher resolution.

Shortly after the launch, a firmware update was released that introduced a Boost Mode to the PS4 Pro. This was designed for older games that were released before the Pro was launched. This boost mode would attempt to improve the performance of games that ran on the new hardware.

The feature worked very well and normally increased the frame rate of games that never received a patch to take advantage of the increased processing power that the enhanced console offered.

Where is boost mode on the PS4?

To use boost mode, you will need to make sure you have a Pro console first. The feature is not available on older models. Enabling it is very simple, here is how to put the PS4 in boost mode.

Some new features were added such as online communities, built-in party chat on the console level and a greatly improved PlayStation trophies implementation, similar to the improvements made for the PS Vita.

If you had a PlayStation 3, you will be able to use the same account to log into PSN on the PS4. You can keep the same PlayStation Network ID that you used for the PS3, but will not also have the ability to display your actual name to your friends. This will have you show up in your friend list with your real name rather than the online ID you use for your PSN profile.

One of the biggest things to come with the PS4 is that online multiplayer is no longer free. This was not unexpected as Microsoft was charging for Xbox Live since it started and were able to provide a much better service as a result.

Sony updated the PS Plus service for the PS4. On top of providing games each month, players will also need to purchase a subscription if they wish to play online with others. Players can still access the store, friends list, communities and most other network features without having to subscribe.

Connecting The PS4 To The Internet

There are two methods of connecting the PS4 to the internet. You can either use a wired connection, this means plugging an ethernet cable into the back of the PlayStation 4 console. The alternative method is to use the built-in Wifi that the PS4 uses. This will let you wirelessly connect to the internet.

Over the years since the launch of the PS3, game streaming and publishing let’s play videos on YouTube have become highly popular online. The PlayStation 3 struggled with this as it did not allow gamers to record footage via HDMI. While the PS4 does allow players to disable HDCP, it also has a built-in game recorder (DVR). This allows users to record footage without needing additional hardware. This has become one of the most popular features of this console.

Recording gameplay on the PS4 is very simple due to the redesigned Dualshock 4 controller. In place of the traditional “select” button, we now have a “Share” button. This button gives players the ability to easily take a screenshot or even record live gameplay. Holding the button will bring up a menu that will allow players to start streaming, share footage and even save the last 30 minutes of gameplay if something cool happened when you had not instructed the system to record in advance.

The PlayStation 4 uses the same style of save game storage that the PlayStation 3 used. This guide will cover PS4 game save data in detail. The short and sweet of this is that your game saves will be stored on the internal drive and you can access these whenever you need them. They can be backed up to a USB stick and copied to another system or backed up for safekeeping.

PS Plus users will also be able to take advantage of a network saving feature. Users will be able to upload their save data to the cloud where it will be safe from data loss. It can also be restored on-demand to any PS4 console if data is ever lost.

It was great news that the PS4 was going to have a common, PC-like CPU architecture. This meant games would be easy to develop for and the Xbox version of the game would no longer have an upper hand. The drawback came with backwards compatibility.

The PS4 is not able to play PS3 games. If you insert a blu ray disc from the PS3, the game will not play. You are also unable to download and install digital titles from the PS Store that were built for the PS3. The only way to play PS3 games on the PS4 is to use the PS Now streaming service.

PlayStation 2 games are also incompatible with the PS4. There are a select number of PS2 titles available on the PS Store as digital games which can be downloaded and played on the PS4, but the selection is limited. Using PS2 format discs will not play if inserted into the PlayStation 4.

The PlayStation 4 is a significant milestone in the history of this home game console. There are obviously a lot of questions that people often have around them. If you have additional questions to ask, you can get help with the PS4 on the QA section of the website. Here are some of the most commonly asked questions.

Do you need internet for PS4 setup?

No, the PS4 can be set up and used without needing an internet connection. You will obviously be unable to take advantage of any of the features offered with a PSN connection and unable to access digital games on the store. If you just want to get the PS4 setup out of the box, there is no requirement for you to be connected to the internet in order to achieve this.

Yes, digital games are only accessible via the PlayStation store. If you want to access this store, you will need to have an active internet connection. Disc based games will work without the internet but you will be unable to download game updates and DLC content that is related to the title.

Do you need to install disc games on PS4?

Due to the size of games and the slower read speed of Blu-Ray disc drives, all PS4 games need to be installed before you can play them. If you are running low on disk space on your console, you will be unable to play a game if there is not enough room to install the game. Installing discs is required, it is not something you can skip to play the game immediately. Some games do offer partial installs where you will be able to start playing right away and the game will continue installing while you play.

Do you still need a disc after installing a PS4 game?

Yes, even though the PS4 installs all disc-based games to the systems internal hard drive, you will still need to use the disc to play the game. This is a security feature to stop one person buying the game and sharing with all of their friends. The game disc will need to be inside the PS4 disc drive. When you start up an installed game, it will check the disc, if it is not there or is incorrect, you will be unable to start the game. You must keep a copy of the disc after you install a game to the PlayStation 4.

How to install a game on PS4 from Disc?

Installing a game to the PS4 internal disk drive is super easy. All you need to do is insert the Blu-Ray disc into the drive of the console and it will begin to install automatically. If there is not enough disk space on the device, you may get an error telling you to delete some content before the game installs. Once you have freed up enough space, you can click on the icon of the disc in the main menu and it will begin to install if it finds there is enough free memory.

Can PS4 games install in the background?

If you are downloading a digital game from the store, the answer is yes. The game will download and install in the background. You can put the system into rest mode and it will work away.

If you are using a disc-based game, you will need to keep the system powered on for it to install. If you are in rest mode, the disc drive does not function and the game will not install.

Do you have to pay to connect ps4 to the internet?

Connecting to the internet on the PS4 is completely free. You can browse the store, message friends, use the community and chat features without needing to pay. The only time you need to pay is if you want to play online multiplayer games with friends.

Does The PlayStation 4 Have Wifi?

Yes, the PS4 has built-in wifi. You can use this to connect to the wifi connection in your home.

Can you make a disc game digital on PS4?

When you purchase a Disc based game for the PlayStation 4, you will need to install it to the system first. Once it is installed, it is technically digital, but you will still need to use the game disc to play it.

If you own a game on a disc, you do not also get the ability to download the digital version from the PlayStation store. It is impossible to convert a disc-based game to be a digital version of the game that does not require the disc.