The medieval times in reality were a pretty awful time to be alive. Food sucked, everyone was poor and everything wanted to kill you in some way or other. When it comes to the world of video games, a medieval setting can make for an incredibly exciting setting for a game.

While there are a few games that attempt to emulate the realism of medieval times, the most popular games will fall under the fantasy side of things where it will be set in the same time period but have dragons and other kinds of mythical beasts.

A Minecraft castle is the culmination of all of your design work when you get started. You have found a village, made it your own…
View all Game Guides 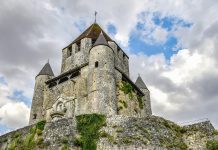 Namegenerator Dan Hastings- October 4, 2019
Most of us are fairly clueless when it comes to the culture from the middle ages. You know a medieval sounding name when you hear it but it’s kinda hard to come up with a bunch of random suggestions right?...