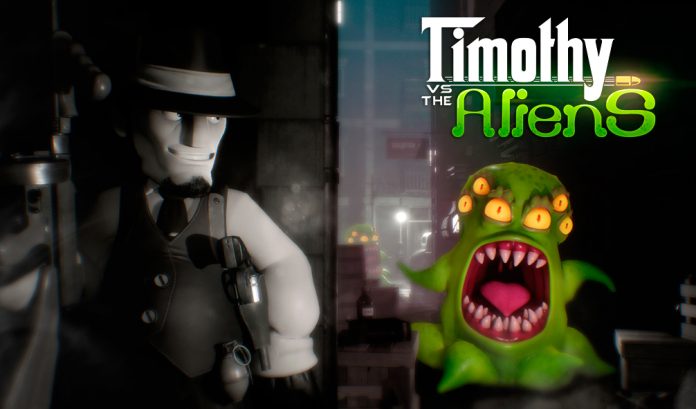 When it comes to alien shooters, there is no shortage of them in todays market. There is a shooter for almost every type of alien invasion scenario. While Timothy Vs the Aliens fits the “aliens got yo girl” cliché, it wraps it up in a unique bow. A black and white, 1920s gangster theme set in an open city….doesn’t really sound that unique either actually but bear with me.

The visual style is the most appealing aspect of this game. The game is in black and white with a film noire style to it. The aliens are the real classic multi-eyed, tentacle aliens that we see very little of in modern cinema. What makes the aliens even more unusual is that they are the only source of color in a black and white world. 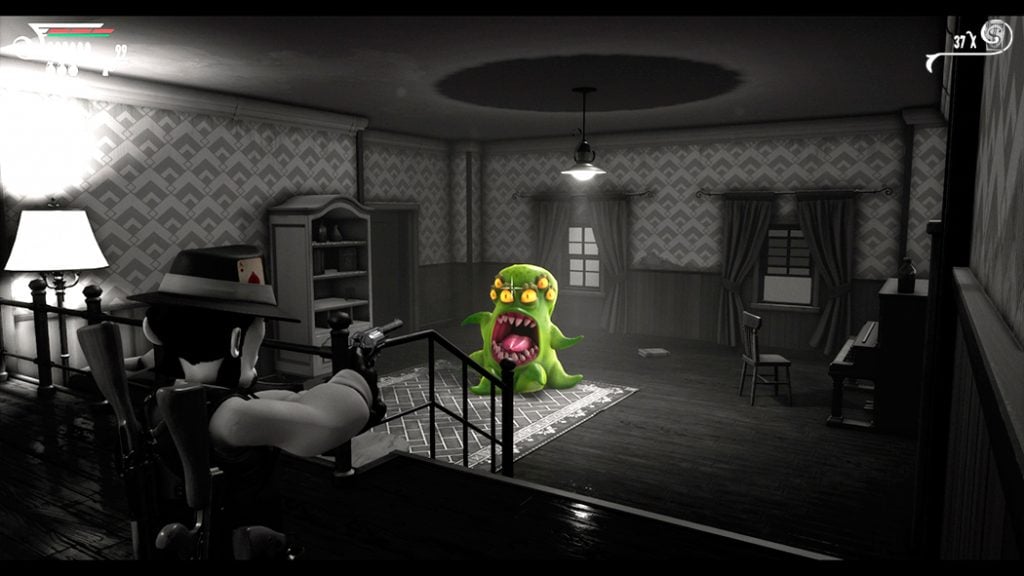 Equipped with a pistol, and later on an automatic machine gun, you must defeat the aliens and save the world. It’s about as cut and paste as you can get for an alien shooter. The storys lack of creativity was the biggest flaw.

The gameplay is solid but uninventive too. Some basic platforming with some solid shooting. Nothing breaks the mold but it serves the purpose. So what is the purpose if it isn’t to be an epic game?

Timothy vs the Aliens stands out as being more of a medium for art than a game itself. The original soundtrack goes above and beyond what you would expect for a small scale game like this. I can’t say I am a big jazz lover, but the music in this game is catchy and really fits the theme. Smaller indie games with origan soundtracks can often be some guy who loves himself playing a few songs on the guitar. To hear big band songs with a range of brass and woodwind instruments is quite unique. To make it all the better, the songs are good enough to be listened to outside of the game.

Timothy Vs the Aliens is a cheap game and when it comes to value for money, you get more than enough. However, this does not help you from feeling like there should have been more. A lot of effort was put into this game to show off something cool and the game itself was forgotten about. There is a relatively large city with pretty much nothing to keep you busy outside of the main story. There would be teams of people out there crying out to have a sandbox like this to build a game in. 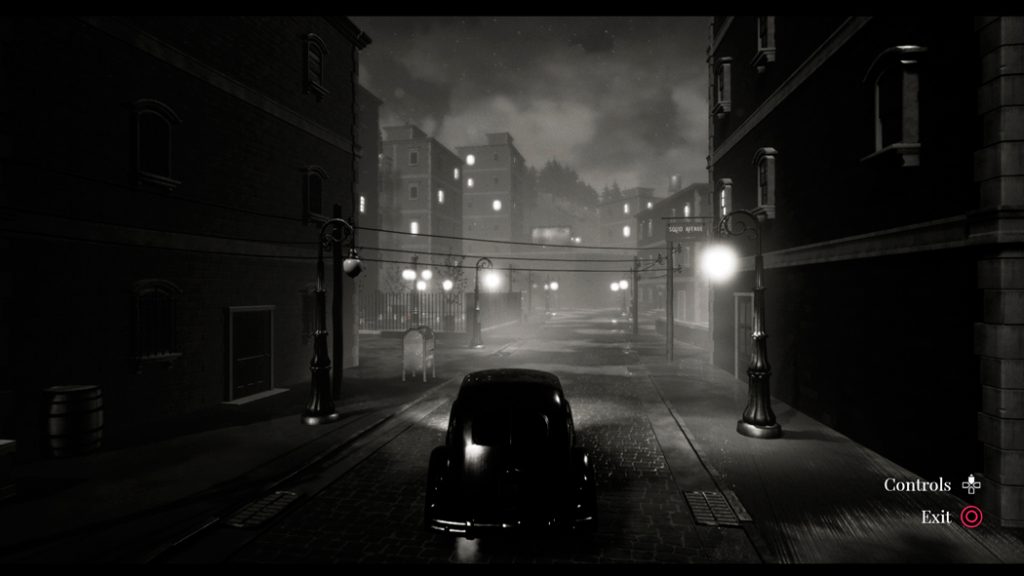 It seems crazy that a dev team would go and design a big city, build effective combat and platforming mechanics, in game economy and have a range of enemies, but do nothing with it. The short 1 hour story does very little to utilize everything that is there. There is SO much room for more. In the grand scheme, it seems like adding some extra side quests and other tasks around the city are fairly small things to do once you have gotten over the artistic hurdle of building a city and the technical hurdle of creating a bug free, playable game.

Whatever the reasons were for the lack of engaging content, the story that was there will provide you with an hour or 2 of fairly unique enjoyment. As much as I feel this game deserves a low score for its many shortcomings, I can’t bring myself to give it a low score. This game is unique enough that it is worth playing. It is just such a shame they couldn’t take advantage of how unique it is to build something that has more stamina.

6/10
As a medium to show off some cool film noir art designs and to channel a fantastic original soundtrack, Timothy vs the Aliens does a fantastic job. The game makes a much better artistic portfolio piece than it does a game. This is good in some ways but is also very unfortunate. The makings are there for this to also be a much better game along with being the art piece that it is. The game feels very unique and has the potential to be a standout game. The story is incredibly short and when critiqued on its own, quite boring. The game is redeemed by the artistic setting and theme that you play through during the short adventure. I wouldn't glowingly recommend this game to anyone, but if you ended up with a chance to play it, you really should give it a go.
Pros
Cons