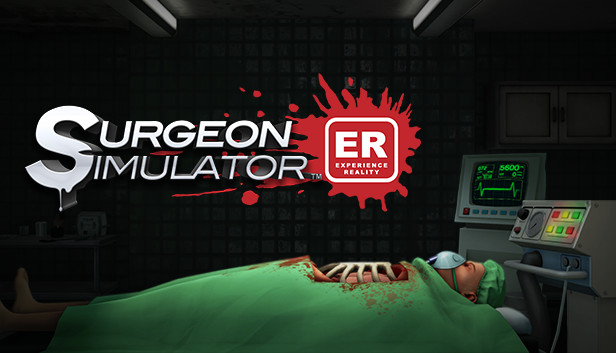 If there was ever a game that was built for VR it is Surgeon Simulator. Performing brain surgery using a pencil and a hammer, why not?! This is a simulator game that really does not take itself seriously…at all. This is something that should be on every VR headset owner’s list.

Surgeon Simulator first released as a non-VR game and it was terrifyingly hard. You had to use a keyboard or a controller to move your arms and control each hand. Picking up a knife and rotating your arm to make an incision was like having to pat your head, rub your stomach and do a dance all at the same time. The game’s humour made it fun, but it was undeniably difficult, even for those who were good at it.

The introduction of VR has turned this game into what it always should have been, a comical masterpiece. Conventional controls are gone in favour of motion controls. This means you have full 360-degree control over your in-game arms by using your actual hands. Picking up a knife and cutting into someone is super easy. So easy that you will find yourself getting through an entire surgery faster than it took to pick up a hammer in the non-VR version of the game.

The game starts out in the reception area. You can play around here if you wish or you can go over to your notebook and pick a surgery to perform. There are a few different major types of surgery, which are absolutely in no way a representation of real life.

Heart surgery will be the first one on the agenda. Nice and easy to get started with. Pick up a hammer and smash through the rib cage, no time for precision here! Pull out both lungs, stomach and any other organs that are blocking the heart. Just throw them on the floor, you don’t need to put them back. Slice out the heart, throw the new one into the chest like a basketball and bam! Job done! This is literally how your first surgery will go and you will be successful.

The sheer medical ignorance and inaccuracies are what make this game so much fun. Your patient can run out of blood, but smashing open his chest with a regular toolshed hammer and ripping out the lungs with your bare hands does not cause them to lose much. Even if you suck, you should be a fully qualified VR surgeon in no time at all.

Before you get overconfident, it is possible to fail surgery. From the moment you start, you can see the patient’s blood level on the TV screen. This number is slowly falling down. The more trauma you inflict the faster this number goes down. Once the number hits 0, the patient is dead and it is game over.

To make your life easy, there are subtle hints inside the body that show you where to cut and what to remove. With a scalpel in hand, you can see small lines on the heart valves that show you where to make the cut so that the patient loses as little blood as possible. These become essential but sometimes are not enough.

Eye surgery is probably the first time you will get stuck. Removing an eyeball does not follow any sort of common sense. Once you figure it out, you will find it funny, but these kinds of things are not explained very well. I don’t know much about eye surgery but I’m pretty sure you don’t stab the eye with a knife and then hit the person over the head with a block of wood to make the eye fall out. Things like this do add a bit of a learning curve. You can either Google solutions or spend a lot of time using trial and error.

The visual style is the same as it was before. Very colorful, cartoonish style visuals with minimal detail. It sort of makes the game feel like that old board game called Operation. You are just picking comical body parts out of someone hoping you don’t screw it all up.

Of all the VR games I have played, Surgeon Simulator required one of the largest play areas I have come across. For the first surgery in the game, the replacement heart is on the other side of the patient you are operating on. Reaching over is fine, but if you do not have enough space, your hand will fall outside of the field of view. Before playing, you will need to make sure you do everything you possibly can to make the play area as large as possible so that you don’t end up having to restart a surgery simply because you can’t reach the items you need.

Bar the issue with the size of the play area, there really isn’t much you can fault this game for. Obviously, you can’t go in here expecting to learn about medicine. If you do learn something, unlearn it before you have become a danger to society!

8/10
Even at its full price, Surgeon Simulator is quite cheap. It is regularly on sale which makes this a game that you have no reason not to pick up. You get incredible value for money with it. Each surgery you perform just gets wackier and wackier. The visuals hide any gore and let you focus on just having fun. You get to perform one of the most serious and intricate jobs in the world without a single bit of stress.
Pros
Cons