Visually Metal Gear Solid V Ground Zeroes looks amazing!The night scenes make it hard to properly appreciate the detail, but the day time scenes have fantastic lighting and in certain areas it makes the environment look incredibly realistic. Textures used on stone, dirt and other nature areas make the game look great. Unfortunately the textures for man made areas such as roads and buildings do not look as sharp and realistic. Jaggies aren’t too common in the PS4 version until you see the ocean which unfortunately looks quite poor. There are lots of jaggies and in general the water doesn’t really look like water. When compared to the ocean from GTA 5 the water from Ground Zeroes looks more like a green sewage. It’s a shame they got it so wrong when Naughty Dog and Rockstar were able to perfect it with last gen consoles. 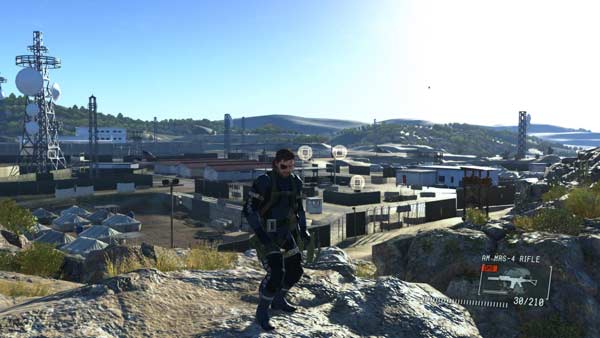 Metal Gear Solid V Ground Zeroes contains a lot of the same game mechanics that we have seen in previous games. You can crouch and crawl around the levels to keep out of sight. You can sneak up on enemies and grab them to extract information, knock them out or murder them if you are feeling evil enough. You have various weapons which you access using the D-pad. You use a traditional weapon wheel to choose a weapon you want to equip, I didn’t really like this. I was quite fond of the way you could select weapons in all the past MGS games. A weapon wheel is what every game uses. It has taken away something that gave MGS its unique charm. The sound the old menu gave off when changing between items is as iconic as the alert sound, which is still in the game thankfully. It felt quite strange to be using a weapon wheel in a Metal Gear Solid game.

Another major change to the game is stealth. In previous games you could see enemy dots on the mini map and they had a vision cone to show what direction they were looking and what their field of view was. This is no longer present and instead you have to be more observant of your surroundings to avoid getting caught. A system similar to a damage indicator in most FPS games is used to alert the gamer if they are in an enemies sight. A white curve will appear on the screen in the direction of the enemy and it will gradually get brighter the longer you remain in their sight. Eventually the enemy will spot you and attack if you aren’t successful in hiding yourself. This system works nicely and does exactly what you need it to do, but like before I feel that this change was unneeded and has made this game less like a Metal Gear Solid game. I have always compared other stealth games to Metal Gear Solid when deciding whether the game was an effective stealth game. I can’t understand why MGS is trying to be like other stealth games. All the games in the MGS series have been incredibly successful in creating an enjoyable stealth experience, there is no need to change this. 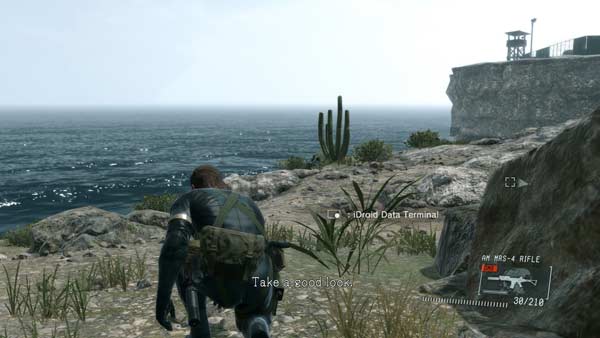 If you have played previous Metal Gear Solid games and understand the story you will get excited about playing as Big Boss again. The character model looks really nice! You can do almost everything that Old Snake could do in MGS4 in terms of moving, crawling and attacking. I found it quite weird that there was no CQC tutorials, but this isn’t the full game so I wont freak out over it being missing just yet. The biggest change in this game is the new voice actor for Snake. Kiefer Sutherland has replaced David Hayter as the voice of Snake and it is definitely one of the biggest mistakes this game made in trying to distance itself from previous Metal Gear Solid games. Kiefer did a good job and he would have made a good voice actor for Snake in the past, but David Hayter is so much better. He has been the voice of Snake since the beginning and he did a great job at it, why change this? There are times where Sutherland makes similar grunts and sounds that Hayter made when he voiced Snake and they just don’t sound right. I know nobody likes change at first, but this is a change that really isn’t going to stick.

There isn’t much to be said on the story of this game since it doesn’t really have one. Rescue a kid then rescue a woman. That’s the entire games story in 7 words. I beat the main mission in 40 minutes. This was on my first playthrough and I spent a lot of time messing around and killing people, not to mention the fact that I failed the mission a few times. On a second playthrough you could complete the main story in 10 minutes without even rushing. This is fine as a demo, but when you are paying $30 for the game it is not acceptable at all! There are several sub/side missions that unlock after the main story. These missions use the same map/level, you just have different objectives. The side missions have very little narrative and don’t really provide much that make the game any more enjoyable. Recycling the environment and giving other objectives with no story is not what I have come to expect from a Metal Gear Solid game.

I purchased Ground Zeroes expecting it to enough to keep me happy until the full release of Metal Gear Solid 5. After playing it I can’t help but feel ripped off. The game looks and plays brilliantly! It really has me excited to see what they are going to be able to do with the full release of the game. I am sure that the full release of MGS5 will be an amazing gaming experience and I really can’t wait to play it. The main problem I have at the moment is that I just paid $30 for a demo. Since when did demos stop being free? The main mission along with all the side missions can be completed in about 3-4 hours, maybe less if you are good at the game. This game is not worth paying for. It is a demo, not a prologue. It has made me excited for the main game, but also annoyed that I got tricked into paying for a game that turned out to be a demo. If Ground Zeroes was free, or even a few euro, I would be delighted with what they have done and recommend that everyone play it, but it was quite expensive and not worth the money. I’m a big MGS fan and I enjoyed playing this game, but unless it costs less than $5 it isn’t worth paying for. Demos shouldn’t cost money and I’m surprised Kojima actually did this.

3.5/10
There is very little on offer here. Multiple missions that reuse the exact same level over and over. While it does give us a good taste of what is to come in the full game, it feels like I was cheated out of my money by even paying for this. Ground Zeroes is a large demo and is not worth the crazy price they are charging for it. I am a big fan of MGS, but this was a cheap move to squeeze money out of fans who were desperately waiting for the release of MGS5. My advice would be to wait for 5 to come out, or at least wait until you see this game in the bargain bin.
Pros
Cons