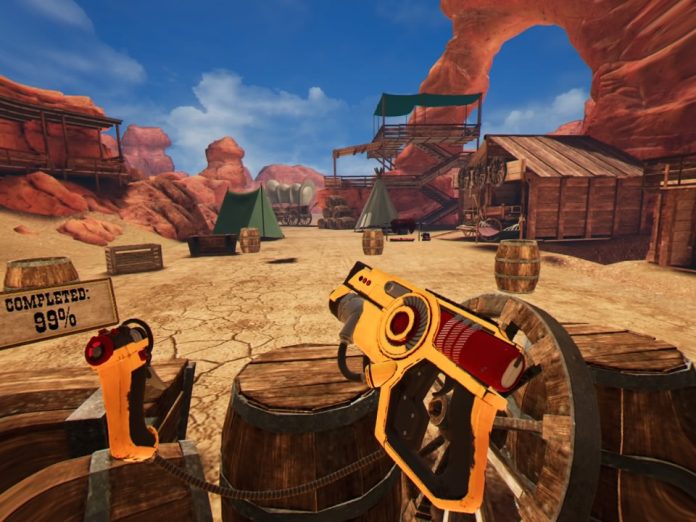 Guns n’ Stories is a wild west shooter with a twist. Realism is thrown out the window as you take on hordes of outlaws using a unique arsenal of weapons and your lightning fast reflexes. Guns ‘N Stories delivers exactly what the name suggests it does. There are guns and there are stories, very funny stories at that!

The game starts out with an old man sitting down with his grandson to tell him some exciting stories from his time in the wild west. The grandfather however, likes to drink a lot of whiskey and very obviously remembers things a little differently from how they actually happened. The grandchild often calls the grandfather out when the story isn’t making sense, at which point the grandfather compensates with a blatant lie that you see reflect in game.

One scene that stands out is when you are holding two pistols and a huge horde of enemies are running toward you. The kid says something along the lines of “you hardly killed all those men with just your pistols”. The grandfather replies “no, I had something much better”. You look down in game and you are now holding a fully automatic machine gun. From here you can unload a hailstorm of bullets. The context makes this funny and the weapons make it awesome!

The method of storytelling makes it pretty clear from the start that this game is not going for realism. This is clear in the way that you defend yourself from enemy attacks. When an enemy shoots at you, bullets are the size of golf balls and travel remarkably slow. Why, you ask? So that you can smack them out of the air with your pistol of course! Yep, that’s right, you can even shoot a bullet at an enemy bullet to deflect it. 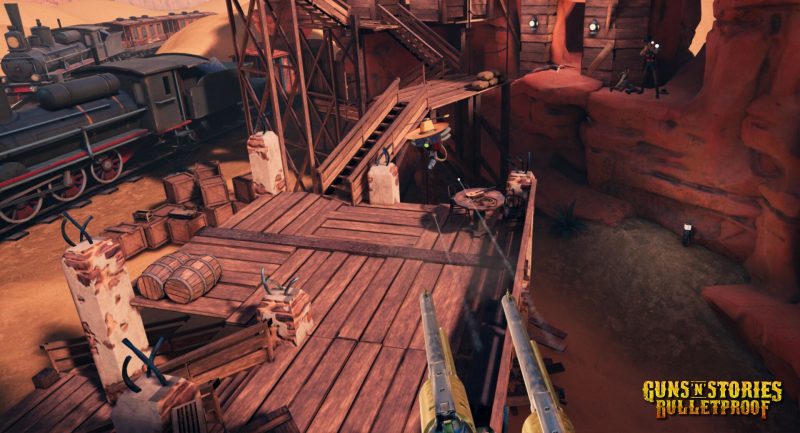 Countering enemy bullets is a serious amount of fun but it comes with a downside. You stand stationary in each level. You can’t move at all. Enemies often sneak up behind you. There is no damage indicator or any UI element to let you know there is an enemy behind you. As you are shooting down enemies in front of you, one guy can be behind you and eventually kill you. The game does offer a slow mo feature when your health drops too low where enemies are highlighted red and you can usually recover here, but I found this quite frustrating. The game would be a lot more fun if it let you know which direction bullets were coming from so you could enter “matrix mode”.

There is a trophy for beating a level without taking damage. Very hard to do when you have no idea when you are taking damage. Even if you did, half of the trophies are bugged and will not unlock. I was let down by this as it would have given me some extra challenge to go back and attempt. I also noticed some weird grammar mistakes. I’m fairly bad for grammar myself but what is going on with this one? “On the level “Saloon” do not give bandits pick up a single bottle”. There are a few more like this too. How do these kind of mistakes make it into a finished product?

The main story of the game is split up into nine levels across three chapters. The levels are quite long, at times a bit too long. A percentage score is shown in each level to show how far through the level you are, something which glitched out at 99% for me and I had to restart a level at one stage. Sometimes, you get a little bored of the same enemies coming in with the same attack patterns. It makes the levels feel a bit drawn out for nothing. Even with the levels feeling dragged out at times, the game can be completed in 2 – 3 hours. 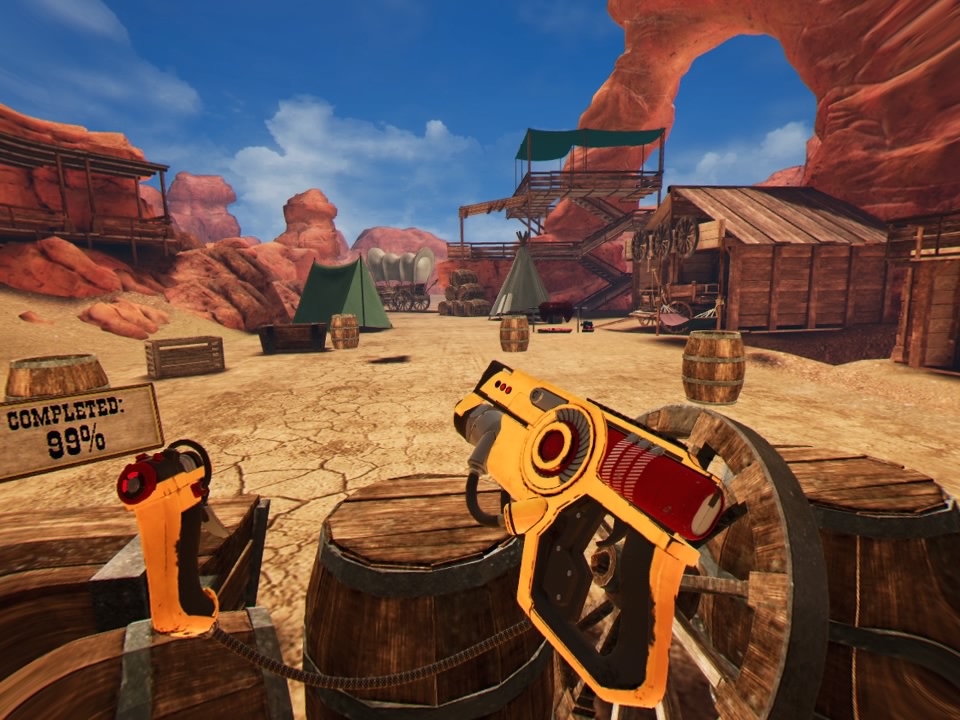 Between each level there is a cutscene that introduces the setting for the next level. This is made all the more exciting by the fact that you get to eat popcorn while you watch it on the big screen!

To give the game some replay value, you can go back and play the story on arcade mode. I couldn’t see much of a difference from the main story other than the game letting you pick from one of three random weapons at the start. This doesn’t make you want to replay the levels all that much.

The weapons in this game are a real mixed bag. The balance is an absolute mess. Some of them are massively overpowered and others are so terrible that you can’t wait for the level to be over. Arcade mode can be annoying when the three random weapons the game offers you are three that suck. The Saloon level is where you first get to use the Tommy guns. These are some of the coolest looking steampunk guns I have ever seen, but they are complete garbage. Even if you burst fire with them, the accuracy is dreadful. 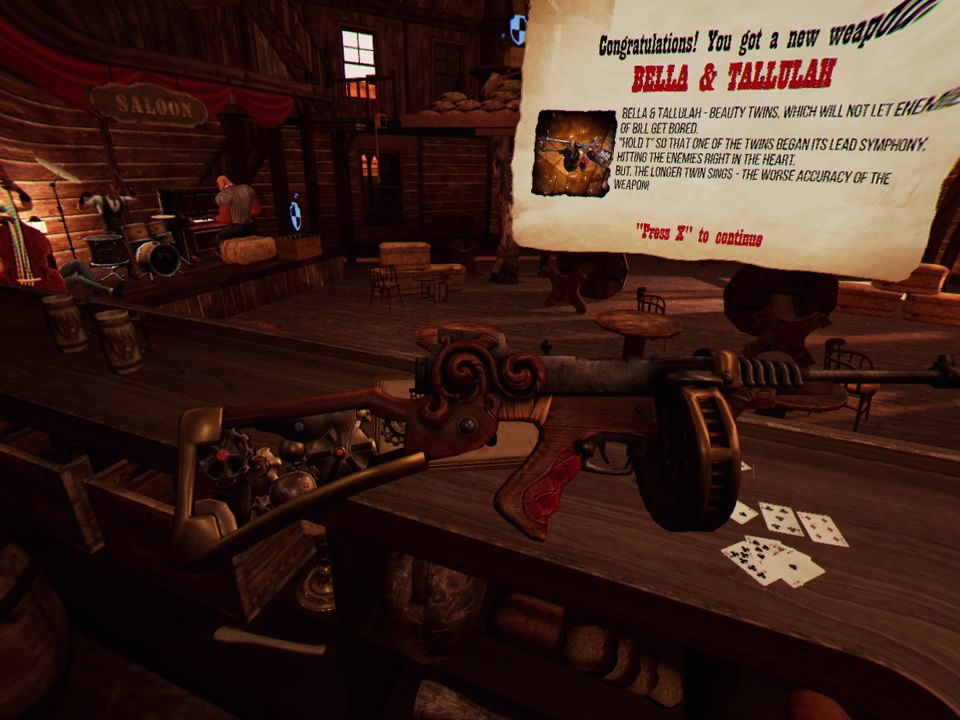 7.5/10
Gun 'n' Stories delivers a fun wild west experience with a very unusual take on the shooting gallery gameplay style. Being able to hit bullets out of the air seems silly but it's a lot of fun, it is just a shame the game does so little to make this a viable defense. It is far easier to focus on killing than dodging bullets. With that being said, this is still one of the more enjoyable VR shooters. The story is funny, the weapons are cool and the difficulty scales quite well. If you have a few hours to spare and want a fun shooting game to play, this game is worth picking up.
Pros
Cons