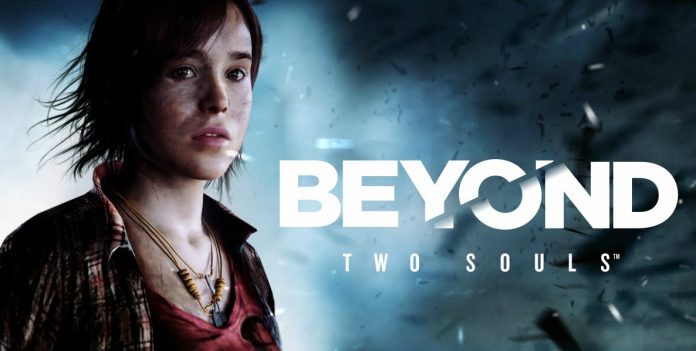 The mind of David Cage (the creator of Beyond Two Souls) is a unique place. He is known to create some fantastic stories that tend to go completely off the rails. Beyond Two Souls is no exception to his track record. Beyond Two Souls takes you through a very unusual story that loses its way for a while before coming to a satisfying conclusion.

Before explaining what the game is about, it is probably worth highlighting the games biggest flaw. The story is not told chronologically. One chapter you are 4 years old, the next you are 20. Typically the events from this “flashback” chapter, relate to the events in the next chapter, but it is a complete mess. You end up forgetting what the hell is going on. At times it feels like the game is trying to tell a story but they couldn’t pick the best way to tell it, so they used every idea. 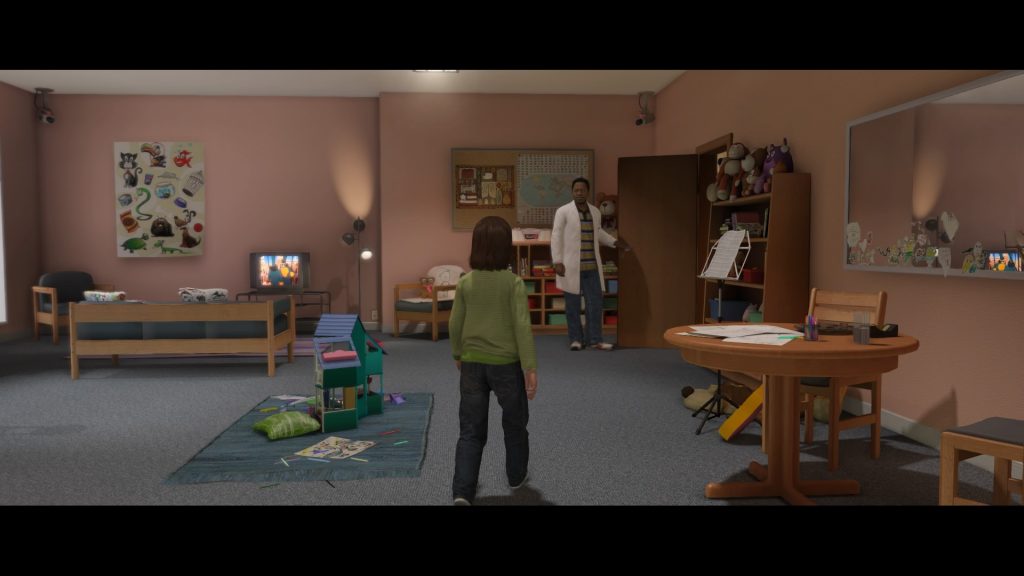 The remaster of the game on PS4 allows for a chronological option, but the context is completely screwed up. You play all the childhood scenes in order, but they make no sense as the chapter was originally intended to be one of the final scenes in the game. Whatever way the game is played, the delivery is incredibly flawed. It destroys what could have been a great story otherwise.

Beyond Two Souls is based around a girl called Jodie, played by Ellen Page. She appears to have some kind of supernatural powers. She can move things with her mind and can physically hurt others without laying a hand on them.

It is remarkable how close the character model of Jodie is to the real-life person. The game’s visuals are incredibly impressive. The character models are at a ridiculously high standard that this game feels like a movie at times. 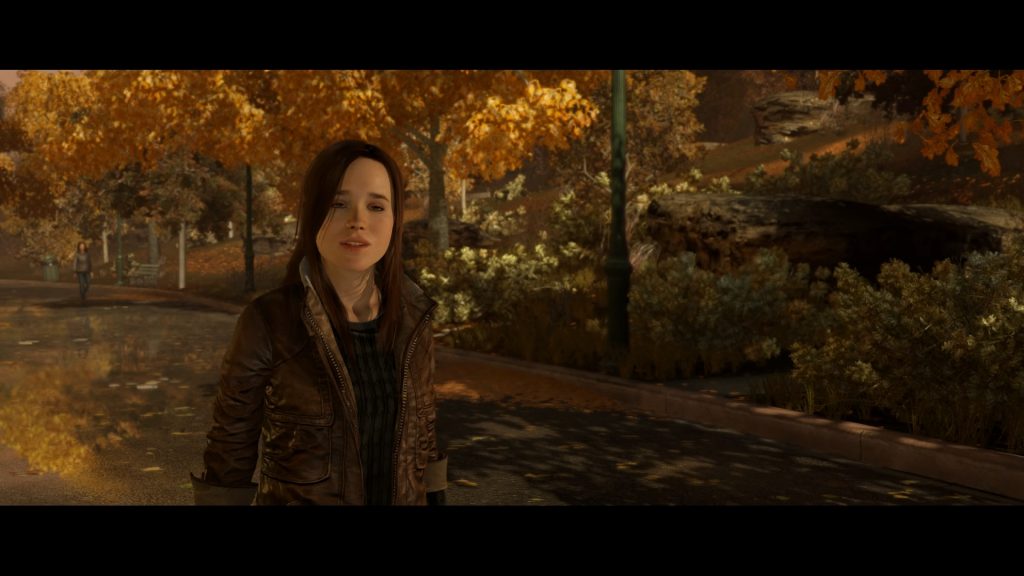 At a young age, Jodie was pulled away from your parents and spent the rest of her life living in a laboratory. They discovered that there is an entity connected to her called Aiden. Jodie can communicate with him and instruct him to perform actions for her.

Who/what this entity is the mystery that the entire game is built upon and it is the games saving grace. This is what makes the rest of the game’s shortcomings such a large disappointment. They have nailed one of the hardest parts down, a story that lures you in. They somehow made a complete mess of the more trivial parts.

The first and most obvious issue with the game is the controls. There are two aspects in particular that make them quite difficult. White dots are used to highlight things you can interact with. However, they are nothing more than plain white dots. Against a light colored background, these dots can be very hard to see. Even when the game prompts you to interact with something, it’s can be hard to locate the dot to trigger the interaction. 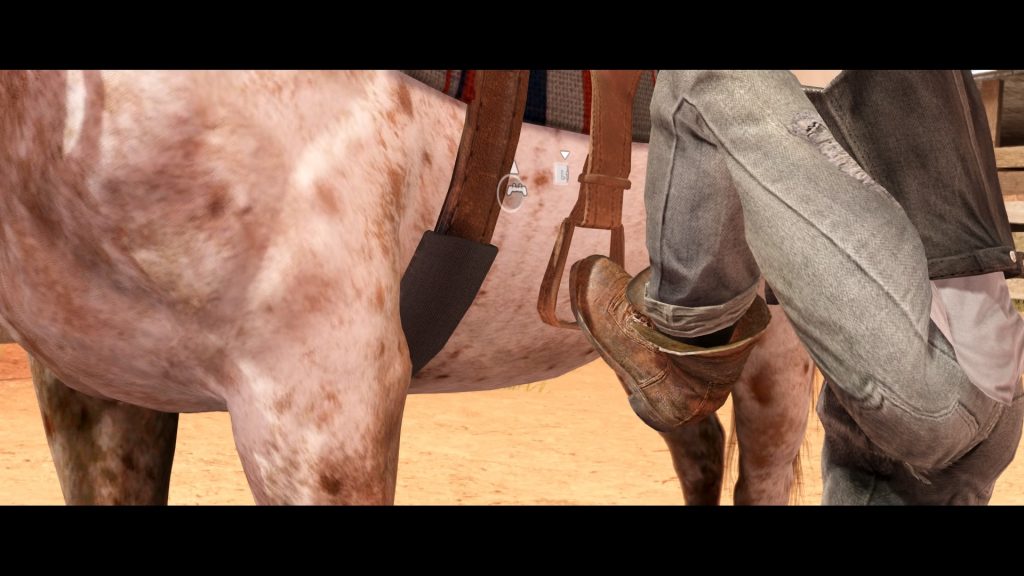 The second and most infuriating part is the quick time events. During intense scenes, prompts might pop up that will greatly influence the outcome of the story. The problem with these events are.

1) The prompts are often hard to see. Sometimes I failed without even knowing I was meant to be doing something.

2) They are often hard to understand. Failed even more not understanding what the prompt was asking me to do.

3) Half the time you perform the action that the game is suggesting and you fail it anyway.

Another example of why the controls suck *Minor spoiler ahead, skip this paragraph if you don’t want to know*.  Early on in the game, you will take control of Aiden. This is from a first person view and you sort of fly around. The controls for this are difficult to use at the best of times. When you are under pressure to do something quick it is an absolute shambles. Moving the camera around seems to need excessive reentering. Moving up and down is just a huge pain in the ass.

The camera controls are quite similar to what I mentioned in the previous paragraph. There are a few stealth missions and the camera controls are just so clunky. It gets very difficult to target enemies or even spot them because the camera seems to have a mind of its own. Motion blur is useful at times, but when you need precision during stealth scenes and you are fighting with the camera, it becomes a blurry mess.

At this point, the game has hooked you in with a massively interesting story idea and has shat all over you with desperate controls. From this point it just goes off the rails. Without going into detail, a story that should be about a spirit takes you to the middle east to fight terrorists, being homeless, to trekking through, to the Mojave desert fighting against monsters plaguing Native Americans. There are buckets of other tangents that will only spoil the game If I mention them, but they make no sense. The story is completely incapable of sticking to anything for more than one chapter.

You will more than likely find yourself sick of this game by the time you are about halfway through it. They tease you with something cool and then just throw on a bunch of random ideas that distract you from the cool idea you saw at the beginning. Although the conclusion is quite satisfying, everything between the first hour and the last hour is a total shambles. Even after they attempted to fix the issues with the PS4 version, the game is still too much of a mess to get any real enjoyment from.

5/10
Beyond: Two Souls starts off incredibly well. Realistic visuals, great voice acting and a plot that really sinks a hook into you. Unfortunately, the story takes various tangents that constantly distract from the main plot. Even the tangents have tangents. By the end of the game the story has gotten so convoluted that you can barely make sense of what any of this stuff had to do with the supernatural stuff. Even if you enjoy the tangents, the controls are really difficult to work with. For a game that is based on the ability to make decisions, the controls take a lot of this away from you.
Pros
Cons