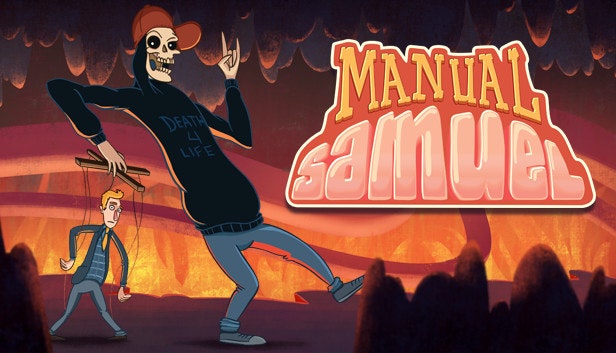 On one very unlucky day, A man called Samuel gets hit by a truck, dies and ends up in hell. Death decides to give him one more chance at life but with strict terms and conditions. What are these terms and conditions you ask? Samuel must go 24 hours controlling all his internal body functions manually. This means remembering to blink, breath and balance. The calamity that ensues makes for a highly interesting experience.

The game starts off strong with some fun and wacky gameplay elements. You must use the toilet, brush your teeth and take a shower. All incredibly boring tasks for a game, but try doing this while also having to control your breathing, blinking and balance. Pissing on the toilet seat is the least of your problems! Mess up with your hands while washing your hair and you get soap in your eyes and you need to blink to clear them up. Forget to breath and you pass out. If you don’t keep your balance right you fall over. Basic things like walking down the stairs become a fun challenge as you must also control Sam’s legs. 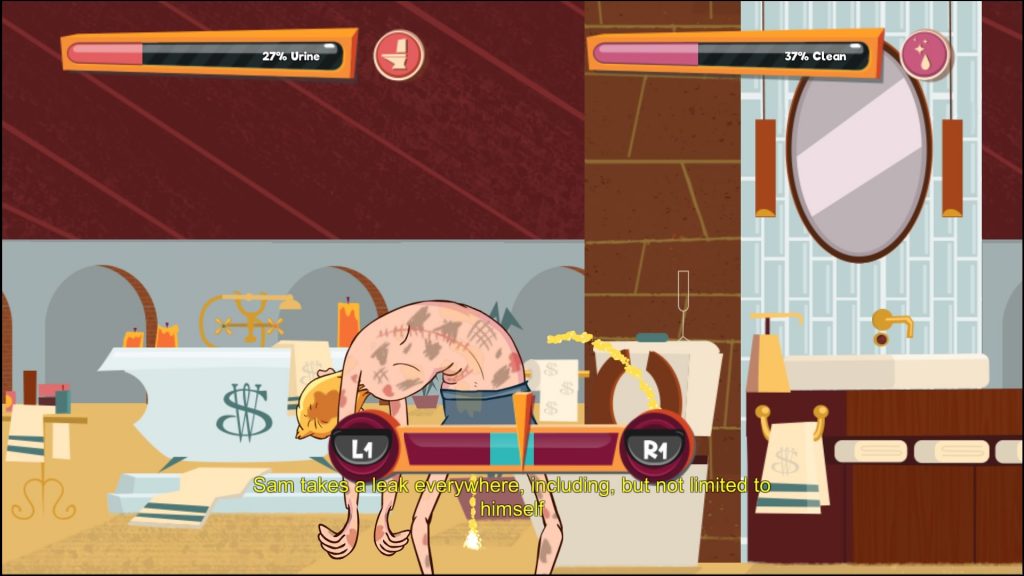 The controls are clunky, but this is the point. It isn’t meant to be easy to manually control everything. You press X to blink, R2 and L2 to move your right and left legs. Square to breath in and circle to breath out. Hands are controlled using R1 and L1 and your balance is handled using the right analog stick. To put it simply, controlling Sam is a serious handful. Try blowing on your coffee and then taking a sip without getting it all over your face. You will have so much fun getting ready to leave Sam’s house in the first chapter of the game.

Unfortunately after the first 2 or 3 chapters, the game started to loose its way and quickly turns from fun to frustrating. The mundane task of walking or putting on shoes are no longer the focus. Instead you are having to battle enemies and bosses. Quickly blocking bullets and countering enemy attacks gets frustrating when combined with the manual controls. This is not a game that suits combat and high precision controls, mainly because it doesn’t give you the means to do so.

The clunky controls are something I enjoyed in the early chapters of the game. However, during combat, you need to be able to quickly block/attack and so on. There is a considerable delay between performing these actions. You use R2 and L2 to walk up to an enemy and they begin to swing their sword to attack you. You are unable to block until the walking animation has completely finished. This usually results in you getting a smack in the face. You stand up, need to blink or even vomit and by the time you have regained control of Sam’s ability to fight, you get hit again. The final boss fight, while simple, has to be one of the most annoying and frustrating boss fights I have ever experienced. 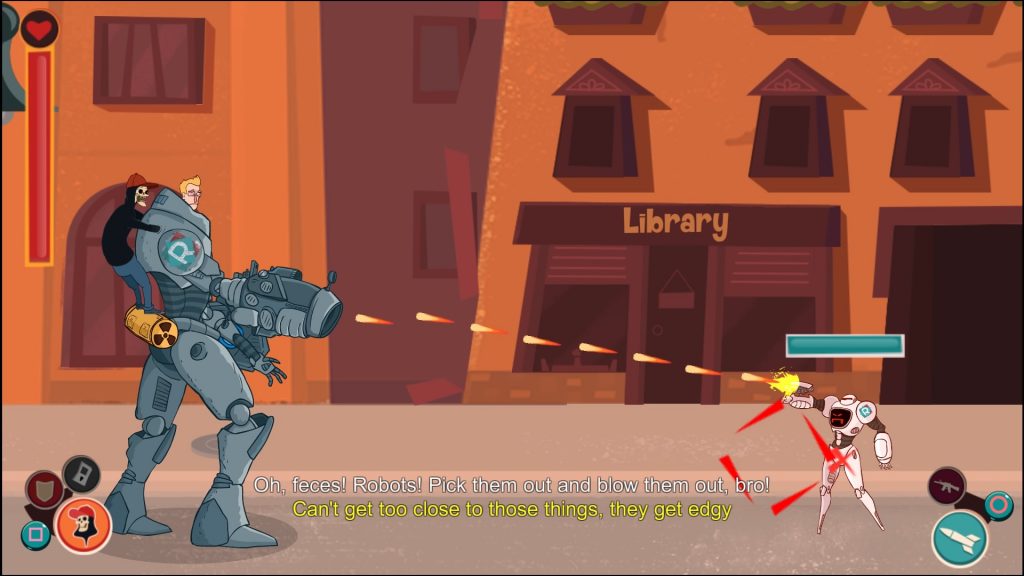 There was so much wasted potential with this game. Spending 30 minutes stacking boxes would have been more interesting than killing robots. I would have enjoyed it if Sam worked at a supermarket and had to stack shelves and scan groceries. This kind of thing would be fun when combined with the manual controls.

As much as I wanted to find something to redeem the game with, I really couldn’t. As soon as the combat starts, this game just sucks and it really is a struggle to finish it.

Outside of the gameplay, I really enjoyed the humor. The entire story is narrated in a very positive way. “Sam walks down the stairs” as you begin to walk down the stairs. The narration will quickly change when you screw it up and cause Sam to tumble down the stairs and land on his face. If you fail a basic task too often, the narrator will break the fourth wall and get annoyed with you directly. Funny at first, but the dialog will repeat over and over if you fail a task. Fail to counter a boss attack 20 times, prepare to hear the same line of dialog repeated each time.

The humor is complemented by the game’s visuals. Very quirky hand drawn style of design. Layouts and designs tend not to make much sense, just like the game in general. The quality is very high and consistent throughout the game. High quality drawings with no jaggies or bad edges. It almost looks like a flash animation, particularly when you consider how badly Sam moves due to you having to control him.

As fun as it is to control all of Sam’s body functions manually, you will eventually get sick it. Far too many gameplay elements are crammed into a game where the control scheme does not have adequate means to support. Manually controlling Sam is fun on its own and they should have kept this the focus. When you must also battle robots and demons, you quickly encounter the technical flaws of this game. It was such a massive shame that the game lost direction as it had something very unique going for it at first.

4.5/10
Manual Samuel has some enjoyable moments and for the first hour or so, you will really enjoy it. The combat ultimately becomes the games downfall. The great humor, clean visual style or the madness of having to control body functions manually can’t be saved by how terrible the combat is. The game quickly goes from fantastic to frustrating. Although I had a lot of fun at first, I really couldn't recommend this game to anyone.
Pros
Cons