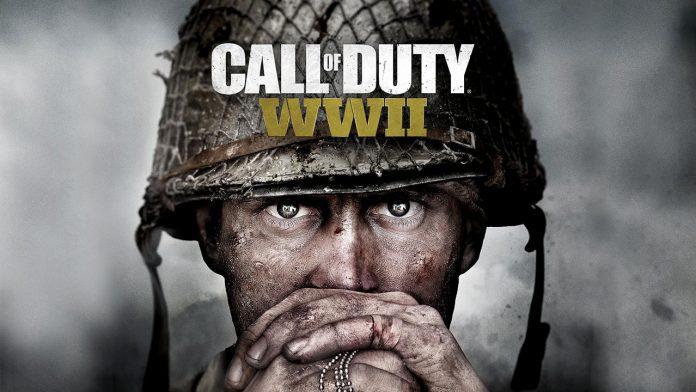 Over the past few years, Black Ops 2 and onwards, my interest in the Call of Duty series has diminished considerably. I can say it was almost entirely down to it becoming a futuristic thing. I got no enjoyment out of jetpacking around the place in multiplayer games. My eyebrows were raised upon learning that the series would be returning to World War 2. Call of Duty WWII was a must buy for me and I can say that I was not disappointed!

I’ll start with the story. It is WWII so it’s pretty hard to fuck this up. The events of this war are a unique part of human history and this game tells a story in an incredibly enjoyable way. You are an American soldier in a squad that is storming Normandy beach. The game takes you through some of the major events that the American soldiers took part in as they pushed the Nazis back to Germany and eventually winning the war (spoiler, not spoiler…you should know the Nazis lost, this ain’t Wolfenstein!). I can’t say how factually accurate the events were, nor do I want to do the research, but I can say is that there is a lot of action! 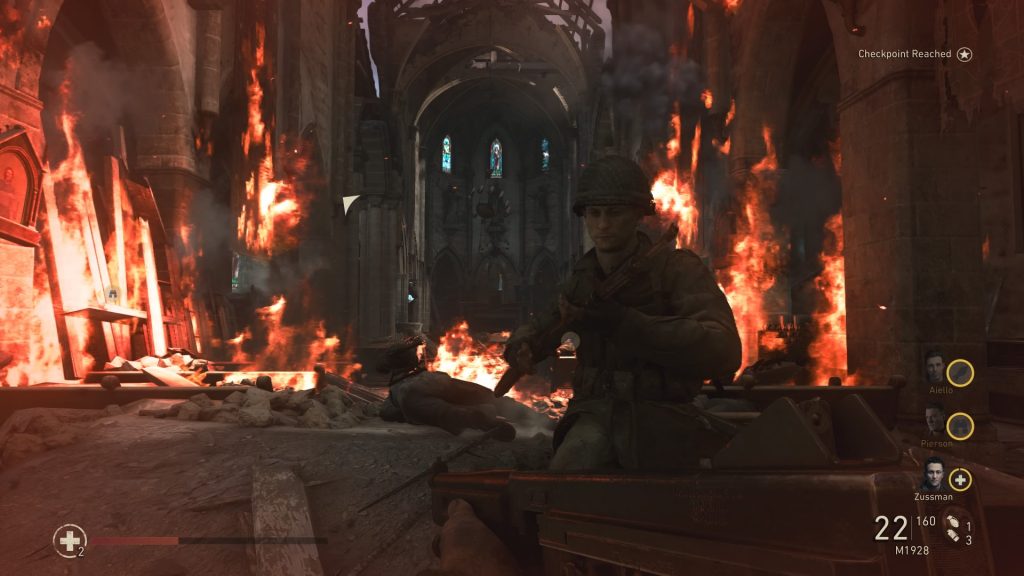 The battles in this game get incredibly intense, far more than I have experienced in any other COD games. This had a lot to do with the modified health system. Your health will no longer recharge magically. You now have medkits and if you run out, you’re toast! Gone are the days of dolphin diving into trenches, waiting for your health to recharge, then jumping back into battle. You could end up in a checkmate if you dive in too deep without the means to escape and this will most definitely happen.  This game throws a lot at you, tanks, dogs, flamethrowers, snipers and mortars. You will find that you grip your controller extra tight as you inch your way through trenches that are currently being pounded with mortar strikes and soldiers hiding around trees in every direction. Particularly on harder difficulties, this campaign gets the heart pumping.

Visually the game is nothing groundbreaking. There are pre-rendered cutscenes for the story that look phenomenal, but the gameplay looks absolutely nothing like it. The game doesn’t look bad nor does it look great. What ist is, however, is consistent. Rather than have some terrible textures mixed in with realistic ones, you have a solid and consistent level of texture quality with a lot of detail and rubble in the environment. You won’t be mistaking the game for Uncharted, but there is very little to complain about with the visuals. 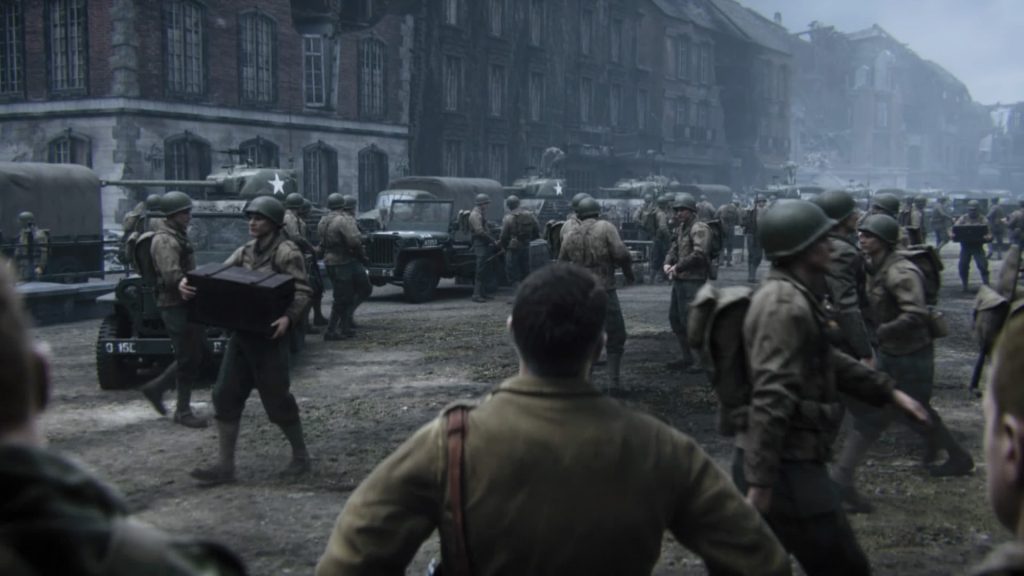 The characters in the campaign stand out as being some of the best and most believable in the series. America did not join WWII in a jet stream of “America, fuck yeah!”. In fact, if it were not for Russia getting involved, the Nazis may have won. The characters you go into battle with portray this very well. You are not fighting in a squad of battle-hardened veterans, you are in a squad of young men who are scared shitless they might die. You get a good sense of the fear and how these guys were just barely surviving. Every single battle has casualties stopping anyone from ever feeling comfortable or in control.

Your squad is quite small and one of the leaders, Sgt Pierson is the character that makes this game what it is. He is the biggest asshole ever. He knows his soldiers are young, inexperienced and afraid. Even when they somehow defy the odds and survive, he finds a way to put everyone down and make them feel bad. I can’t count the number of times that I wanted to “accidentally” shoot him in the head so we would be rid of him. Although I hated him and wanted him gone, he was the main reason the campaign was so intense. You always felt isolated. Like this guy was standing between you and the rest of the military. Almost like he wants you dead. It was a unique feeling to have while playing a game like this and looking back, it was a credit to the writers and the actor that brought this character to life.

The backbone of any Call of Duty game is the multiplayer. game mode It felt like something was different about the multiplayer in this game and it finally dawned on me. There’s hardly any lag and glitches. I am rusty as hell and while I had my fair share of deaths, they were always because I was too slow or someone else saw me first. The performance is actually very good. The maps are also great too with lots of choke points where the action happens. At first, I liked how the multiplayer was kinda like a military camp where you can walk freely around a camp and speak with high ranking members to get side missions and objectives outside of killing other players. However, after a while, I realised that this is just a front to sell loot boxes for real money. So if you fancy being robbed of your hard earned cash, check this out! Loot boxes aside, the multiplayer is one of the best in the COD series I’ve played. I genuinely like it and I’ll be spending more time playing this over the Christmas holidays for sure.

The final thing to mention in Call of Duty: WWII is the Nazi Zombies game mode. We are back in WWII so we can go back to calling them Nazi Zombies again. For those unfamiliar with the game mode, Zombies is a game mode where you must face wave after wave of zombies who get increasingly stronger. Each kill earns you points which you use to unlock guns, ammo, perks and doors. The core game mode is the same as it has been since it first appeared in World at War. One major improvement is the addition of proper objectives. In the past, there was no real objective other than surviving. In Call of Duty: WWII you have a notebook where your objectives and goals are logged. Once you complete all of the objectives you end up with a boss fight on your hands. Something that has been played with in the past, but not to the extent that is has been in this game. The boss fight is a big deal and the work required to get this for make this a zombies map that has raised the bar due to how much has been packed into it. I am really looking forward to seeing what maps they release in the future for this as there is a lot of potential in this game mode.

8.5/10
I can quite happily say that Call of Duty WWII is the best COD game that I have played in terms of the single-player experience. I wish it had of been a little longer, but It is not as short as some games in the past. The multiplayer is also a lot of fun, but if you have been playing Modern Warfare Remastered, you might not find you want to jump ship. For those thinking that there are no good zombie game modes that Treyarch did not create, you will be delightfully proven wrong with this game. As a complete package, COD WWII is one of the best games in the series and is one of the best WWII shooters that I have ever played. If you are sick to death of crazy sci-fi shooters, like I am, this game is worth every single penny!
Pros
Cons