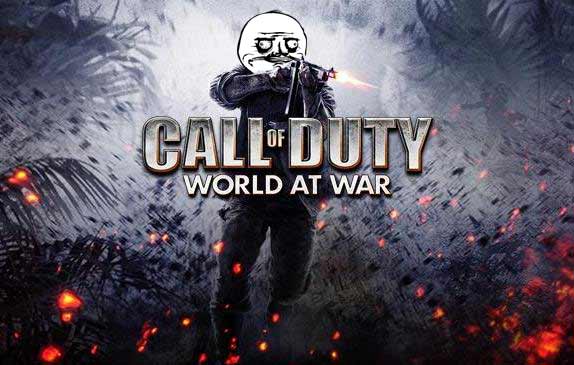 Today I was thinking back on some of the games that I played over the years. It is weird how time distorts things a bit, but for some reason, I have fond memories of getting the platinum trophy in Call of Duty: World at War. There was part of me that was contemplating actually playing this game again, ignorant of the amount of stress and anger I went through to beat the game on veteran the first time. This got me wondering whether I would actually replay old COD games on veteran difficulty.

I like a challenge in a game now and then, but for me, veteran difficulty on some of the earlier Call of Duty games was ridiculously difficult. I think that most people will agree that a challenging game is fine, so long as it is fair. No one wants to play against AI that has superhuman accuracy, can absorb bullets like a sponge and seems to defy any sort of realism. Considering the AI knows where you are at all times, even when they cant see you, immediately makes things unfair.

This is always what has made online multiplayer a little fairer. You are against other humans who have the same knowledge as you. If you die, you just need to get better at the game. It doesn’t help when some kid with a some stupid xbox gamertag is giving you grief but it still feels fair.

World at War is one game that sticks out in my mind as being incredibly guilty for this. Not only could they shoot you before they even see you, but they could hit you in the face with a grenade from halfway across the map. To make matters worse, they would spawn infinitely until you get to a certain checkpoint. It’s either be Rambo or be killed. Anyone who has played the game will remember the scene, you step into zone with enemies nearby and before they officially “spot you”, there are 9 grenades at your feet.

Despite the completely unfair AI on veteran, I still kind of want to go back and play it again. Maybe it is just because it feels like forever since we had the mad saturation of WW2 shooters, but I am keen on playing this game again for whatever reason. I’m sure once I am 10 minutes into the first chapter I will be standing over a broken controller on the floor and regret that I ever played this game again.

It seems the longer I go without a new game that I really get into, the more nostalgia erases the bad experiences of old games and only makes me remember the good parts. World at War was a game that I played back in my days of extreme trophy hunting. I’m not quite sure I would have the dedication to put up with the shit anymore if I were to replay it. This is starting to feel a bit like my interest in wanting to play World of Warcraft again. I really want to play it, but I know it is probably better for my health if I stay away.