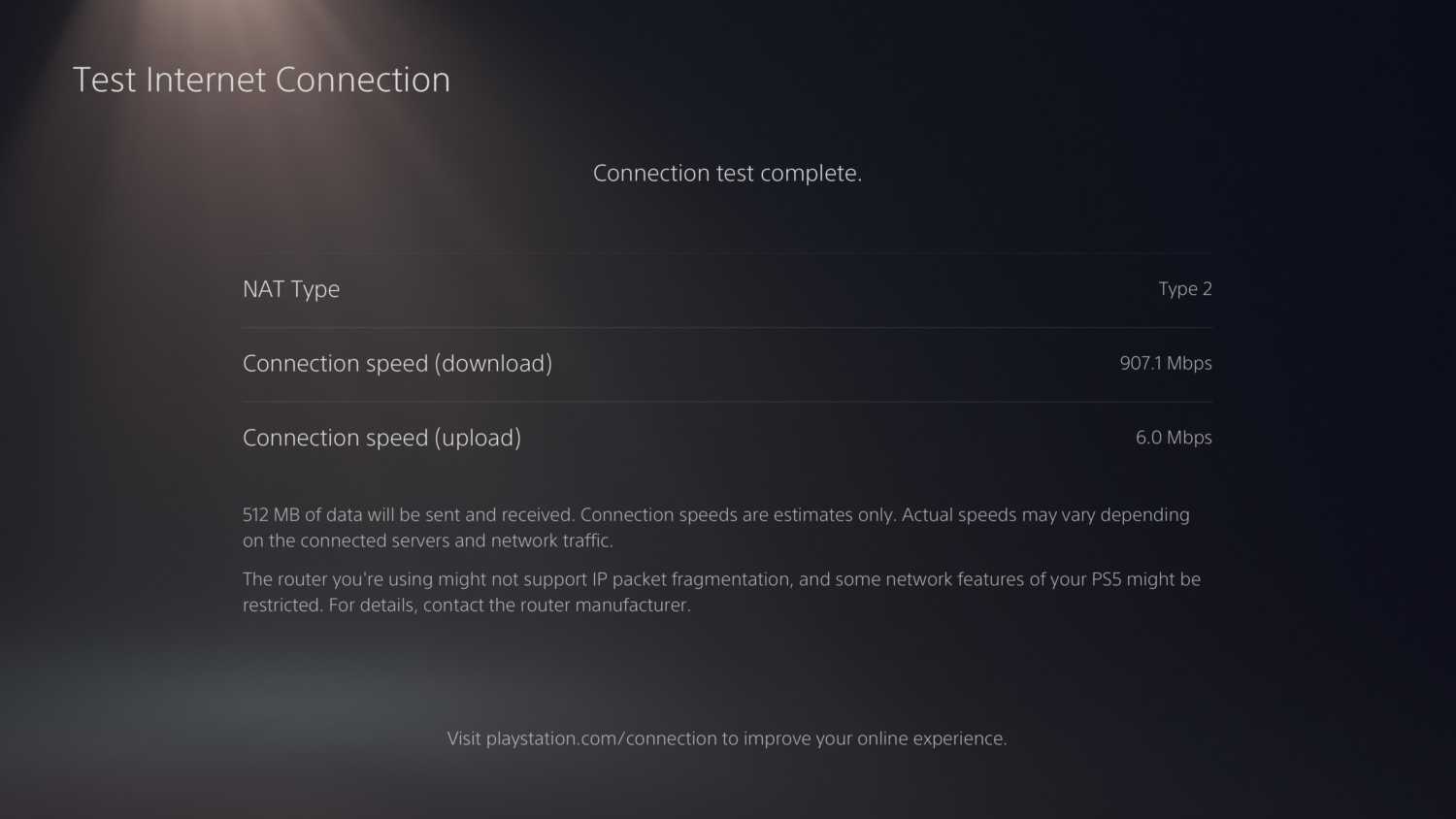 When running an internet connection test on the PlayStation 5, you may notice a warning message appear at the bottom of the page relating to IP packet fragmentation support. It isn’t easy to see as it requires you to scroll down. But it is an important warning message all the same.

The router you’re using might not support IP packet fragmentation, and some network features of your PS5 might be restricted. For details, contact the router manufacturer.

The resolution is telling you to contact the router manufacturer but how do you go about doing this. They may not understand what this tool on the PS5 does and might not even be willing to help when you are unable to give them anything more specific than this error message.

From the screenshot, it is clear to see that with a 907.1 Mbps download speed and upload speed of 6.0 Mbps is pretty awful and is a sign that there is a problem. The resolution may not be with the router manufacturer. Here’s how I solved the problem.

Since the router I am using is for a gigabit connection and was only 2 years old, I felt fairly confident that the router was not the problem here. It most definitely wasn’t broken and it was nothing to do with a lack of features. What also reassured me of this is that I have never seen this error message before. It only just appeared. Since the router did not change, the ISP had to be the cause of the problem.

ISP’s are fairly notorious for shifting blame away from themselves for as long as possible before admitting fault. This may not be an easy conversation to get to the bottom of but if you are persistent, you will get them to look at the problem. Here is a line you can use to explain the problem to the ISP.

“I am having some troubles with my upload speed on a PlayStation 5 console. I have run an internet speed test on the device and I see that the download speed is fine but the upload speed seems restricted. There is an error message appearing on the screen saying that the router does not support IP packet fragmentation and to contact my service provider for help.”

This informs them that upload speeds are slow but the download is fine. It also lets them know that the system has identified IP Packet Fragmentation as the cause. Something that the average internet user has absolutely no understanding of. Fingers crossed the person on the other end of the phone for your ISP does know what it is.

In my case, the person on the support team was well educated in networking and knew what IP Packet Fragmentation was. She guided me through some basic troubleshooting steps first before noticing excessive packet loss coming from my connection whenever I ran a speed test on the PS5. This was enough to raise a technical fault which an engineer had fixed within the day. Problem solved!

This is something that you should never really need to dig into but it has been a solution to the problem for some people who are dealing with some unconventional configuration on their home network.

If you navigate to Network settings->Set Up Connection->Optioons button on active connection->Advanced Settings. You can scroll down and find that MTU is an option at the bottom of the page. You can change this from automatic to manual. The big question is, what is the correct value?

The value depends on your network. It is 1500 by default. I ran a speed test on my Xbox and the automatic value given to the MTU was 1480. This may be a good place to start. Enter this as the value and try another speed test. If it doesn’t fix the problem, try to lower the MTU. If you are going lower than 1450, it might be better to get help from your ISP on the problem instead as you are going to end up going down a confusing rabbit hole of networking.