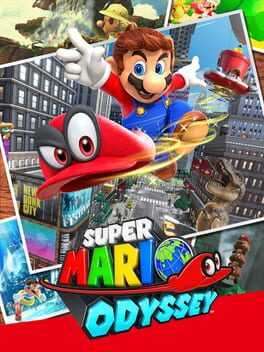 Explore incredible places far from the Mushroom Kingdom as you join Mario and his new ally Cappy on a massive, globe-trotting 3D adventure. Use amazing new abilities, like the power to capture and control objects, animals, and enemies to collect Power Moons so you can power up the Odyssey airship and save Princess Peach from Bowser’s wedding plans!
Game Guides - Questions & Answers

I have just seen a female koopa with a red hat. When I got close, she ran away. What is the story with this? Is there something I need to do?

Super Mario Odyssey
Why do the Chain Chomps in Mario bark like dogs?

Super Mario Odyssey
How do you damage the lake kingdom boss in Odyssey?

I’m fighting the dog boss in the lake kingdom and I can’t see any way to hurt him. I’ve tried to backflip over his hat and hit him, sneak around behind him when he throws the hat and various other combinations of attack, but nothing works. How are you meant to damage him?

Super Mario Odyssey
How do you jump on your hat for a boost?

Ive seen videos of guys getting to secret areas by jumping on the hat in order to get like a double jump or a jump boost in Super Mario Odyssey. Whenever I throw my hat at a wall it comes back to me right away before I get the chance to jump on it. Do […]

Super Mario Odyssey
How do you catch fish in the Oasis with the cloud guy?

I am in the desert world and I’m at a little water pond to the right of the ship. There’s a guy there floating on a cloud with a fishing  rod. Ican see the fish shadows below the water and they nibble on the line when I drop it down, but nothing else happens. I’ve […]

At the top of Fossil Falls, near the area where there was a boss fight against the fat woman and the chain chomping thing I found this large metal cube. It could also be stone but it was polished and looked quite futuristic compared to the rest of the stone in the area. The hat […]

Super Mario Odyssey
What is the empty picture frame below the waterfall for?

I fell into the water at Fossil Falls and underneath the waterfall I found a cave with an empty picture frame at the end. The hat on my had asked what the purpose of the picture frame was, but it didn’t do anything else to give a clues on what this item actually does and […]