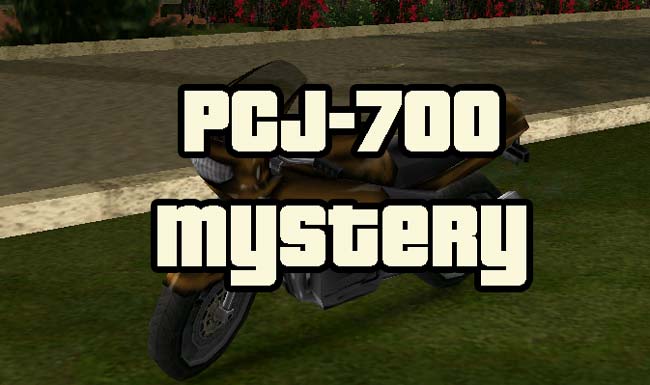 Back when Vice City was first released, I was 12 years old. Way too young to be playing this game, but that made it all the more exciting. Somehow It didn’t turn me into a serial killer. Perhaps it was my age or maybe it was just that Vice City was such an amazing game for its time, but I got very caught up with mysteries. One such mystery was that of the PCJ-700. A superbike that was meant to be everything the PCJ-600 was, but more!

The internet didn’t exist in my house back in 2002, so I didn’t have the means to investigate it and over time I eventually just forgot about it completely. The release of the GTA Trilogy reawoken some old memories long forgotten. I decided I would investigate it and see if I could get to the bottom of the mystery of the PCJ-700.

What I Remember Of The PCJ-700 Mystery

It has been a long time, but I roughly remember it as being a superbike that was an improved version of the PCJ-600. Better handling, speed and you were less likely to fall off of it. To save memory, they used the same model as the PSJ-600, so you couldn’t tell them apart, other than sitting on the bike so the name would come up. The bike was located near the news station. You needed to park a car against the door to the roof and get out. Go upstairs, jump into the easter egg, come back down and the bike would be there.

I forget what the requirements were for you to be able to get this far, but I don’t think they were complicated as I had achieved enough in the game for this bike to supposedly appear.

Here Is What I Found About The PCJ-700

It seems that back in 2002 a PS2 Magazine made a publication about this bike being unlocked when you completed the blood ring races and had 100% completion. Discussion boards were not as abundant as they are now, but this post goes over a lot of the speculation http://www.neoseeker.com/forums/3496/t179485-pcj-700/

I was not able to find a copy of the magazine page, but it seems that it all stemmed from a typo where someone typed in 700 instead of 600. A fairly easy mistake to make and a difficult one to discover when proofreading.

Even though the mystery was debunked fairly fast, it didn’t stop people from obsessing over it. I was one such person who obsessed over this mystery. Any pictures that existed of the bike seem to point toward dead links to websites that no longer exist or just don’t host that image anymore. There are some pictures, but they are just mods at this stage.

I was hoping for something a little more exciting here other than a typo, but sure what can you do. I guess it shows the value of the internet being so easily available to us these days. At least I was able to put the mystery to rest and know that it was all a load of crap, which was fairly obvious before I looked into it.