Vampires are supernatural, human-like creatures that feed on human blood. Vampires were made famous by the likes of Count Dracula and since then, many movies and games have spawned from it. Vampires are known to feed from large beast like fangs.

Vampires feature in Video games quite a lot. The Legacy of Kain series was one of the first to really introduce vampires to the gaming world. Since then, they have become a lot more common in video games. 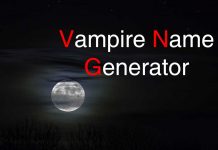 Namegenerator Dan Hastings- October 4, 2019
Vampire names can be quite tricky to come up with when you only have movies and TV shows to inspire you. We all picture Count Dracula sitting up in his castle in Transylvania, but who else? How much does the...