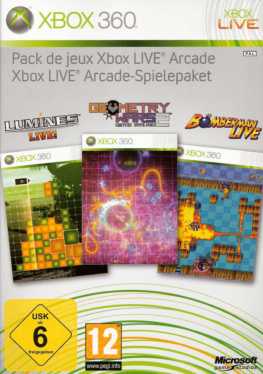 Available On
Xbox 360
Rating
Difficulty
Time To Beat
Watch
Collection
Xbox Live Arcade Game Pack is a package of three Xbox Live Arcade games. The compilation was packaged with a black wireless controller. The disc works by inserting it into the system just like any other game. However, rather than directly launching any of the titles, it adds three items to the Xbox Live Arcade menu with a small disc icon next to each name.
read more
Game Guides
Questions & Answers