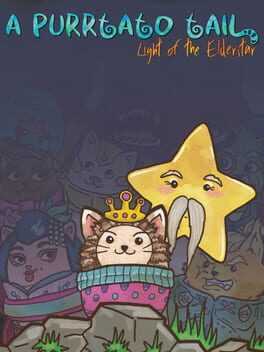 Available On
Linux, PC (Microsoft Windows), Mac, PlayStation Vita, PlayStation 4, Xbox One
Purrtato tail is a character collecting Metroidvania about potato cats that connect together like Velcro and have unique abilities to solve puzzles in the game world. Comedic and filled with character and cats, A Purrtato Tail places the player in the paws of Queen Pixel - leader of the potato cats. Whiskered whispers speak about a race of mysterious bioluminescent creatures whom thrive in the dark, appearing across the Isle of Moar. The existence of the Nightshades proves to be real when they burst forth from the shadows, igniting their secret plan by kidnapping Queen Pixel's most trusted adviser - the Elderstar. The Queen of Purrtatoes must now venture into the world, navigating treacherous pits by collecting characters, connecting them together to form bridges and ledges. She must solve puzzles within the world itself by utilizing the unique abilities of each character, fight Nightshades with her sharpened claws, and discover the foul secret of the Nightshades' dark plan.

A Purrtato Tail - By the Light of the Elderstar Game Guides

A Purrtato Tail - By the Light of the Elderstar Questions & Answers