Take a break from gaming and test your knowledge of video games with these online gaming quizzes. All of the quizzes cane be found in the list below. At the moment there are two types of quizzes. The standard trivia quiz where you will need to answer a question and the answer will be right or wrong. The second type is a personality quiz. This will present you with questions or decisions and at the end it will tell you something about yourself based on the way that you answered the questions.

Quizzes are open for everyone to play and it is also possible for users to create their own quizzes. Using the submission form you can create either of the two types of quizzes available. Just remember to keep it related to the content of the site. 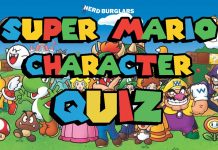 Mario is likely the most iconic video game character of all time. His origin stretches back to the beginning of Nintendo. With dozens of games and spinoffs over the years, he is a character that is instantly recognizable to anyone, whether they are a gamer or not.

One of the most impressive things about the franchise is how it has managed to not only stay alive all these years, but remain so entertaining. The Super Mario franchise has become a titan of the video game industry.

Since there is so much history to write a Super Mario trivia quiz on, I ended up making this a much bigger quiz than usual. Enjoy! 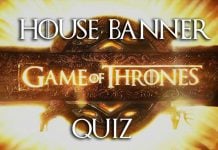 Dan Hastings - March 11, 2019
Knowing the various family flags in Game of Thrones can be tricky, just ask young Bran Stark! Like many families throughout history, crests of some kind were used as a way to represent them on flags, letter seals and of course, their social media pages #medievalselfie. Time to get back on topic. The banners in the Game of Thrones universe are designed around the overall theme of the show. For a lot of the designs, you might be able to guess, simply from the image. For others, the families are not as well known and it can be difficult. I think most of us will recognize the Stark and Lannister designs...so don't go getting those ones wrong! The questions are listed below. Each flag has four possible houses that they could belong to. The correct answer will appear as soon as you select an option. No cheating now! 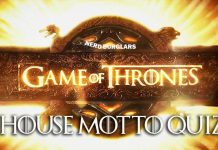 Dan Hastings - March 10, 2019
House motto's in Game of thrones can be a bit obscure at times. They don't always make sense and when there is constant war and action (both kinds ;D ) it gets easy to filter them out. The only time the motto's were really given direct attention was when young bran was learning them off, or when he was unwilling to learn them! How well do you think you know the mottos of the houses in Game of Thrones? Now is your chance to test your skills. The quiz below will present you with a motto and give you 4 possible answers to guess from below. Some of these are MUCH harder than others, so make sure you have your A-game on for this one! 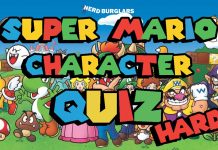 Dan Hastings - March 10, 2019
Super Mario has become one of the worlds largest video game franchises. Mario is Nintendo's leading mascot and has appeared in countless games over the years. Even for the most passive gamer, the characters from the Mario games are almost considered a household name, but this quiz is not for those characters. Whether you are a long term Nintendo fan or someone who just plays Mario Kart, you should be able to identify all of the characters in this quiz. You might know them to see, but can you name them all? If you have already completed the first Super Mario Character Quiz and found it too easy, this quiz might give you more of a challenge. Click the button below to get started

Dan Hastings - March 10, 2019
The Super Mario franchise has become one of the biggest franchises In video game history and is most definitely the biggest franchise owned by Nintendo. Mario has featured in dozens of titles since his original launch back in the early 1980s. Since then, the franchise is become a household brand for those who are unfamiliar with the video game industry. For the first every quiz on this website, Super Mario seems like a perfect topic. This quiz will test your knowledge of the characters in this iconic game franchise. Once you click the "Let's Play" button below, the quiz will begin. You will be presented with an image and you must name the character. Simple as that! Once you have mastered this quiz, why not check out the harder Super Mario Character quiz?!