The Nintendo DS hit the market and was a massive game-changer for handheld gaming. Not only did the device have two screens, but one of those screens was a touch-sensitive. The name for the DS came from the Dual Screen aka DS setup the hardware had. The handheld device went on to become one of the biggest sellers in many years and was later followed up by the 3DS.

During its lifecycle, the Nintendo DS was host to a huge catalog of fantastic video games, some of which saw their first launch, Nintendogs being one example.

Although the DS used a different cart system to the GameBoy devices, the hardware did contain a port to allow the connection of legacy cards to give the DS backward compatibility with older systems.

Below you will find a collection of game guides, tutorials and other helpful guides for games released on the Nintendo DS.

Nintendo DS Help
Get help with issues you might be having. Ask questions or see answers to questions that others have asked
Nintendo DS Guides & Tutorials
Helpful guides and tutorials related to the Nintendo DS 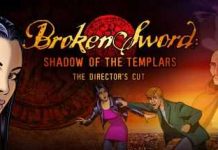 Broken Sword: Shadow of the Templars - The Director's Cut Walkthrough