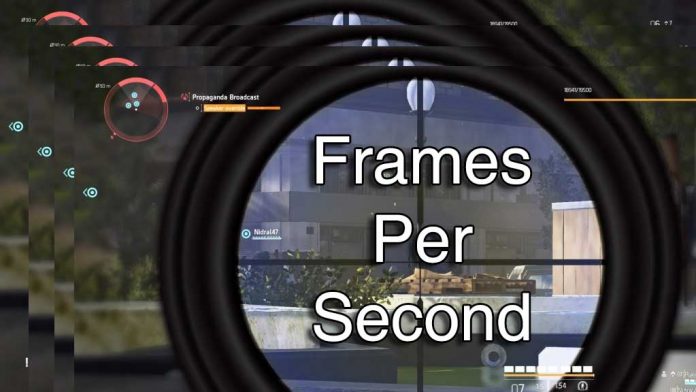 FPS is an acronym that stands for Frames per Second. As you are probably aware, it can often be the cause of many arguments and debates within the gaming community. For those wanting to know what it is, I will explain the technical side of what it is below before going onto why it is something people tend to get angry over so much.

A video is made up of static images which are called frames. If you wanted to show a video of someone doing a cartwheel and only used 5 frames, it would not recreate the video very well and would be more of a slide show than a video. If you did it using 1000, it would result in a smooth video.

Think back to the flip books where you would flip all the pages and it would turn all of the pictures into a moving video. I’m sure most people did it with stick figures on the corner of their copy books back when they were in school. This is a perfect example to describe how multiple static images can create a moving picture.

The concept works the same in video games. When a character jumps, the more static images rendered from the view of the in game camera, the smoother the animation will appear. A jump is a more trivial animation as it requires a single button, for more complex situations, you will need to be able to see the results from your controller input as quickly as possible.

Say you were to jump off a ledge and need to move your character in the air to land on a small platform. You move the stick to move the character while they are in the air. The platform is small, so you will need to make many small corrections to ensure you land on the platform. If the frame rate is very low, there will be a delay in milliseconds between moving your character using the controller and actually seeing it happen on screen. Makes things difficult when you need to make some precise and accurate movements when you are under pressure.

Movies run at 24 FPS and nobody has ever had issues with movies being choppy, why do people complain about games running at 30 FPS instead of 60 FPS?

The answer goes back to what I said about the delay between performing an action on the game controller and seeing the result on the screen. 24fps or even 30fps will provide you with a nice smooth video, but when you are playing a game that requires precise movement, you need accuracy. A few ms can be the difference between getting killed and surviving.

For the vast majority of games, 30fps is just fine. While 60 is better all around, very few games require incredibly precise controller inputs. Games like Ninja gaiden, where a boss can take you out in a single hit, players need to be able to make split second decisions and have the character on screen respond immediately after a button has been pressed. For many other games, this precise input is not required.

The answer is simple, higher frame rates require more system resources. Frame rate is also something that you can’t set a lower limit on. If the system does not have the resources to render enough frames, code will not be able to change this.

You may have experienced frame rate drops in large war scenes with lots of explosions and enemies running around. It can also happen when you enter a large area with lots of things far in the distance (it is a mystery how Nintendo got Breath of the Wild to run so well). Frame rates can drop in these scenarios because the hardware is working to make sure all of the elements in the 3D space are “painted” onto the frame before it is displayed on screen. If there are lots of things on the screen to paint onto the frame, it will take longer to paint. If it takes longer, then the GPU will not be able to produce as many per second as it would in a less intense scene.

Faster GPUs will mean they can paint things to the frame faster. In a quiet scene it could be dealing with 200 FPS. When it gets crazy, it will drop to 100 FPS. The user will never see the difference.

When developing for game consoles, developers must make sure everything is well balanced. There is a finite amount of system resources. They need to make sure that they build an awesome game that can still run well. Ensuring a game runs at 60 FPS will require other visual elements to be sacrificed. Less on screen enemies, lower draw distance, reduced the resolution etc. There are lots of tricks in the book to improve frame rate, but its not a simple process.

If you are still a little unsure about what difference frame rates will make on a game, this video will give you a brilliant example of it. As he says in the video, you must watch the video with 60fps set in the quality, otherwise you wont see the difference. It will cycle through the same scenes with different frame rates to show you what impact they actually have in real time.