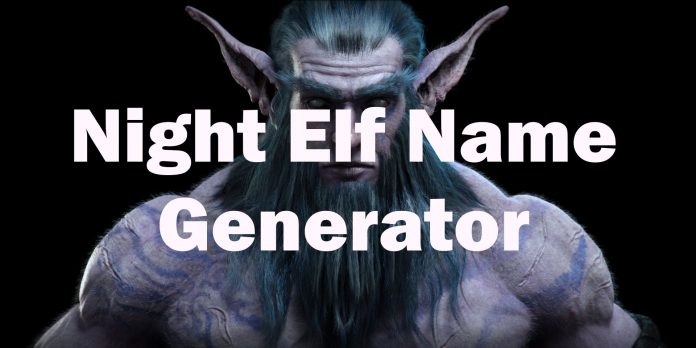 Night elves are a subspecies of elves that have become well known from the Warcraft series. This page contains a Night elf name generator that can be used in World of Warcraft or any other game series that uses these characters.

To start generating names, click the button below. You can use the gender filter to generate night elf names for female or male characters. There is a huge number of possible name suggestions so keep clicking until you get something you like. If you have some good suggestions to improve this tool or want to share ideas with others, add a comment below to help people out.

What is a Night Elf?

A Night Elf is a subspecies of the fantasy Elf that was one of the character types available in Vanilla World of Warcraft ( WOW ). Night elves have a purple color skin and often look more like a dark elf than any other. They are, however, not as evil and share the common traits that you would expect from an elf. Their lifestyle and traits are similar to Wood-elves. They live in the forests but do tend to gather in large, more urban cities. These cities still share a close relationship with nature which makes night elves feel like an extension of the wood elves.

If you are creating a new WOW character in the new classic Warcraft servers, you can use this night elf name generator to give you lots of cool ideas you can use for your male and female characters.

This tool can be used to give you lots of night elf name ideas. Some of the names may be taken, so you will have to modify them slightly to fit your needs. If you have some good suggestions or want to share something awesome that this tool has suggested to you, leave a comment below.