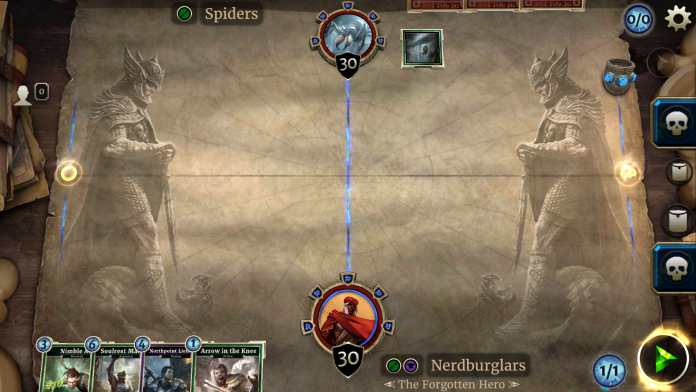 The Elder Scrolls Legends is a collectable card game that is based in the Elder Scrolls Univers. You bring a deck of cards into battle and use the abilities of these cards to fight others in a card battle. The concept has been around for a long time and translates very well to the digital realm. As you can probably guess, the cards, opponents and main setting are based on the Elder Scrolls universe. If you have played any of the games in the series, you will identify with a lot of the content in the game. It has been a while since I have a CCG and I was excited to see what Elder Scrolls Legends would be like. I love the Elder Scrolls franchise, so the bar was raised a little high in terms of the lore and what to expect from the game, but overall, I can’t say that I was let down.

Legends does a good job at taking the lore and content from the Elder Scrolls universe and turning it into a card game. The cards and abilities have a lot of direct links to creatures, species, weapons and lots of other things from the Elder Scrolls universe. This was a lot of fun as it sort of helped you have an idea on how to build a good deck based on knowledge I had obtained from previous games. 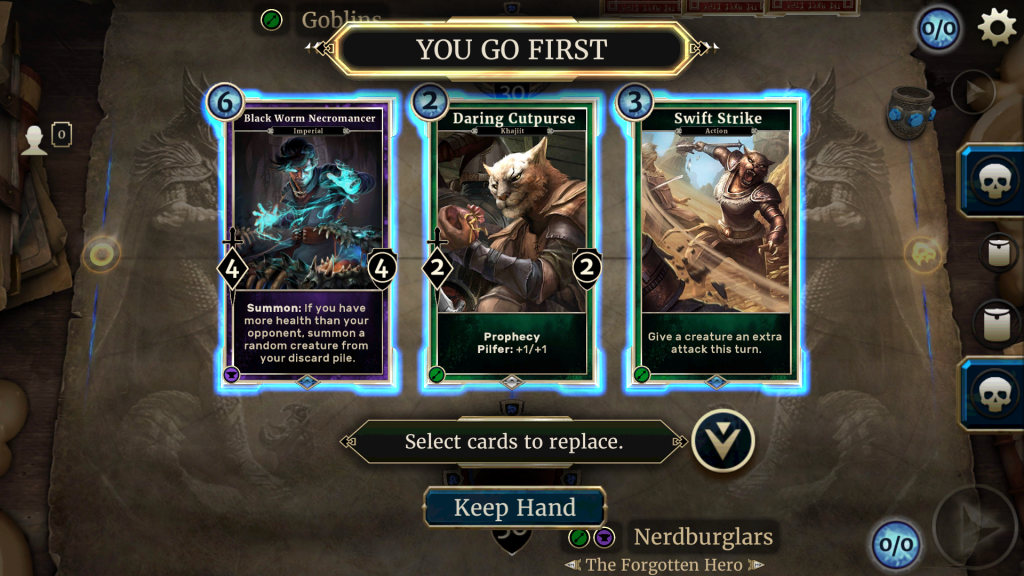 The Elder Scrolls is made up of 5 main games and 1 spin off MMO called Elder Scrolls Online. This long history is reflected in the variety of cards available. You start off with a lot of cards already and as you progress through the game, either levelling up or progressing through the story, you will unlock new cards. There is also a digital store where you can spend real money to purchase additional cards. I found the price to be a little on the high side here considering there is a chance you could purchase a pack and get nothing good, but I guess that was also a risk with collectable card games before it went digital.

The game has a main story and as of right now, there is 1 additional expansion available that adds a new set of story missions. The gameplay itself contains almost no story, the story comes in the form of an attractive cut scene before the game starts. While I would not consider it the most gripping story in the series, it is still entertaining. For a card game with minimal means to tell a story, the game does a very good job at it. The art work and voice acting are both nice and the cut scenes have obvious effort put into them.

The gameplay is quite simple to grasp. You bring a deck into battle and you are randomly given a new card each round. This random luck can make or break a game. You can have the best deck in the world and still fail if the cards don’t work in your favour. The battle field is split up into 2 segments. Cards on the left cannot interact with cards on the right, but they can both attack the main opponent in order to defeat them. This was interesting, but I don’t know if it was really better than what we see with Hearthstone. It felt like you had to play 2 smaller games at once, splitting your resources between both rather than having one large battle. You get used to it, but it would have been better if this was an option that you could choose rather than being forced to use it. 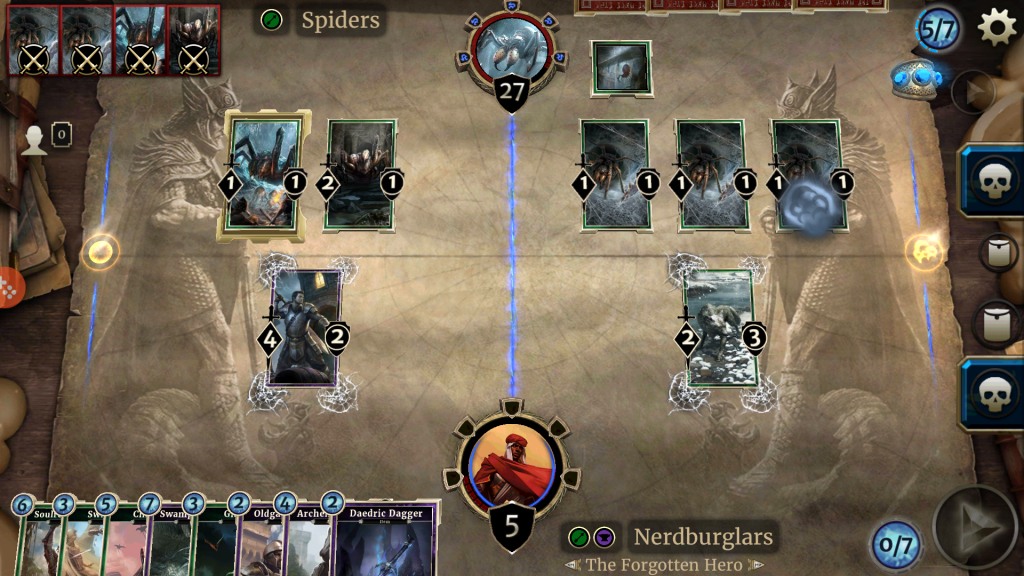 Luck of the draw is what defines a win and a loss for most people in games like this, but I couldn’t help but feel the game is always rigged in the AIs favour. During the story missions, the AI opponent always seems to get the perfect hand and has an unlimited amount of perfect cards available. You can play the same mission multiple times and the opponent doesn’t appear to get a bad hand. I found this quite frustrating when I was getting stuck on missions and the cards I got were consistently poor. Quite often 3 or 4 rounds would pass before I have a card I can use and in this time the opponent is absolutely pummeling me. This took a huge amount of fun away from the story mode. These games are only fun because it could go either way depending on your hand. When the opponent always has a good hand, no matter what, you need to have a better hand, which means you play the same mission many times over. Generally, this forced me to make decks with larger amounts of low level, weak cards which of course takes the fun away when you want to be able to use the powerful cards.

While I felt the story mode was rigged and less enjoyable, the multiplayer game modes were a little more fair, to a degree. When you play against other humans, the game will, of course, be fairer and be more like a normal card battle. The downside I found here was that a lot of players have paid money for good decks and as a result, kick the asses of those who have not. The classic pay to win structure that plagues games and it really is noticeable here. Thankfully there are ways to get more cards without real money, but it takes time. Daily challenges and story mode quests will help you build up a stronger deck if you are willing to spend the time and deal with a little frustration.

7/10
I found The Elder Scrolls: Legends to be an enjoyable game for the most part. I found myself getting frustrated a few times when things just felt unfair with AI opponents. It does hurt the game, but with some persistence, it is always possible to win levels if you shuffle your deck a bit. The story and narrative elements to the game were a nice addition to the story mode. The voice acting was a nice addition that helped give the game a more professional feel compared to what we see with most mobile games. ES Legends is not a perfect game, but it is a good attempt at replicating the success of games like Hearthstone.
Pros
Cons