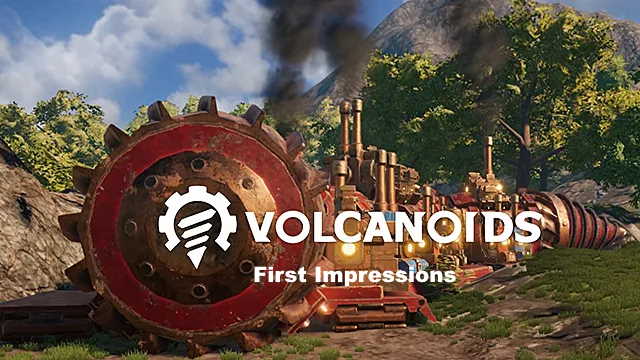 Games set in a Steampunk era have a natural magnetism for many gamers out there. Machines and technology that may defy science, often make practical sense to the average Joe. Volcanoids gives players access to a giant drilling machine that can bore down underground and quickly travel across the map. Does the science make sense, hell no, but you can’t say this doesn’t sound pretty interesting!

Volcanoids allows you to play solo but is designed and is best enjoyed when played with others. Fear not, if you do not have people to play with, there is a matchmaking system that will allow you to join other games in progress.

The core concept revolves around your drilling machine. It is your engine for progress. You must defend it from attack as it is your source of various machines and it is your transport to new areas of the island. If you let it get badly damaged, it could be game over because you are running around an island that has a volcano that is regularly erupting.

The idea of a volcano erupting every 30 mins or so (depending on the difficulty) is pretty cool. It does get annoying when you are doing well, but it adds a fun sense of urgency to everything you do. Sprinting back to your drill with seconds left until eruption is a lot of fun on its own. You will naturally try and squeeze that one extra task in before eruption as you get more familiar with the game. This element only gets more exciting as you play.

Playing With Others Is Essential

Solo play is possible and while it is fun, it gets a little annoying when you are far from your drill and find it is under attack. You can build some automated turrets to help the drill defend itself, but this is not an efficient form of defence. There is no real replacement to playing the game with others. For those who have a solid group of gaming buddies, this game could be a right little gem for you to sink your teeth into.

Another aspect that makes other players essential is the complexity of actually running and maintaining the giant drilling machines. The biggest problem, in particular, is how complex they are to use. Although it is absolutely awesome that you feel like Doctor who flying the Tardis, the system is far better suited to VR. When you are under pressure for time and you have to pull this and twist that, it feels like you are just wasting time. Particularly when you are under attack and need to defend. Hence, why backup is useful.

It is completely possible to survive solo but it just feels like the game is designed with teams in mind rather than solo players.

The Future Is Bright For Volcanoids

Volcanoids is currently quite rough around the edges. If it were 10 years ago, when people were looking for the next big thing after Halo 3, Volcanoids could have been a viral sensation. With a crowded market today, Volcanoids doesn’t yet have what it takes to cut through the noise but it sure as hell has a volcano filled with potential.

The core game is pretty solid. It almost feels like the classic Return to Castle Wolfenstein multiplayer buzz where the goal was not to kill but to complete objectives and kill in the process. Shooting and killing is part of the fun but you also have to build, repair, salvage and explore. All with the volcanic eruption that will wipe you out if you do not prepare yourself.

The sense of excitement as to what you will stumble upon when drilling is going to be a source of endless potential. The drill can take you anywhere without the developers having to worry about a seamless transition that makes perfect sense. One minute you are in a sunny forest, next thing you are in some underground mine with endless tunnels to explore.

Volcanoids is in early access so we can expect it to keep getting better as time goes on. The game’s developers have a pretty solid looking game plan ahead of them. IF you pick up this game and enjoy it, you can be sure the game is going to have some pretty stellar updates in the coming months.