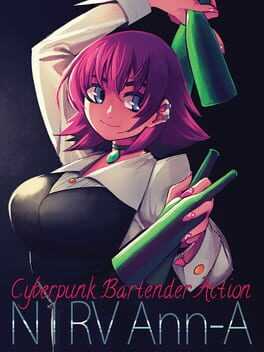 Available On
PC (Microsoft Windows), PlayStation 4, Nintendo Switch
Rating
Difficulty
Time To Beat
Watch
Collection
"Escape from VA11 HALL-A’s Glitch City to Saint Alicia, an idyllic tourist paradise with an upscale bar called N1RV Ann-A. But opulence and extravagance are merely smokescreens: the artificial island hides a seedy underbelly. Its dystopian economy touches all aspects of life as bar patrons contend with mafia extortion, human trafficking and other sordid crimes. For bartender Sam, trouble hits close to home. Her relationship with her partner Leon, who moonlights as a Yakuza, is on the rocks as she works hard to care for their 8-year-old son, Tony. Is their relationship dead in the waters of the caribbean sea? Or will love prevail in the unnatural city?"
read more