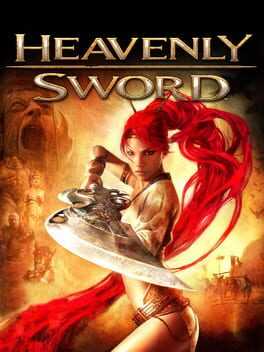 The gameplay of Heavenly Sword resembles a martial arts title focused on melee combat while featuring opportunities for ranged attacks. The main character, Nariko, uses a weapon called the "Heavenly Sword" which changes into one of three forms depending on what attack stance the player uses as part of a unique fighting style. Speed Stance provides an even balance between damage and speed, where the sword takes the form of two separate blades. Range Stance allows fast, long-range, but weaker attacks, with the sword being two blades chained together. Power Stance is the most powerful, but slowest style, where attacks are made with the Sword in the shape of one large, two-handed blade.

For exploration and certain battles, the game also makes use of "quick time events" (QTE). During a QTE, a symbol for a certain button or for an action such as moving the analog stick to the right or left appears on screen and the player must match what is shown to successfully complete the scene.

In addition to Nariko, a secondary character, Kai, is controlled for some portions of the game. Many of Kai's stages take the form of sniping missions, using her crossbow to pick off enemies, in some cases to protect characters. While Kai cannot perform hand-to-hand combat, in stages that call for her to explore the level she is able to hop over objects and to free herself from an enemy's grasp by temporarily stunning them.

Projectiles can be maneuvered to their targets using the motion-sensing capabilities of the SIXAXIS controller through a feature known as Aftertouch. Such projectiles include guiding Kai's arrows after she has launched them, and for Nariko, guiding a cannon or rocket launcher, or picking up and throwing objects.